One of my favorite set of posts from the past two offseasons has been the SDPI recap/early preview. Don't know what SDPI is? It stands for Standard Deviation Power Index and is a tool Eddie Epstein used in his book Dominance to rate pro football's best teams. The basic idea is to look at how far above or below average (by standard deviations) a specific team is relative to their conference brethren. Since each team plays the same number of conference games, it can give us a good idea about who the best team was within the conference. However, it cannot tell us which conference is better. But the purpose of these posts is not to determine which conference is superior, but rather project ahead which teams in a conference will be contenders or also rans in the upcoming season. In the first post on SDPI two years ago, I calculated SDPI based on points scored and allowed within conference play. Last season I used points scored and allowed as well as yards gained and allowed. This season, I'm sticking with yards only. The yardage version of SDPI has a better correlation with future performance than points, and including both last season made the post seem (at least to me) quite muddled. Of course, this is by no means, the end all be all rating system, but it can give us an idea of which teams will improve and decline in 2009. After a one week hiatus, we will now move out west and examine the Pac-10. 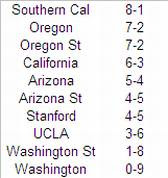 Now here are the 2008 SDPI Standings sorted by total SDPI, with conference rank in offense, defense, and total SDPI in parentheses. 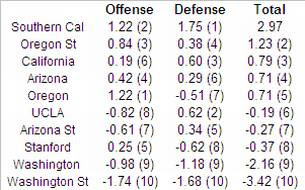 Surprise surprise. The Trojans from Southern Cal were head and shoulders above their Pac-10 brethren. If you took the second place team (Oregon State) and doubled their SDPI numbers they would still be in second place. After the Trojans and Beavers, the next set of teams were just about even. Cal, Arizona, and Oregon are all separated by 8 one-hundredths of a standard deviation. After a little drop off, the next three teams were also eeffectively even. UCLA, Arizona State, and Stanford are separated by only 18 one-hundredths of a standard deviation. Then we have the dregs of the conference. Washington and Washington State combined to go 0-23 against IA schools outside the state of Washington. While the Cougars were able to defeat the Huskies and avoid a winless conference season, they were clearly the worst of the duo over the entire year.

Best Offense: Oregon 1.22
In a photo finish, the Ducks edged the Trojans by a single yard over the course of the Pac-10 conference season. I'm inclined to give the Ducks the benefit of the doubt as well, since they accumulated that extra yard despite having to face the Trojans defense. The Trojans, aside from their eight other common conference foes, got to face an Oregon defense that was much more generous.

Worst Offense: Washington State -1.74
The Cougars averaged under 200 yards per game in conference play. They broke the 300-yard mark only once in conference--against the Huskies in the Apple Cup.

Best Defense: Southern Cal 1.75
The Trojans allowed about 221 yards per game to their Pac-10 foes. Put another way, they made nearly every Pac-10 team look like a slightly better version of Washington State. After opening the conference season getting run over by the dimunitive Jacquizz Rodgers, the Trojans allowed only 206 yards per game to their next eight Pac-10 opponents. Somehow Stanford was also able to run wild on the Trojans (200 yards rushing and 367 total yards). If we remove that game from consideration, their other seven Pac-10 opponents averaged only 183 yards per game against the Trojans defense.

Worst Defense: Washington State -1.68
In five of their nine Pac-10 games the Cougars allowed over 500 yards. Even if we give them a mulligan and only consider their four 'good' games, their defense would only rank seventh in the conference.

Washington State
Just seeing if you were paying attention. Once again, 2009 appears to be the Trojans title to lose. There appears to be three tough Pac-10 games on the docket next season: road trips to Cal, Oregon, and Arizona State. Still, its a pretty safe bet the Trojans take at least two of those, and with the gap in performance between the Trojans and everybody else in 2008, it would take some great improvement, and a little luck, for a team to even share the conference crown with Pete Carroll's boys.

The team(s) you should be buying are...

Washington and Washington State
The good news for fans in the Pacific Northwest is that extreme performances (whether good or bad) are simply not statistically likely to be repeated. The chances of Washington and Washington State performing worse than they did last season is infinitesimally small. Washington State for one, had to deal with an unprecedented amount of injuries. In fact, coach Paul Wulff even held open tryouts for the scout team quarterback in October; something that is almost unheard of at the Division IA level. Washington didn't quite have the injury problems of the Cougars, though they did lose quarterback Jake Locker for the season in the fourth game. The Huskies also had bad luck in another area--close games. They lost three games by a combined 11 points (BYU, Stanford, and Washington State). Locker is expected to return to the starting lineup in 2009 and the Huskies also brought in a new coach with a winning pedigree, Steve Sarkisian, so there is reason for optimism. While both teams were pretty bad last season, the Huskies have a much shorter distance to travel to become competitive. With five conference home games, the Huskies can realistically dream of a bowl bid to cap Sarkisian's maiden voyage. Washington State should improve, but a bowl game seems like a pipe dream. The goal instead should be doubling or tripling last season's solitary conference win.

The team(s) you should be selling are...

???
This may seem like a very cowardly cop-out, but there is no single team in the Pac-10 that I can say without hesitation will have a worse year in 2009. In my opinion, the most likely candidate is Oregon State, but Mike Riley has kept the Beavers near the top of the standing the past three seasons with three very different teams.

The team(s) you should be holding are...

Arizona, Stanford, and UCLA
Arizona would appear to have a lot going for them heading into 2009 fresh off the school's first postseason appearance in a decade. The team was statistically in the top half of the conference last season. However, the Wildcats have a few issues that stand out. First and foremost, they are coached by Mike Stoops. I'm not saying Stoops is a bad coach, in fact, he has done a fine job in rebuilding the Arizona program after the debacle that was John Mackovic. Unfortunately, the Wildcats seems to have several WTF? games each season. Last year it was road losses to a 4-8 New Mexico team (where the Wildcats committed five turnovers) and a 5-7 Stanford team, as well as a last second home loss to Oregon State that kept the Beavers in the hunt for the Rose Bowl. 2007 also featured losses to New Mexico (a 9-4 bowl team) and Stanford (4-8 in Jim Harbaugh's first season), and these were at home. 2006 saw Arizona lose at home to Washington (5-7) and archrival Arizona State (7-6), when a victory in either would have propelled the 6-6 Wildcats to a bowl game. Suffice it to say, don't bank on Arizona to deal well with prosperity. Oh, and I neglected to mention that the Wildcats must replace their all-time leading passer, Willie Tuitama, along with last season's leading receiver, Mike Thomas, in 2009. On the other hand, Arizona was 0-4 in one-score games last season and besides Tuitama and Thomas, returns nearly their entire offense from last season. Be wary of expecting excessive good fortune or disproportionate doom and gloom for Arizona. Another Pac-10 record of 4-5 or 5-4 seems about right. The Stanford Cardinal flirted with a bowl game last season before dropping their final three contests to finish 5-7. There was definite improvement in Year 2 of the Jim Harbaugh era as the Cardinal won four conference games for the first time since 2005. Stanford also defended their home turf very well, going 4-1 in Palo Alto, with the lone loss coming at the hands of the Trojans. Stanford fans have reason to look forward to the coming season with the return of senior running back Toby Gerhart (Stanford's first 1000-yard rusher this century). The running game has certainly improved under Harbaugh as Stanford averaged under 3 yards per rush from 2003-2007 before breaking the glass ceiling and nearly getting to 5 yards per rush (4.89) in 2008. An optimist would also point out the fact that although Stanford was eighth in SDPI, they were within shouting distance of the seventh and sixth place teams (Arizona State and UCLA). Of course the cynic has plenty of ammo as well. In conference games not involving the two Washington schools, Stanford was 2-5 and was outscored by almost 10 points per game. The offense has a passable but decent at best quarterback in senior Tavita Prithard, and though super-recruit Andrew Luck is waiting in the wings, the passing game is still a work in progress. Finally, for all the good Stanford did at home, they struggled mightily on the road. Their lone road win in seven tries came against Washington by seven points. With just four conference home games in 2009, the Cardinal must win some games on the road if they harbor postseason aspirations. What does 2009 hold for Stanford? I wouldn't bet against Jim Harbaugh, as he has made the Cardinal competitive in record time, but a lot has to go right for Stanford to get to a bowl game this season. And what about the Bruins? If it wasn't for the two Washington schools (a common refrain in 2008), the UCLA offense would have been the most reviled unit in the Pac-10. The defense was bowl-ready, finishing second to Southern Cal (though they allowed about 81 more yards per game than the Trojans) in Pac-10 play. The defense should continue to be among the best in the conference with four of the top five tacklers back, including linebacker and All-America candidate Reggie Carter. At least a little improvement can be expected from the offense, as the passing attack ammassed only nine touchdowns to go against 21 interceptions last season. If Kevin Craft, or whoever plays quarterback, can take just a little better care of the ball, and not put the defense in such unenviable situations, the Bruins could climb in the Pac-10 standings. Of course, it is important to mention that two of UCLA's three Pac-10 victories last season came against the Washington schools (surprise surprise). Outside of those games, UCLA's only other conference victory came in a squeaker at home over Stanford (23-20). Like Stanford, UCLA has only four conference home games in 2009, so if they are to improve in Rick Neuheisel's second season, they will have to win some games on the road.
Posted by matt at 4:41 PM

"???
This may seem like a very cowardly cop-out, but there is no single team in the Pac-10 that I can say without hesitation will have a worse year in 2009. In my opinion, the most likely candidate is Oregon State, but Mike Riley has kept the Ducks near the top of the standing the past three seasons with three very different teams."

The Ducks and beavers are not the same. Also, Washington and Washington St. are not both the huskies.

Good catch(es). Proof reading is not my strong suit.