Avid readers of this blog, if they exist, were likely looking forward to the post on Pac-10 SDPI. Alas, with conference tourneys winding down and the NCAA tournament winding up(?), I have been preoccupied. Thus, the Pac-10 SDPI post will have to wait until next week. However, I do have a Pac-10 nugget to share. With Mike Bellotti's shift from head coach to AD last week, I thought it would be a good time to wax nostalgic on his tenure at Oregon.

Bellotti took over as head coach of the Ducks after the 1994 season when Rich Brooks left Eugene for the riches of the NFL. In his 14 seeasons at the helm, the Ducks have posted the second best record in Pac-10 play (see table below). 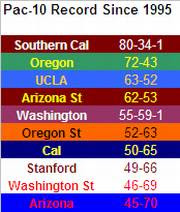 In those 14 seasons, the Ducks played in 12 bowl games (winning half of them). They suffered only a single losing season (a 5-6 record in 2004) after posting seven losing seasons in the previous 14 years. His teams won or shared two conference titles (2000 and 2001) and finished second three other times (1999, 2005, and 2008). His teams won at least 10 games four times (2000, 2001, 2005, and 2008) and never finished worse than 3-5 in Pac-10 play. Every other Pac-10 school has finished at least 2-6 or worse in Bellotti's tenure. Twice, Bellotti had his team in contention for the national championship. In fact, Oregon may have been the better choice to face Miami in the 2002 Rose Bowl, and if not for a tough break (literally) to quarterback Dennis Dixon in November of 2007, his penultimate team may have played for all the marbles. Bellotti didn't build the Oregon program (you can credit Rich Brooks for that), but he did keep it on firm footing and made it better than it was under his predecessor. He is the apotheosis of maintaining and improving upon a moribund program's initial success, and every coach should strive to be like Mike.
Posted by matt at 6:40 PM