In addition to the SDPI posts, another offseason interest of mine has been to look at how each IA conference has shaken out since 2005. I chose 2005 as the starting point because that was the year the ACC expanded to 12 teams, the Big East added 3 new members and booted Temple, Conference USA added a championship game, the Mountain West added TCU, the WAC looted the Sun Belt after several of its members joined Conference USA, and the Sun Belt added 2 independents from Florida (FAU and FIU). Since 2005, there has only been one change in any IA conference. That was the expansion of the MAC by a single team with the addition of Temple. We'll begin with a look at the ACC since 2005. And one final note, each of the statistics posted here are for conference games only (championship games excluded). Since each school plays a vastly different non-conference schedule, this offers a better standard of comparison. So far, we've looked at the ACC, Big East, and Big 10. Now we turn out attention to the Big 12. Here are the cummlative Big 12 standings since 2005. 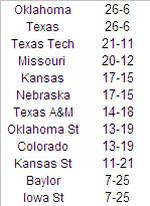 No surprise at the top of the conference, as Oklahoma and Texas have owned the Big 12 for the better part of this decade. The third place finish by Texas Tech speaks to the coaching prowess of Mike Leach, not just because he lacks the tradition of some of the programs below him, but also because he has to deal with Oklahoma and Texas every season. Against other Big 12 teams besides Texas and Oklahoma, Texas Tech is 18-6 since 2005. The best Big 12 North team since 2005 is Missouri, winners of the past two North championships. Remember who won the North in 2005? Colorado. Despite that chaampionship in 2005, the Buffs have a better conference record than only three teams since then. In fact, since that championship season, Colorado has lost twice as many Big 12 games as they have won (8-16 record). 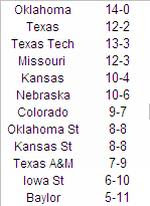 The Sooners have defended their home turf in Norman perfectly since 2005. In fact, the last time Oklahoma lost at home to a Big 12 team was in 2001 to arch-rival Oklahoma State. The other elite teams in the South have also defended their homefield very well, though not quite at the level of the Sooners. The biggest disparity between home and road performance actually belongs to five teams (four of them from the North). Texas Tech, Missouri, Colorado, Kansas State, and Iowa State are all five games better at home. In fact, Iowa State has won only once on the road in conference play over the past four seasons (a 42-14 beating of Texas A&M in 2005). Speaking of the Aggies, their struggles at home are a little surprising. Their home and road records are both 7-9 since 2005.

Now here is how homefield advantage shakes out in the Big 12 (in conference play only) with respect to the nation at large (with rank out of the 11 IA conferences in parentheses).

Homefield advantage has meant more in the Big 12 than any other conference since 2005. That makes sense considering the fact that the Sooners have yet to taste defeat at home to a Big 12 foe since 2005, and that other five teams are five games better at home than they are on the road (with Kansas narrowly missing the cut at four and a half games better at home).

Next up is how each Big 12 team stacks up offensively for each season. This is the ranking of yards per game in conference play. 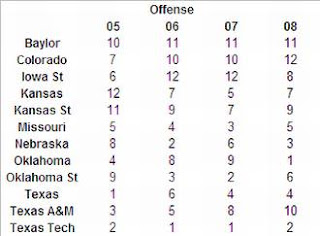 Mike Leach and the Red Raiders have been first or second in offense each season. In the two seasons they failed to grab the top spot, they were outdone by historic offenses than either won (Texas in 2005) or played for (Oklahoma in 2008) the national title. Oklahoma's struggles on offense in 2006 and 2007 are shocking, especially considering the 2006 team featured Adrian Peterson. If you remember though, Peterson missed the final seven regular season games, including the Big 12 Championship win over Nebraska. That team was also quarterbacked by Paul Thompson, a solid, but unspectacular player. The 2007 team's lack of offensive firepower is harder to explain. Sam Bradford led the nation in pass efficiency and the Sooners had two backs top 700 yards on the ground. The main reason for the Sooners low placement is the offensive environment they played in. The past few seasons, the Big 12 has been very condusive to offense, or adverse to defense, depending on where you stand. Nationally, Oklahoma has been a good offense, but when compared to their Big 12 peers, they have been mediocre on occasion. Speaking of mediocrity, Dan Hawkins would killl for a mediocre offense in Boulder. After finishing seventh in the league in offense in Gary Barnett's swan song, Hawkins has yet to develop a consistent offensive attack. In he is unable improve the offense in 2009, he may be on his way out. Its also interesting to note Missouri's relatively unimpressive offensive finishes. With one season of Brad Smith and three seasons of Chase Daniel under center, the Tigers have yet to finish better than third in the conference in yards. 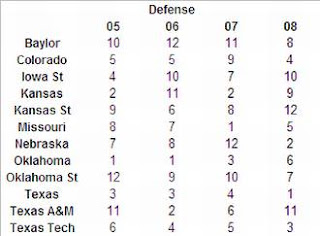 Which season did Missouri put it all together and nearly play for a national title? When they had an elite defense. That season sticks out like a sore thumb when compared with their other pedestrian finishes. Notice how the Husker defense steadily eroded under Bill Callahan (2005-2007) and then rebounded immediately when Bo Pellini became the coach. Oklahoma was anchored by their defense in 2005 and 2006. Imagine if they could have posted those same defensive efforts to match their historic offensive performance in 2008. There would been a great deal of 'best team ever' talk. Kansas went from elite defense in 2005, to also-ran in 2006, back to elite in 2007, to below-average in 2008. Will the trend continue in 2009? Despite all the offensive accolades Mike Leach has garnered at Texas Tech, its clear he also delegates to competent men on the other side of the ball. Along with Oklahoma and Texas, the Red Raiders are the only team to never finish below average on defense in the past four seasons.
Posted by matt at 8:34 AM