It's almost time, can you feel it? We're just a little more than 6 weeks away from kickoff of the 2009 college football season, so its time for my iron-clad predictions for each conference race. Since Twitter is all the rage with kids now, my predictions will come in scrumptuous, bite size blurbs. Rest asured though, a lot of thought, effort, and excel spreadsheets went into these predictons. After the predictions, I'll give you an interesting fact about each team you may not have known, followed by a short statistical prose about a player or team from the particular conference I happen to be previewing. Theres something for everyone here. If all you want is some nuggets of insight, you can be happily on your way, but if you want a more polished look at the conference feel free to stay and read the whole thing. I'm doing this Noah-style, as we'll go two-by-two until the season starts. First off are the ACC and Big East. 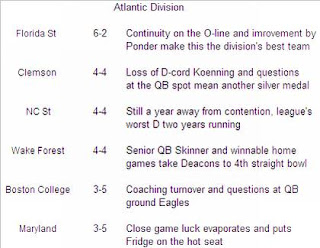 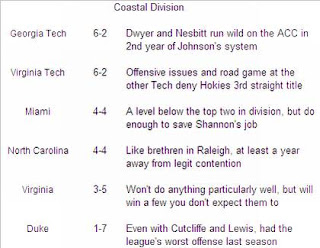 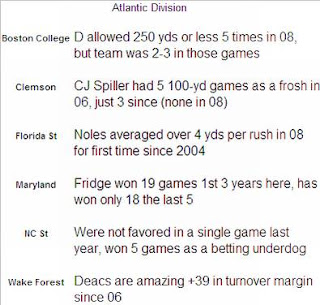 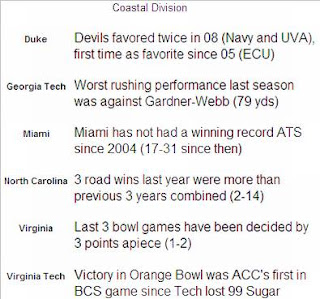 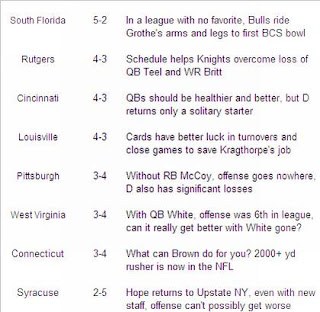 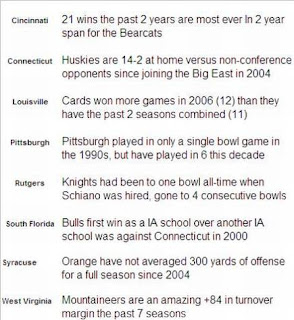 Russell Wilson: An Encore Performance?
Last season Russell Wilson was a big reason why NC State played in their first bowl game since 2005. He was the top-rated passer in the ACC and under his guidance, the Wolfpack had the league's second best offense. He was also dangerous with his feet, accounting for 388 yards and four touchdowns on the ground. However, what Wilson did better than any player in college football last season was avoid throwing interceptions. He threw one solitary in pick 275 passes, for a microscopic interception rate of 0.36%. Robert Hooke would have had trouble seeing that rate. How likely is Wilson to continue his vigilant ways with the football in 2009? To answer that question, I looked at all quarterbacks since 2004 who: were underclassmen that returned the folllowing season, threw at least 200 passes, and had an interception rate of 1.5% or less. I had to use 1.5% as the cutoff point because if we drop it any lower, there would be practically no sample. Wilson was certainly operating on a different level in 2008. Those criteria gave us 10 gentlemen: Omar Jacobs (Bowling Green 04), Reggie McNeal (Tx A&M 04), Matt Leinart (So Cal 04), Rudy Carpenter (Ari St 05), Stephen McGee (Tx A&M 06), Colin Kaepernick (Nevada 07), Drew Weatherford (Fla St 07), Tom Brandstater (Fresno St 07), Nate Davis (Ball St 07), Cullen Harper (Clemson 07). I threw out Weatherford because he didn't play significantly the following season (23 pass attempts as Christian Ponder took the reigns of the offense). Here are the combined stat lines of those 9 quarterbacks (sans Weatherford) in their low interception year along with Wilson's from last season.

The first thing that jumps out at you is those other players were much more accurate passers than Wilson. Their combined completion percentage is nearly 8 percentage points better than Wilson's. Of those 9 players, only McNeal (58.1%), Kaepernick (53.8%), and Davis (56.5%) completed less than 60% of their passes. In fact, the 9 combined quarterbacks bested Wilson in every category except interception percentage. They averaged more yards per pass, threw touchdowns more often, and had a higher quarterback rating. Now here is what happened to those players the following season.

On average, the quarterbacks stayed pretty good. Their completion percentage dropped a little, their yards per pass dropped a little, their touchdown percentage dropped a little, their interception percentage more than doubled, and their quarterback rating dropped a little. All the other stats dropped a little , but interception percentage changed the most. Why? I think its safe to say, all these quarterbacks enjoyed a modicum of good luck in their low interception season. Defensive players likely dropped a few picks and some were probably nullified by defensive penalties. In the next season, their luck just evened out. For the most part, these were still good players the following season (Cullen Harper is open to debate), but they were not able to duplicate their extreme performance. The same will more than likely be true for Mr. Wilson. He's already proven himself to be much less accurate than his peers, so a few of those passes that hit the turf in 08 will likely find their way into defender's hands in 09. That's not saying he won't be one of the top quarterbacks in the conference this season, as he most certainly should be provided he stays healthy, just that his interception total will likely 'balloon' at least compared to last season. One final note on this little study. The two players who declined the most from one season to the next, Carpenter and Harper, were also two of the three quarterbacks who had negative rushing totals in their low interception season (Matt Leinart was the other, but he had the benefit of playing alongside a stable full of future NFL players). Could elusive, athletic quarterbacks, be more likely to post low interception totals? Hopefully I'll find some time to answer this query in the near future.

The Big East: A League With No Favorite
Sorry Big East fans, this won't be nearly as in-depth as the last issue. The Big East is by far the most wide-open BCS conference in 2009. Why? Look who's gone. Last season's two leading rushers (Donald Brown and LeSean McCoy) are gone. Syracuse, as if they needed any more bad news, is also without their own 1000-yard rusher from last season (Curtis Brinkley). Last season's two highest rated passers (Mike Teel and Pat White) are gone and Louisville and Connecticut also part ways with their starting quarterbacks (Hunter Cantwell and Tyler Lorenzen). Two of the league's three 1000-yard receivers (Kenny Britt and Dominick Goodman) are gone. The two players with the most sacks (Connor Barwin and Cody Brown) from last season are gone. The two players with the most tackles (Scott McKillop and Tyrone McKenzie) are gone. Three of the four defensive players with the most interceptions (Woodny Turenne, Mike Mickens, and Brandon Underwood) are gone. To say the league is in flux is an understatement. In bigger leagues, the personnel losses wouldn't be as significant, but when there are only 8 teams, attrition is magnified. My projection has South Florida taking the title, but if anyone other than Syracuse or Connecticut wins the championship, I wouldn't be surprised.
Posted by matt at 5:40 PM

you failed to account for greg paulus' arrival on the syracuse campus and its impact on the big east and bcs race. shoddy journalism sir.

I love your site! I also love statistics, although I am a rank amateur. Enjoyed your pieces on SDPI, and think there is a lot of value in the various uses. But, I am struggling to find conference game data for the SEC. Could you point me in the right direction?

Sure. Check out cfbstats.com

thanks...I'm having a lot of fun playing with SDPI....

glad I could be of service

ESPN.com has full box scores going back to 2003. They used to have incomplete info for the 2002 season but I guess they took it down.

You mentioned that you have done some forecasting based on SDPI. Would you ever be willing to post something about that?

Thanks for the info Sam.

As far as forecasting based on SDPI, those conference predictions you see are heavily influenced by SDPI. The real formula is top secret ;), but SDPI is involved.