It's almost time, can you feel it? We're just a little more than 5 weeks away from kickoff of the 2009 college football season, so its time for my iron-clad predictions for each conference race. Since Twitter is all the rage with kids now, my predictions will come in scrumptuous, bite size blurbs. Rest asured though, a lot of thought, effort, and excel spreadsheets went into these predictons. After the predictions, I'll give you an interesting fact about each team you may not have known, followed by a short statistical prose about a player or team from the particular conference I happen to be previewing. Theres something for everyone here. If all you want is some nuggets of insight, you can be happily on your way, but if you want a more polished look at the conference feel free to stay and read the whole thing. I'm doing this Noah-style, as we'll go two-by-two until the season starts. This week, we examine the Big 10 and Big 12.
Big 10 Prediction 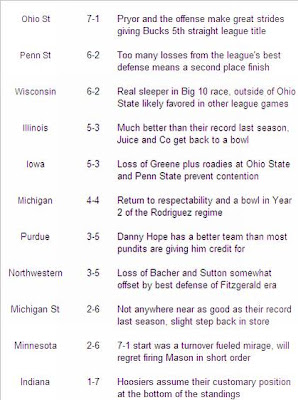 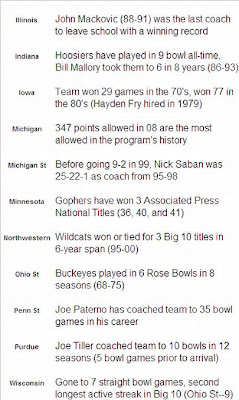 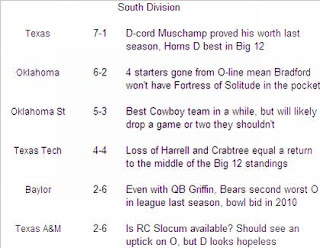 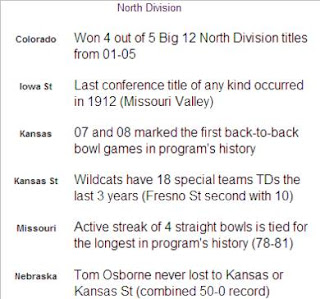 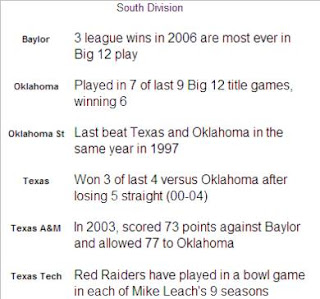 Beating the Workhorse: Javon Ringer
By all accounts, Javon Ringer had a pretty successful senior season at Michigan State. Ringer finished fourth in the nation in rushing yards (1637), fourth in rushing yards per game (125.92), and first in rushing touchdowns (22). The Spartans also won 9 games for the first time since 1999 (10-2). But did his coach (Mark Dantonio) hamper his performance and potentially his NFL future by giving him the ball too much? I think a cogent arguement can be made that he did. In the first 9 games of the season, Ringer carried the ball 300 times and gained 1373 yards for an average of 4.58 yards per rush. Ringer had 6 100-yard games and his low yardage total was 67 against Ohio State; a game in which the Spartans fell behind early and had to abandon the running game in a 45-7 loss. In the final 4 games of the season, Ringer carried the ball 90 times and gained only 264 yards for an average of 2.93 yards per rush. He had only a single 100-yard game and failed to average over 3 yards per rush in the other 3 games. I don't think there is any doubt Ringer tired as the season progressed. Did Ringer really need to carry the ball 34 times in an easy win over Eastern Michigan or 43 times in a shutout of Florida Atlantic? In the four-game span that included the aforementioned games as well as Notre Dame and Indiana, Ringer carried the ball 160 times! In addition, all this work was being piled on a back who is just a shade over 200 pounds and had carried the ball 453 times in the previous 3 seasons combined. 390 totes is just too many to give a college player, no matter how special they are. For point of reference, only 10 times in the NFL has a player been given 390 carries, and their season is of course, 3 games longer. I hope for Mr. Ringer's sake that his career is not irreparably damaged by the beating Dantonio allowed him to absorb. I imagine the Tennessee Titans hope so as well.

Aren't First Round Quarterbacks Supposed to be Good?
Aside from the Raiders selection of Darrius Heyward-Bey, I thought the most questionable first round pick in the 2009 NFL Draft was Josh Freeman by the Tampa Bay Buccaneers. In the last 4 drafts, 10 quarterbacks have been selected in the first round. The chart below lists their numbers in their final season of college ball against BCS conference foes (and Notre Dame). Notice Joe Flacco is not on the list as he played his college ball at a IAA school (Delaware).

Freeman has the lowest completion percentage, the third lowest yards per pass attempt, by far the fewest touchdowns, and the lowest quarterback rating of the bunch. Some might note the relatively pedestrian totals of Jay Cutler and Matt Ryan and posit that Freeman can make a similar transition to the NFL. I disagree for several reasons. For starters, Jay Cutler played at Vanderbilt, a school traditionally lacking top-end talent. Cutler probably fainted when he found discovered the caliber of players he would be able to throw to in Denver. Both Cutler and Ryan also played in conferences more conducive to defense than the 2009 incarnation of the Big 12. Big 12 teams allowed roughly 431 yards per game on average in league play last season. The second most offensive BCS league was the Big 10 where teams allowed about 352 yards per game in conference play. Finally, both Cutler and Ryan were seniors. Freeman left school a year early. Cutler and Ryan were 23 when they were in NFL training camps. Freeman is only 21. Asking him to develop in the professional ranks when he had trouble against Kansas and Colorado does not seem like the foundation on which Super Bowl dreams are built.
Posted by matt at 4:04 PM