It's almost time, can you feel it? We're just a little more than 4 weeks away from kickoff of the 2009 college football season, so its time for my iron-clad predictions for each conference race. Since Twitter is all the rage with kids now, my predictions will come in scrumptuous, bite size blurbs. Rest asured though, a lot of thought, effort, and excel spreadsheets went into these predictons. After the predictions, I'll give you an interesting fact about each team you may not have known, followed by a short statistical prose about a player or team from the particular conference I happen to be previewing. Theres something for everyone here. If all you want is some nuggets of insight, you can be happily on your way, but if you want a more polished look at the conference feel free to stay and read the whole thing. I'm doing this Noah-style, as we'll go two-by-two until the season starts. This week, we examine the Pac-10 and SEC. 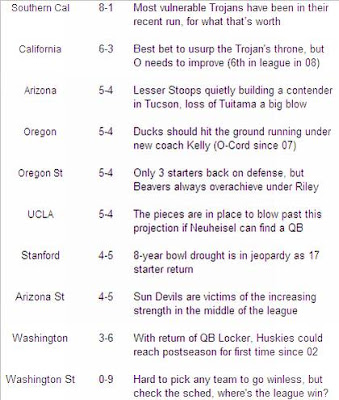 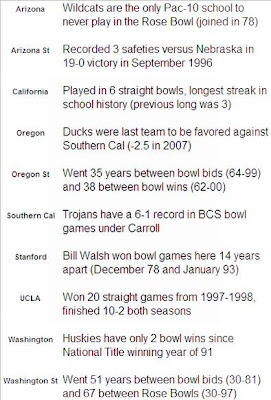 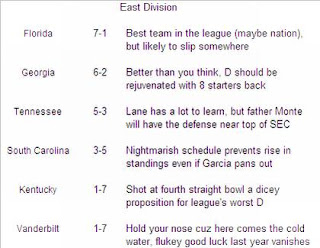 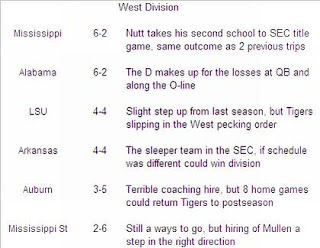 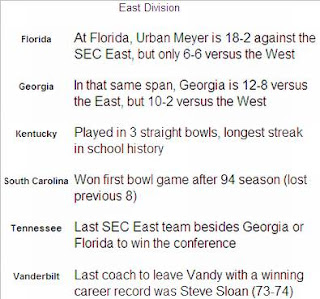 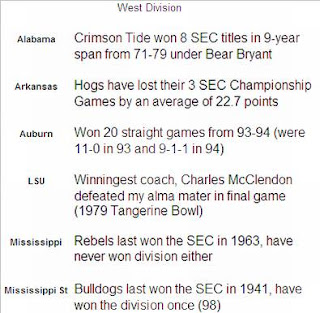 Sgt Stroughter
Over the past three seasons, the Oregon State Beavers have acquitted themselves as the best team in the Pac-10 not named Southern Cal. The Beavers are 19-8 versus conference foes in that span, three games behind the Trojans and three games clear of Oregon and Cal. In addition, the Beavers are the only team to have beaten the Trojans twice in that same time period. One big reason for the Beaver's success has been the play of wide receiver Sammie Stroughter. I am now going to construct an argument, albeit, a potentially circumstantial and arbitrary one, identifying Stroughter as the most important member of the Oregon State offense. The following table lists the Oregon State cumulative team passing numbers from 2005 and 2006.

Why is this important you ask? In 2005, Stroughter was a sophomore who rarely saw the field on offense. He caught only 5 passes all season and was used primarily as a punt and kickoff returner. As a junior in 2006, Stroughter emerged as a playmaker, catching 74 balls for 1293 yards. The team's passing as a whole also improved dramatically. The primary quarterback in both 2005 and 2006 was Matt Moore, who plays in the NFL. It's entirely possible Moore's improvement was simply the natural progression of an NFL-caliber player, but its hard to ignore the effect Stroughter's emergence had on the team's passing game. The next table lists the team passing numbers from 2007 and 2008.

As a senior in 2007, Stroughter played in only four games and caught passes in only two (15 catches on the season). He was able to obtain a redshirt for a fifth season of eligibility. As a healthy fifth-year senior in 2008, Stroughter caught 70 passes and gained 1040 yards. Once again the team's passing fortunes improved with further contributions from Strougter. Just like in 05/06 there was no new quarterback in 07/08. Sean Canfield and Lyle Moevao split time in 2007, with Canfield throwing about twice the number of passes as Moevao. Both were terrible, sporting quarterback ratings of 106.38 for Canfield and 98.77 for Moevao. Both also played markedly better in 2008. Moevao took the majority of the snaps, and posted a quarterback rating of 128.41. In limited action, Canfield posted a rating of 155.78. Again, perhaps their improvement just happened to coincide with the return of Stroughter. Both men are back for their senior seasons in 2009. Keep an eye on how well they perform sans Stroughter. If they regress significantly, it will become increasingly difficult to decry the passing game's improvement with Stroughter as happenstance.

Revenge of the Smith
Know who was second in the SEC in rushing yards per game last season? Know who is the second-leading returning rusher in 2009? They're the same person. Michael Smith from Arkansas was second in the SEC in rushing yards per game last season (behind Knowshon Moreno) and was fourth overall in rushing yardage behind Moreno, Glen Coffee, and Charles Scott. Smith accomplished this feat despite missing two games (the season opener against Western Illinois and the finale against LSU) and playing for an Arkansas team that went only 5-7. Smith is overshadowed, not only because of his somewhat generic last name, but also because of those who came before him. In Smith's first two seasons at Arkansas, he backed up one of the most explosive running back duos in college football history--Darren McFadden and Felix Jones. In 2006 and 2007, McFadden and Jones combined for 5807 yards rushing and 47 touchdowns. While Smith won't come close to matching those prodigious numbers, but he would be a wise choice to snatch up for your collegiate fantasy football team and is a darkhorse contender for the Doak Walker Award, given annually to the nation's top running back. Here are a few reasons why.

1. Despite having a reputation as a quarterback guru, running backs under Bobby Petrino have also posted some pretty good numbers. At Louisville in 2004, top-running back Eric Shelton gained 938 yards on the ground and scored 20 touchdowns. In 2005, top-runner Michael Bush gained 1143 yards and scored 23 touchdowns. Petrino used more of a committee approach in his first (2003) and last season (2006) at Louisville, but if Smith establishes himself as the go-to guy, Petrino will not be shy about giving him touches.

2. Arkansas should be better this season. Last season, Arkansas lost games by 35, 42, and 31 points (to Alabama, Texas, and Florida). Arkansas ran the ball an average of 27 times in those three games. In their other 9 games, the Hogs ran the ball an average of 33 times per game. Fewer blowout losses and more wins mean more runs, and more runs means more potential touches for Smith.

3. The passing game should be better. No offense to Casey Dick, but he wasn't exactly the prototypical quarterback Bobby Petrino desires. For his career, Dick completed about 55.6% of his passes, with 2008 his best season at 57.4%. At Louisville, Petrino's quarterbacks never completed fewer than 60.5% of their passes over an entire season. Stepping in to replace Dick is Ryan Mallet, the top-rated recruit from 2007, who began his career at Michigan. I'd wager any amount that Petrino is able to coax at worst a solid season, and potentially a great season, out of Mallet. And if opponents have to fear the passing game for the first time since the days of Clint Stoerner, that should open more lanes for Smith in the running game.

4. Smith has value as a receiver. No, he's not Reggie Bush, but Smith was second on the team in catches last season (32) and sixth in yards (298). From the looks of things, a lot of those were dump-offs from Dick, so he may see his catches drop, but with the defense likely concerned with bigger threats further down the field, he could see his yardage and touchdown totals increase.

If he can stay healthy, Michael Smith may just well be the best running back in the SEC in 2009.
Posted by matt at 4:03 PM

How are you putting LSU at 4-4? Do you have them losing all of their big games (UF, UGA, Ole Miss, Bama) or do you think they'll pick up one there and drop one to a lesser team?
Last year was pretty much a nightmare and this year's schedule is beastly, but the Tigers have way too much going for them to not finish above .500. Jarret Lee was 14/16 TDs/Ints (7 of which were returned for TDs). That's not going to happen again. LSU had the worst pass defense in the conference. That's not going to happen again either. Expect the Tigers to split those four big games and maybe if they're worn down from the schedule they might drop another along the way. I'm not sold on Alabama, Ole Miss, or Georgia. Don't be surprised if LSU wins the West at 6-2.

Sam, good points as always, but I'm inclined to disagree with you on this issue.

My projection system doesn't 'pick' games, at least in the since that it assigns a winner and loser to each. It gives a probability of victory for each team, and when the probabilities of victory are added up for LSU, they equal 4.2. Of course, this rounds down to 4, and with some of the projections, I have made manual adjustments if they didn't 'seem' right. LSU's does seem right to me for several reasons.

1. I think people are reading too much into their bowl beatdown of GT.

2. The schedule. Even if they split that 4 game juggernaut with Fl, Ga, Miss, and Ala, I could still picture either Arkansas or Tennessee upsetting them. IMO, the only gimme is Miss St.

3. I think Pelini was responsible for the great peformance by the defense. Just look at how much worse they got when he left (and how good Nebraska's D became). Chavis is certainly a capable D-cord, but as recently as 07, his Tennessee D was the worst in the SEC.

4. I don't think Miles is that good of an in-game coach. Even in the title year, the Tigers lost to Kentucky and Arkansas. I think his penchant for gambling will come back to bite him sooner or later.

I think LSU's ceiling is 5 wins, and that could conceivably be enough to win the west, but I wouldn't bet on it.

While I agree that John Chavis is no Bo Pelini (or Will Muschamp for that matter), he has had plenty of success. Granted most of it was nearly a decade ago, but he's certainly going to be an improvement from last year's bizarre co-DC experiment. Combining improved defense and quarterback play that at the very least should be average instead of "OMG WTF Why am I crying?" bad LSU has a real chance. I think there are a lot of question marks across the SEC. Like I said before, I'm not really buying Ole Miss, Bama, or UGA as elite teams. You can throw LSU in that pile too. One or two of those teams are going to step up while some may be very disappointing (cough Ole Miss). In my fan-biased perspective, LSU's the team that will wind up having the right stuff. Also, we thankfully aren't playing Tennessee this year. Our third draw from the east is Vandy, which should be a much easier game.

As for Les Miles, I think he's cleverer than he appears. Over the last 4 seasons the Tigers are 14-5 in close games, have four blowout wins in bowl games, and a national title. When it comes down to it, Les wins (a lot) more than he loses, which is good enough for me.