Thus far, in our offseason half-decade look back, we've examined the ACC and Big East. Now we move toward the mid-west and the Big 10 (11). 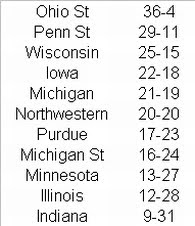 While the Trojans from Southern California get a great deal of the national pub for 'dominating' their conference, its clear the Buckeyes have also been on quite a roll over the last 5 years. Ohio State is 7 games clear of their closest competitor (Penn State), and their worst finish in that span has been a tie for first. Minnesota and Indiana are the lone Big 10 schools to not post a winning conference record in the past 5 seasons. The Golden Gophers finished 4-4 in 2005, while the Hoosiers best finishes were consecutive 3-5 marks in 2006 and 2007. Two teams have gone winless in league play, Illinois in 2005 and Minnesota in 2007, and only one team has gone unbeaten (Ohio State in 2006). Besides Ohio State, Penn State is the only Big 10 team to not have a losing record since 2005. Their worst finish was 4-4 in 2007. 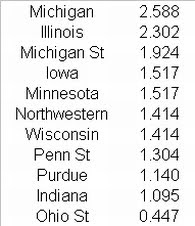 The most inconsistent Big 10 team in the past 5 years has been Michigan. The Wolverines were 18-6 in league play from 2005-2007, but are just 3-13 since. The second most inconsistent team is Illinois. In the past 5 years, the Illini have a winless conference campaign on their ledger as well as a second place conference finish that earned them a Rose Bowl berth. The most consistent Big 10 team has also been the best team. Ohio State finished 7-1 four times in the past 5 seasons, and in the other year went 8-0. 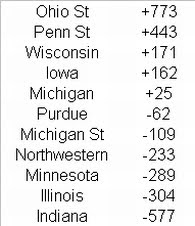 These numbers line up pretty well with the actual standings. Ohio State once again stands as the most dominant Big 10 team, outscoring their conference foes by over 19 points per game since 2005.

Please note that this does not include shared titles. Iowa is conspicuously absent from this list despite tying for a pair of titles in 2002 and 2005. The real travesty is that the 2002 undefeated Big 10 team never got to face off against the undefeated Buckeyes from the same season. I bet you had forgotten about the pair of titles won by Purdue and Illinois at the beginning of this past decade.

And finally, what was the biggest takeway from the 00 decade in the Big 10?
I would say it was the death and subsequent resurrection of Penn State football. If you asked most football fans in the middle of the 2004 season if Joe Pa would still be coaching at the dawn of the next decade, the answer would likely be 'absolutely not'. Penn State was 16-24 in the Big 10 from 2000-2004 (26-33 overall) with just a single bowl appearance and had lost 13 of 16 Big 10 games. Since then, Penn State is 29-11 in the Big 10 and 51-13 overall with 5 consecutive bowl appearances and a pair of conference titles.
Posted by matt at 6:51 PM