A few weeks ago we looked at the last half-decade in the ACC. Now we'll move to the league the ACC plundered and left for dead in the mid-00's, the Big East. 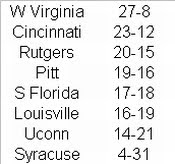 I was a little surprised West Virginia still has the best league record since 2005. In the 2 seasons Bill Stewart has been at the helm, the Mountaineers have continued to play well in the league, going 10-4. Against teams not named Cincinnati, the Mountaineers are 10-2 in that span. In fact, of the Mountaineers 8 league losses in the past 5 seasons, 7 have come to either Cincinnati (2), Pitt (2), or South Florida (3). The other loss came to what used to be known as Louisville. After winning 14 of their last 15 conference games, the Bearcats from Cincinnati rose up to take the silver medal. West Virginia is the only Big East team to not have a losing record since 2005. Not surprisingly, Syracuse is the only Big East team to not have a winning record since 2005. The most inconsistent team has been Louisville. From 2005-2006, the Cardinals went 11-3 in Big East play and seemed poised to be a national player. Since then, they are 5-16 in league play, besting only Syracuse over that period (3-18). Speaking of the Orange, they are the most consistent Big East team over the past 5 seasons. After going 0-7 in league play in 2005, the Orange have been remarkably consistent since, notching a single Big East win in each season. West Virginia has also been very consistent, following up their 7-0 campaign in 2005 with 4 straight 5-2 league records. 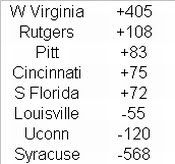 In this methodology, the Mountaineers come out head and shoulders above every other Big East team. Their point differential is nearly 300 points better than 2nd place Rutgers. Teams 3-5 are clustered very closely together, with only 11 points separating 3rd place Pitt from 5th place South Florida. The main reason why Cincinnati is so far ahead of South Florida in the actual standings (+6 games) despite having a nearly identical scoring differential is their performance in one-score games. The Bearcats are 11-6 in one-score conference games since 2005, while the Bulls are only 2-9.

And finally, what was the biggest takeway from the 00 decade in the Big East?
History is no barrier to success, particularly if no one in the conference has a great history. Of the 8 current Big East teams, Pitt and Syracuse are the only 2 that can claim a national title. Pitt has 6 with their most recent coming in 1976, while Syracuse can claim the 1959 title. At the beginning of this decade, Rutgers was a perennial doormat, Cincinnati and Louisville were on the outside looking in at big money leagues as members of Conference USA, South Florida was still playing IAA ball, and Connecticut had just made the jump to IA. West Virginia had some moderate success under Jim Carlen, Bobby Bowden, and Don Nehlen, but nothing like the spoils they enjoyed under Rich Rodriguez from 2003-2007. I didn't include them in the above table, but West Virginia was actually the co-champions in both 2003 and 2004, giving them a technical run of 4 titles in 5 seasons. Who knows what the future holds for the Big East, but the conference appears to be in much better shape than was imagined when re-allignment began in 2004.
Posted by matt at 4:54 PM

I'm not sure it's fair to characterize Don Nehlen's years at WVU as moderately successful. Nehlen had two undefeated squads, something RichRod can't claim. Nehlen coached to the Mountaineers to the defacto national championship game in 1988,but lost to NC Notre Dame. The second undefeated squad faced Florida in the 1993 Sugar Bowl.

Which was insane because of the score of the head-to-head game. Didn't WV hang like 66 points on them?

WVU and UConn didn't share a title. If there's no title game, the heads up contest determines the winner.

It's cute to see UConn fans trying so hard though.

It's funny because UConn beat South Carolina a 7-5 SEC team while WVU couldn't the noles, a 6-6 ACC team in the Gator Bowl. It's because of you the Big East lost the Bowl Challenge Cup.

The head to head game does not determine the conference champion. It determines who plays in the BCS game. WVU and UConn shared the title even though UConn lost to WVU 66-21.

With regards to BE champions count again...

You guys trying to downplay WVU's success are ignorant.... Especially the person saying things about WVU losing to FSU.....

If it wasnt for WVu this league wouldnt even have a BCS bid....

I used the head-to-head matchup to determine the conference champ. Notice I only mentioned WVU's shared titles in passing. I don't mind if you disagree, but seeing as how there have been 10 seasons of Big East play from 2000-09, I didn't feel like it would be right to list 17 Big East champs.