Moving right along through major college football, we come to our second conference, the Big East. If you want to remember how clairvoyant I was last year at this time, here's the link to the Big East SDPI review from 2009. Before we jump into this edition of SDPI, let me go ahead and warn you to be sure you are sitting down. One of the results will certainly shock. I almost dropped my abacus, and certainly checked and rechecked my work when I saw it.

To refresh your memory, here are the 2009 Big East standings. 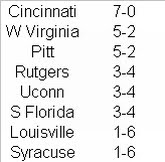 Now here are the 2009 Big East SDPI standings. The standings are sorted by total SDPI with ranking for each category (out of 8 teams) in parentheses. 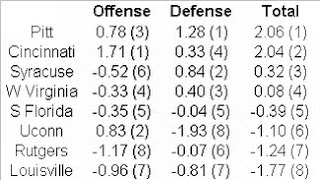 Obviously, the huge shocker I was referring to earlier is the ranking of the Orange from Syracuse. Thanks to a superb defensive ranking, the Orange rated out as the 3rd best team in the league despite winning only a single conference games all season. How is that possible? Is the ranking system screwed up, or was Syracuse really better than you thought they were? I'm inclined to say that the Orange were a little better than you thought, especially on defense. On offense, the Orange were nothing special, ranking 6th in the league, ahead of only Louisville and Rutgers (!? more on the Knights later). In addition to this, the Orange offense under former Duke hoopster Greg Paulus repeatedly put the defense in harms way via the turnover. The Orange had the worst turnover margin in Big East play (see chart below) by a pretty healthy margin. 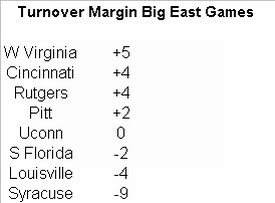 Paulus threw 10 picks in 7 Big East games (versus just 6 touchdowns). Here are just a few examples of how the offense (and occasionally the special teams) hung the defense out to dry. In their Big East opener, the Orange held the South Florida Bulls to 333 yards of offense, but also committed 7 turnovers, including an interception that was run back for a touchdown in a 14 point loss. In mid-November against fellow cellar dweller Louisville, the Orange held the Cardinals to 151 yards of offense, but botched an extra point and gave up a huge 44-yard punt return late in the game that set up the winning score to allow the Cardinals to escape with a 10-9 win. In their season finale against Connecticut, the Orange outgained the Huskies by over 100 yards (489-377), but allowed Connecticut to return both a kickoff and a fumble for a touchdown in a 56-31 loss. Later on, we'll discuss how likely it is that Syracuse can maintain their solid defensive play in 2010. Elsewhere in the Big East, Cincinnati and Pitt were almost as close statistically as they were on the field in a game the Bearcats won thanks to a missed Pitt extra point. SDPI likes the Panthers just a hair more, but statistically speaking, its a wash. One other surprise in the SDPI rankings is the lowly position occupied by Rutgers. Only Louisville ranks lower in SDPI.

Best Offense: Cincinnati 1.71
Brian Kelly's Bearcats moved the ball at will against everyone in the Big East. They opened the season with a 564-yard and 45-point performance at Rutgers and continued their domination no matter who played quarterback. The 2nd best offense, Connecticut, was less than half as prolific as the Bearcats.

Worst Offense: Rutgers -1.17
While they were not historically bad (the -1.17 is the highest lowest offensive rating for any team in 2009--hooray), the Knights did lay a few eggs in 2009. They netted 130 yards of offense in their blowout loss to Syracuse, and managed only 218 yards in the regular season finale against West Virginia.

Best Defense: Pitt 1.28
Not surprisingly, in their 2 losses, the Panthers had their worst defensive showing against Big East foes. They allowed 370 yards per game to West Virginia and Cincinnati, but only permitted 278 yards per game in their 5 Big East wins.

Worst Defense: Connecticut -1.93
Part of the culprit for this low ranking is the unholy 711 yards they allowed to Cincinnati. Still, even without that monstrosity weighing them down, the Huskies would have been the worst defense in the Big East (but it would have been a little closer).

What's in Store for Next Year?
So now I want to take a closer look at Syracuse. As previously mentioned, the Orange boasted a significant statistical jump on defense. How likely are they to maintain and perhaps build on that performance? I have calculated SDPI for the seasons from 2005-2009, so I may be able to answer that question. The jump Syracuse experienced on defense in SDPI from 2008 to 2009 was over 2 standard deviations (2.02). They went from 7th (2nd to last) in the conference to 2nd. How often has this occurred in the Big East in the recent past? Probably more than you would think. 3 teams have seen their defensive SDPI jump at least 1.5 standard deviations from one season to the next. In fact, it seems to happen at least once a year. The table below lists those jumps, along with conference ranks in defense for each season. 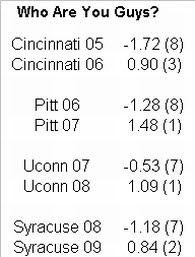 As you can see, the leap made by Syracuse was hardly unprecedented. Cincinnati and Pitt both made larger single season leaps in 2006 and 2007 respectively. Now the big question is, what happened in the season after the large improvements? And the answer in the table below is not exactly encouraging for Syracuse fans. 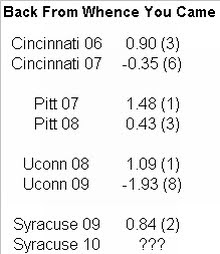 Cincinnati and Pitt experienced drops in performance of a little more than a single standard deviation, while Connecticut fell off the map. The Huskies boasted the league's number one defense in 2008 and the worst defense in 2009. One rudimentary way to guesstimate how Syracuse will do on defense in 2010 is to look at how many starters they will return and compare it to the number of starters these other defenses brought back. While looking at returning starters is inherently flawed, as defenses must deal with injuries and different personnel groupings over the course of a season, it can give us a reasonable place to start. Cincinnati returned 7 starters from their 2006 defense, Pitt returned only 5 from their 2007 defense, and Connecticut returned 6 from their 2008 defense. While we won't know until late in the summer how many starters Syracuse will return in 2010, only 2 of their top-12 tacklers were seniors. On the one hand, while this means the Orange will have a great deal of experience returning in 2010, looking at the other teams that improved significantly on defense in one season means the Orange were likely playing over their heads in 2009 and regression should be imminent. Still, if the offense can cut down on the turnovers, the Orange stand a very good chance of returning to postseason play for the first time since 2004. What about the other team in the New York/New Jersey area, the Scarlet Knights from Rutgers? While the Knights played in their 5th consecutive bowl (4th straight win), they were far from a dominant Big East outfit. In league play they were outscored by 2 points on the season and outgained by over 500 yards. The Knights were fantastic at winning the turnover battle, finishing +4 within the league and +20 overall. The Knights also scored 9 non-offensive touchdowns, which helped them to win games despite their offensive struggles. The Knights were breaking in a freshman quarterback in 2009, so the offense will likely be able to move out of the cellar, but on the whole the Knights enjoyed some good fortune that is unlikely to be repeated in 2010. With a non-conference slate that includes Norfolk State, Tulane, FIU, and Army, a 6th straight bowl bid is likely, but barring significant improvement, the Knights are not legitimate threats to win the conference. That designation likely belongs to the usual suspects--Cincinnati and Pitt. Butch Jones followed Brian Kelly at Central Michigan and won 2 MAC titles in 3 years there. He'll have an excellent quarterback in Zach Collaros (much like he had in Dan LeFevour at CMU) to keep the offense humming along. Pitt loses their starting quarterback, but they do return arguably the best running back in the league in super sophomore Dion Lewis. All the diminutive Lewis did as a freshman was rush for 1799 yards, closing the year with 8 straight 100-yard games. The biggest question mark in the Big East in 2010 for me will be Louisville. Steve Kragthorpe promptly took the Big East champion Cardinals and instead of wrapping the proverbial sports car around a tree at 100 mph, he simply neglected to change the oil and decided to fill the engine with 83 octane gas. The chart below shows Louisville's SDPI for the past 5 seasons. 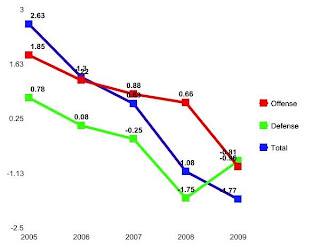 The first 2 were Bobby Petrino's doing, and the final 3 were the woeful Steve Kragthorpe era. Winning at Louisville is certainly not unprecedented, but Charlie Strong will have some house to clean in his first season.
Posted by matt at 4:01 PM

"looking at the other teams that improved significantly on defense in one season means the Orange were likely playing over their heads in 2009 and regression should be imminent."

So the Syracuse's new coaching staff with new schemes had nothing to do with the marked improvement?
Sure.

I'm sure the new coaching staff had something to do with the results sure. However, I also think its important to point out that the other 3 teams who were similar to Syracuse were unable to retain their defensive gains the next season.