Last season I took a look at how each of the 11 Division IA conferences had played out since 2005 (the last year of major realignment). We're gonna do the same thing this offseason with a few minor tweaks and also with a little commentary on the decade that was. So without further adieu, I present the our first installment: the ACC. 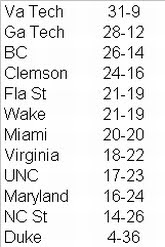 No real surprise at the top. Virginia Tech has won 2 ACC titles in the 5 seasons since the league split into 2 divisions, and has made 3 ACC Championship Game appearances. The 2nd place team may surprise a few folks. Georgia Tech has not had a losing season since division play began in the ACC, and the Jackets own the other 2 Coastal Division titles not captured by the Hokies. Boston College may also be a surprise to some folks at number 3, but they are the only ACC team besides Virgina Tech to not have a league record worse than 5-3 since 2005. 3 teams have yet to post a winning record in league play since 2005, and they all reside in the state of North Carolina (and neither of them is Wake Forest). Duke had their best season since division play began in 2009 when they posted a 3-5 record. North Carolina and NC State have both maxed out at 4 conference wins. 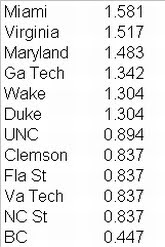 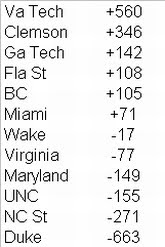 No surprise that the team with the best record (Virgina Tech) also has the best point differential by far. What is shocking is that Clemson is safely in 2nd place, with more than double the differential of 3rd place Georgia Tech. I think its safe to say Clemson has been a little unlucky in the close game department. Since 2005, the Tigers are only 6-12 in one-score games. If a few of those games had gone the other way, the Tigers could be looking at more than one Atlantic Division Championship. 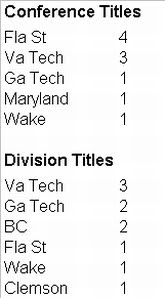 And finally, what was the biggest takeway from the 00 decade in the ACC?
It's pretty simple, the fall of the mighty Florida State dynasty. In the 1990's, Florida State went 62-2 against the rest of the ACC. They had conference win streaks of 29 and 18 in that span. If we add in the first half of this decade, when the Seminoles still went a solid 34-6, Florida State was 96-8 in their first 13 seasons in the ACC. They had only lost a single time at home, and had never lost more than twice in a single season. They had won 11 of 13 conference titles. Not a bad run. In the last half of this decade, as we've already pointed out, the Seminoles went 21-19. They lost more than twice as many games in less than half the time. In fact, in two separate two seasons spans, they lost as many or more games as they did in their first 13 years in the league. From 2005-2006, they lost 8 games, and from 2006-2007, they lost 9. However, perhaps more amazing is the fact that Florida State has lost 9 conference home games since 2005, after losing just once at home from 1992-2004. It's highly doubtful that Florida State can ever resume the dominance they enjoyed in the 1990's and early 2000's, but a change was likely needed at the top. A team with the resources of Florida State should not struggle to win more than half of its home league games.
Posted by matt at 3:17 PM