After a brief respite to recharge my batteries, your humble narrator has returned. This offseason will be a lot like the last few here at Statistically Speaking. Each conference will get the SDPI treatment (starting alphabetically with the BCS leagues), and we'll also do another multi-year review of each conference. So let's jump right in, shall we? We'll begin with a league very near and dear to my heart, the ACC. If you want a refresher on just what SDPI is trying to measure, here's the link to last year's article on the ACC.

To refresh your memory, here are the 2009 ACC standings.

Now here are the 2009 ACC SDPI standings. The standings are sorted by division by total SDPI with ranking for each category (out of 12 teams) in parentheses.

As you can see, there's not a great deal of disconnect between the actual standings and the SDPI standings. According to SDPI, the 2nd and 3rd best teams in the conference faced off in the title game with the 2nd best team walking away with the Orange Bowl bid. SDPI sees Virginia Tech as the best team in the conference, but the Hokies had to play at Georgia Tech, where they lost a close game in what eventually decided the Coastal Division race. The Coastal Divsion was far stronger than the Atlantic with Virginia Tech, Georgia Tech, and Miami all rating out as one standard deviation above average, while Clemson was the lone team from the Atlantic to rate as one standard deviation better than average. The 2 teams the numbers and the actual standings disagree on are Boston College and Wake Forest. The Eagles won 4 of their 5 conference games by a combined 16 points, and each of their 3 league losses came by at least 18 points. Over their 8 league games, Boston College was outscored by 22 points, indicating their record was a little inflated. Meanwhile, Wake Forest boasted perhaps their best offense in school history behind senior quarterback Riley Skinner. However, the Deacons defense had equal trouble stopping opponents and Wake Forest lost 3 league games by a combined 7 points (including 2 in OT) resulting in their first losing season since 2005.

Best Offense: Florida State 1.23
The Seminoles were the lone ACC team with an offense greater than one standard deviation above average. Florida State gained over 400 yards in 7 of their 8 conference games, missing that mark only once; against Clemson. As we'll see in a moment, that offense had to be good.

Worst Offense: Virginia -1.93
The Cavs offense was nearly one whole standard deviation worse than the 2nd worst offense (Boston College). The Cavs never gained more than 298 yards in ACC play, and during a 4-game stretch from mid-October to early-November, the Cavs averaged 186 yards per game. All the more bizarre, is that immediately before that span of suckitude, the Cavs hammered Indiana to the tune of 536 yards and 47 points in an easy 40-point win.

Worst Defense: Florida State -1.63
The Seminoles gave back all the strides they made on offense by posting perhaps their worst defense in the Bobby Bowden era. Florida State gave up yards in bunches to anyone and everyone. Add to that the fact that the ACC was not an extremely offensive league, and you have the resume of perhaps the worst BCS-conference defense this side of Washington State.

What's in Store for Next Year?
Atlantic Division:
Florida State and Clemson should be your prohibitive favorites heading into the fall of 2010. The Seminoles bring back a ton of talent from the league's best offense with the lone major loss being leading receiver Rod Owens. While Owens did lead the team in catches and yards, he only hauled in 61 balls for 729 yards, indicating Christian Ponder did a great job of spreading the ball around. New head coach Jimbo Fisher proved he could bring the offense back around, now if he can just do something to being the defense back to 'average' Florida State could go back to being a force in the ACC. Fresh off their first Atlantic Division title, Clemson loses 3 of its biggest playmakers on offense (running back CJ Spiller, receiver Jacoby Ford, and tight end Michael Palmer), but does bring back an experienced quarterback and 4/5ths of the starting offensive line. Plus, for the last half decade or so, Clemson has made their mark on defense. From 2006-2009, Clemson finished 2nd, 1st, 2nd, and 2nd in the ACC in defensive SDPI. They're like a poor man's Virginia Tech on that side of the ball. Whatever kinks they may have to work out on offense, Clemson should still be in contention for another division title in 2010. Elsewhere, this may finally be the year Boston College drops from the top of the Atlantic standings. As mentioned earlier, despite their 5 league wins (won at least 5 league games in all 5 years in the ACC), the Eagles were a shell of their former selves. Take a look at the graph below that shows the yearly SDPI of Boston College in the ACC. 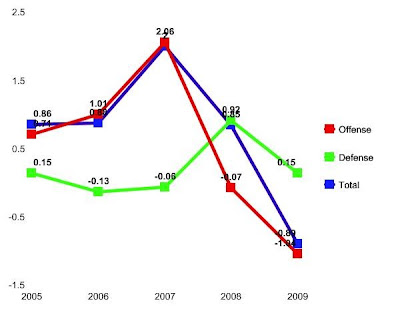 As you can see, the defense, with the exception of 2008 has maintained a performance level either a little above or below average. With Matt Ryan at the helm from 2005-2007, the offense steadily improved, peaking with a phenomenal year in 2007. However, since Ryan's matriculation, the offense has fallen off not one, but two separate cliffs. The Eagles were not a good football team last year, and barring substantial improvement, should see their record fall more in line with their unimpressive SDPI numbers. The other 3 teams in the division are very much a mystery. As mentioned earlier, Wake Forest boasted perhaps their best offense ever, or at least in the 'modern era' of college football. Unfortunately, that offense loses its trigger man, quarterback Riley Skinner and 4 starters along the offensive line. Wake was a little better than their 3-5 conference record last season, but getting back to a bowl game is not a sure thing. NC State was a huge disappointment last season, and the majority of the blame can once again be laid at the feet of the defense. In Tom O'Brien's 3 seasons as head coach, the Wolfpack have ranked last, last, and 2nd to last in defensive SDPI. I guess an optimist would say 2nd to last equates to marginal improvement. I would agree, and then ask them which Bush campaign they worked on (00 or 04). NC State has a very talented quarterback in Russell Wilson, who has 2 years of eligibility remaining. They would be wise not to waste those years forcing Wilson to win shootout after shootout in the hopes of going 6-6. And finally we have Maryland. The Terps hit rock bottom in 2009, winning only one conference game for the first time since 1998. One of the biggest mysteries, at least to me, is how Ralph Friedgen was able to win 31 games (including an ACC title) in his first 3 years at a program with just one winning season in the previous decade, yet only win 35 games in the next 6 years. Maryland was very young on offense last season, so despite the loss of a mediocre senior quarterback in Chris Turner, the Terps should return to mediocrity, and in this day and age in college football, that means a potential bowl bid.

Coastal Division:
This is where the action should be in 2010 with 4 teams having legitimate shots at the division crown. North Carolina's defense was legit last year, finishing 3rd in the conference in SDPI behind Virginia Tech and Clemson. Almost everyone returns in 2010, so if the offense can improve upon its rather dismal showing, the Tar Heels could take their first division crown. Paul Johnson has proven his triple option attack can succeed in a BCS conference. Unfortunately, the defense let the Yellow Jackets down at times last season. Things won't get any easier in 2010 with the exodus of 4 players with eligibility remaining. Safety Morgan Burnett, defensive end Derrick Morgan, running back Jonathan Dwyer, and receiver Demaryius Thomas will all likely be on NFL rosters in the fall. Thankfully, the Jackets do not have to replace the most important member of their triple option offense, quarterback Josh Nesbitt, who will be in Atlanta for one more season. Since effectively razing their team in 2007 (see the graph below), the Hurricanes have been improving and could finally grab their first division title in 2010. 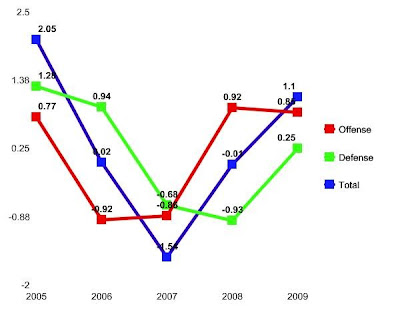 The program was on a steady downward course at the end of Larry Coker's reign, and in Randy Shannon's first year (2007) hit rock bottom. The U has improved on both sides of the ball in both seasons since and with a talented young quarterback (Jacory Harris), the pieces are in place for a run at the division title in 2010. Even with those 3 teams in the mix, its hard to bet against the 'old money' program in the new ACC. Virginia Tech has won the Coastal Division 3 times in the 5 years the ACC has had the division format. In the 2 seasons they did not advance to the ACC Championship Game, the Hokies finished just one game back of the eventual division winner. 2009 marked the first time since I have been calculating SDPI that Duke did not finish dead last in the conference. That's a testament to head coach David Cutcliffe. The big problem for Cut and the Blue Devils in 2010 is that they must break in a new quarterback to replace the departed Thaddeus Lewis who threw for 10,065 yards and 67 touchdowns in his 4 seasons in Durham. The other problem for Duke is they play in the Coastal Division and must face the aforementioned Four Horsemen of the ACC each and every season. Once again, Duke will be undermanned, and well coached as they journey the ACC. The only other ACC team besides Florida State that will be starting over with a new coach in 2010 is Virginia, who plucked Mike London from nearby Richmond. London guided the Spiders to 2 playoff appearances in 2 seasons as coach, including a run to the National Championship in 2008. London was previously the defensive coordinator here at Virginia, holding that title in the 2006 and 2007 season. In those seasons, Virginia ranked 4th and 3rd respectively in the ACC in defensive SDPI. In the 2 seasons, since the Cavs have ranked 7th both times in that category. London clearly is a solid if not excellent defensive mind, but so was Al Groh. If London is to be truly successful at Charlottesville, he will have to fix an offense that has not been better than average since Matt Schaub left after the 2003 season.
Posted by matt at 5:38 PM

オテモヤン said...
This comment has been removed by a blog administrator.
11:11 AM