First off, here are the combined Mountain West standings from 2005-2009. 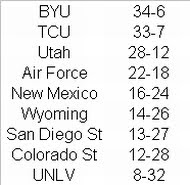 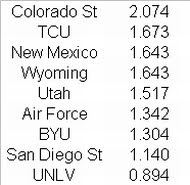 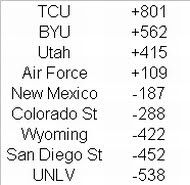 BYU owns the league's best record, but TCU has been the most dominant team in the Mountain West over the past 5 seasons. The main reason BYU has the better record is thanks to their sterling record in close games. Both BYU and TCU have played 11 one-score league games since 2005. TCU owns a decent 6-5 record in those games, but BYU is 9-2 in such contests, having not lost a close game to a conference foe since 2005. On the other end of the spectrum are the Rebels from UNLV. As noted earlier, UNLV has lost the most conference games of any Mountain West team since 2005 (32). Even worse, more than 70% of their losses (23) have been by double-digits.

And finally, what was the biggest takeway from the 00 decade in the Mountain West?
I would have to say its the rise, at least at the top, to almost a BCS-caliber league. Case in point, in the past 6 seasons, at least one Mountain West conference team has finished in the top-20 of the final BCS standings. On 3 separate occasions (2004, 2008, and 2009) the league has placed a team in the final BCS top-10. And twice more (2008 and 2009), the league has placed 2 teams in the final BCS top-15.
Posted by matt at 4:31 PM