We've exhausted our coverage of the big boys in our sojourn through the 2009 college football season. Now we move on to the mid-major leagues. We'll start with examining the WAC, home of the biggest household name outside of the BCS leagues--Boise State.

To refresh your memory, here are the 2009 WAC standings. 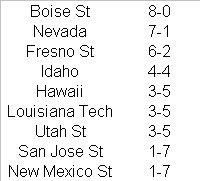 Now here are the 2009 WAC SDPI standings. The standings are sorted by total SDPI with ranking for each category (out of 9 teams) in parentheses. 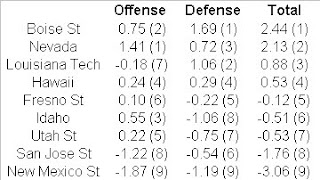 Not surprisingly, Boise State rates out as the best team in the WAC, followed closely by Nevada. These numbers probably overrate Nevada a bit because they dominated the lesser teams on their schedule to such a degree. Unlike Boise, Nevada was unable to hang with the better teams they faced outside the WAC, losing to Notre Dame, Missouri, and SMU by a combined 80 points. The teams with the biggest discrepancies between the actual and SDPI standings are Louisiana Tech and Hawaii. The Bulldogs and Warriors ranked 3rd and 4th respectively in SDPI, yet both had identical 3-5 conference records. For Louisiana Tech, the culprit was close losses. 3 of their 5 losses came by a combined 5 points. In addition, their 3 conference wins all came by at least 21 points with an average margin of just over 31 points per game. For Hawaii, the culprit was turnovers. In league play, the Warriors boasted a turnover margin of -9, which was second to last. These turnovers (21 in league play) severely hampered their offense. Despite the fact that they finished 4th in the conference in yards gained, they were 7th in points scored.

Best Offense: Nevada 1.41
Outside of their struggle (relatively speaking against Boise State), the Wolfpack curbstomped every other WAC team. They never gained fewer than 496 yards against another WAC foe and averaged over 573 yards in those other 7 games. They topped 600 yards in 3 of their 8 conference games.

Worst Offense: New Mexico St -1.87
The Aggies fielded perhaps the worst offense in all of Division IA. The Aggies peaked as an offense in their first game, when they rolled for 342 yards against Idaho. In their other 7 WAC games, they averaged 220 yards per game. And of course, who can forget their showing against Ohio State in Columbus, when they finished the game with 62 yards of total offense.

Best Defense: Boise State 1.69
As always, the Broncos do it with defense. Of course, that's not to say the Broncos were flawless on this end. Fresno State and Idaho both topped 500 yards against Boise. Fresno via the ground game (320 yards) and Idaho through the air (305 yards). In their other 6 conference games, Boise allowed their WAC foes an average of only 286 yards per game.

Worst Defense: New Mexico St -1.19
The Aggies pulled double duty at the bottom of the WAC. Their defense was not quite as bad as their offense (Idaho was was very close to them in terms of defensive ineptitude, while no one was close in terms of offensive performance), but that's damning with faint praise.

What's in Store for Next Year?
The race for first place in the WAC probably won't be very exciting. With a plethora of returning starters, Boise State looks poised to continue their dominance of the WAC. However, the race for second may end being quite contentious. Reigning silver medalist Nevada, returns 9 starters from the league's best offense and looks to continue Pistol-whipping their WAC foes. The biggest challenger to Nevada may end up being Louisiana Tech. The Bulldogs featured the second best defense in the WAC last season, but in 2010 they may unveil the league's most improved offense. Not only did they acquire Sonny Dykes, who helped run the spread at Texas Tech and who revived a dormant offense at Arizona, to replace Derek Dooley as head coach, but they also pried noted spread aficionado Tony Franklin from Middle Tennessee State where he helped drastically improve the Blue Raider offense in just one season. Louisiana Tech was also better than their record would indicate last season, so look no further than Ruston, Louisiana for your 2010 WAC sleeper. Another school that could challenge Nevada is Hawaii. The Warriors were also better than their poor conference record last season and with quarterback Bryant Moniz gaining valuable experience last season, the offense should be able to put more points on the board in 2010. Fresno State has long had the reputation of an elite WAC team, but the Bulldogs only have the 4th best WAC record since 2005 (stay tuned for more on this next week). The bad news for Fresno is they lose 3 of their top-4 receivers as well as running back Ryan Matthews who led the nation in rushing yards per game and decided to forgo his senior season to enter the NFL draft. Like Fresno, another team likely to take a step back in 2010 is Idaho. The Vandals were one of the best stories of the 2009 college football season, racking up 8 wins after winning just 9 in the previous 4 seasons. Still, the Vandals were a little lucky, going 5-1 in one-score games, and they still bested only New Mexico State in terms of defensive acumen in WAC play. And speaking of the Vandals, if there is one team poised to make an Idaho-like jump from obscurity to the postseason, its Utah State. The Aggies had a very tough non-conference schedule last season, losing to Utah, BYU, and Texas A&M all on the road. Within the league, they rated out as the 7th best team, but were within shouting distance of 2 teams that qualified for bowl games (Idaho and Fresno State). 2010 will mark the senior campaign for one of the best unknown quarterbacks in the nation, Diondre Borel of Utah State. Borel threw 17 touchdown passes against just 4 interceptions last season, and could end up being the best quarterback in the league outside of Kellen Moore (Boise State) and Colin Kaepernick (Nevada) this season. The rear of the WAC should be brought up by San Jose State and New Mexico State. The Spartans are replacing Dick Tomey who did pretty good things in his 5 years at the school. Tomey took the Spartans to one bowl, and had them bowl eligible in another season. Unfortunately, he could never quite get the offense going, and its doesn't appear new coach Mike MacIntyre (former Duke defensive coordinator) will be able to do any better in his first season. DeWayne Walker had a pretty miserable first season as head coach of New Mexico State. Year 2 will likely be a little better, but the Aggies should still be one of the WAC's worst teams on both sides of the ball.
Posted by matt at 3:11 PM