As any regular reader of this blog will note (thanks Dad), SDPI is a mainstay of the offseason posts. What is SDPI you ask? SDPI is simply a measure of how a given team performed gaining and preventing opponents from gaining yardage versus the conference average. For my SDPI ratings I only look at conference games. I do this primarily because non-conference games vary greatly in strength among teams. In addition, conference games usually come after a team has played a few non-conference games and has had an opportunity to iron out the kinks and show themselves for what they really are. The SDPI numbers are also key components of my projection system. With that in mind, I decided to take a midseason look at how the SDPI numbers are stacking up for each conference. Since a good number of ACC and SEC teams have played half of their conference schedule already, we'll begin with those two conferences. Next week, we'll take a look at the Big 10 and Big 12 and perhaps the Pac-10. The following week, we'll examine which WAC team has the best shot at knocking off Boise and preview what should be a monumental showdown in the Mountain West (TCU at Utah). Sometime either that week or later, we'll also take a peak at the Big East, MAC, and Conference USA. The numbers, at least for some teams will shock and amaze you.

ACC Guess Who's Back?
The Florida State Seminoles appear to be back to their 90's form under Jimbo Fisher. They are 4-0 in the conference for the first time since 2003 and are in prime position to win the division title for only the second time since the league expanded to 12 teams in 2005.
Here are the ACC standings through Saturday's games. 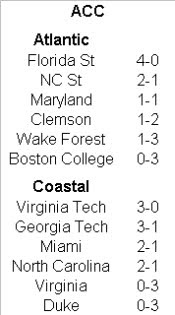 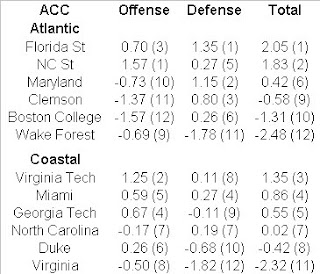 Boston College-The Eagles have a terrible offense. There's no sugar coating it. However, they remain a team to watch in the second half thanks to their defense. Despite facing the top-3 offenses in the league (NC State, Virginia Tech, and Florida State) in their first 3 games, the Eagles still rate out as above average defensively.
Clemson-Speaking of terrible offenses, think Clemson misses CJ Spiller? The defense, as always, remains good.
Duke-Cutcliffe continues to produce an above-average offense at Duke, but the defense is nowhere to be found.
Florida State-What a difference a year and a new defensive coordinator make. After finishing dead last in the conference in defense last season under outgoing coordinator Mickey Andrews, the Seminoles are tops in the conference under Mark Stoops.
Georgia Tech-Al Groh has not yet had the desired effect on the defense.
Maryland-Maryland is the only ACC team to have played only two conference games. Take their numbers with a grain of salt. Interestingly, they were significantly outgained by Duke in a close home win and significantly outgained Clemson in a blowout road loss. We should know a lot more about this team after they visit Boston College on Saturday.
Miami-Not quite as dominant as the pundits had hoped. Still, the 'Canes get division pole-sitter Virginia Tech at home
North Carolina-A nice 2-1 league start, particularly with all the suspensions and distractions, but those number do not portend contention.
NC State-The best offense in the league. If not for special teams and turnover struggles against Virginia Tech, next Thursday's game against Florida State would have been for sole possession of first place.
Virginia-Somehow a worse defense than Wake Forest (if that's even possible).
Virginia Tech-The offense has been a pleasant surprise, but the defense is surprisingly low (8th in the conference).
Wake Forest-Based on the eye test, this is the worst defense in the conference. Awful tackling and pass defense are a good recipe for missing out on a bowl.


SEC The Smoldering Ruins of the SEC East
SEC East teams have won just a pair of games in 12 tries against their conference opponents out west. South Carolina famously upset Alabama ten days ago, and Vanderbilt knocked off Ole Miss (on the road no less) in the season's third week. Resident division overlord Florida is already winless against the SEC West, and will not get a chance to break their streak unless they manage to win this battle of attrition and get to the SEC Championship Game.
Here are the SEC standings through Saturday's games. 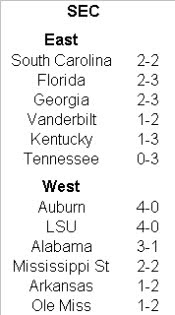 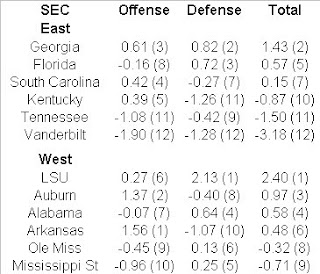 Alabama-The offense rates surprisingly low considering nearly everyone, including the reigning Heisman winner, returned in 2010.
Arkansas-The offense is once again the team's strength, but the defense is only marginally improved from their 12th place showing last year.
Auburn-The Battering Cam leads another great SEC offense, but one would think their defense will let them down before its over.
Florida-The offense has never been below average in Urban Meyer's tenure, but perhaps the losses of coordinator Dan Mullen following the 2008 season and Tebow this past season have brought about a perfect storm in Gainesville.
Georgia-Definitely the most shocking numbers SDPI spit out. However, the Dogs have dominated their last 2 opponents, and their losses to Arkansas and Mississippi State were close. If they can win the Cocktain Party, their division hopes are very much alive.
Kentucky-Terrible as always on defense, but the offense is enjoying its best showing since Andre Woodson was under center.
LSU-Clock management and rotating quarterbacks be damned, this defense is scary good. As far as I am concerned they are the division and by extension the conference favorite.
Mississippi State-Not quite as good as you might think. In fact, the offense has taken a step back from last season. However, barring a major upset by UAB, the Bulldogs will be bowl eligible come Saturday night. Kudos to Dan Mullen.
Ole Miss-An average team that will probably be kicking themselves for losing to Jacksonville State, as that loss will probably keep them out of the postseason.
South Carolina-Maybe Ellis Johnson should return some of that massive salary. When a defensive coordinator makes more than most mid-major head coaches, the defense should be elite, not below average. Still, if they take care of business against Vandy and Tennessee, the battle in Gainesville will be for their first division title. The Arkansas game won't matter in essence because it is not a division game, and Florida already has 3 losses.
Tennessee-They don't do anything particularly well, but thankfully Memphis and Vanderbilt are still on the schedule.
Vanderbilt-Since I live in Columbia, I peruse the local news affiliate websites. There is a ridiculous article on one today about how Vandy controls its own destiny in the SEC East race, and with a win versus South Carolina Saturday would be alone in first place. While certainly factually true, it fails to mention how awful Vanderbilt is. Despite already owning a league win, this year's team may actually be worse than last year's (winless in the conference) on a down-to-down basis. I'd take the bet that the Commodores don't win another SEC game this season.
Posted by matt at 3:31 PM

Your SDPI rankings, I assume that these numbers are standard deviations? LSU is 2.13 std. deviations better than the mean. Just making sure that's right.

You are correct sir.