As promised last week, here are the mid-season SDPI ratings for teams in the Big 10, Big 12, and Pac-10. Before we get to the ratings though, how did the ACC and SEC ratings perform this past week? Well, the ratings nailed Georgia, which won handily at Kentucky. However, the 'elite' defense that I proclaimed LSU possessed was turned to rubble against Auburn. Still, on the whole, the SDPI ratings did pretty well, posting a 7-2 mark both straight up and against the spread (the losses were LSU over Auburn and Georgia Tech over Clemson). I'll keep you posted on how the ratings perform this week. Next week, we'll finally have a large enough sample to handicap the final BCS conference, the Big East. In addition, look for the Mountain West ratings, where we'll handicap the potential top-10 matchup between TCU and Utah. TCU has what should be an easy win on the road against UNLV, while the Utes have a much tougher road game at Air Force. I'll also try to crunch the Conference USA and WAC numbers next week too.

Big 10 Shutout of the BCS Title Game?
That scenario is a real possibility heading into the last month of the regular season. Michigan State must not only win out (very conceivable), but they must also hope either Oregon or Auburn falters down the stretch. Even if both lose, that may not be enough, as TCU, Boise, or Utah are likely to finish the year unbeaten as well. And what about a potential one-loss Alabama or LSU? If the Spartans can win in Iowa City this week, we could be in for some mega-BCS chaos in early December.
Here are the Big 10 standings through Saturday's games. 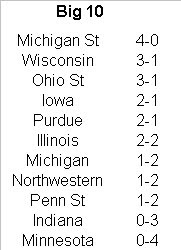 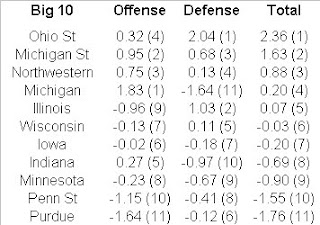 Illinois-Vic Koenning has done wonders for that Illini defense, as they have improved from 9th to 2nd in just one season. Koenning also consistently coordinated stellar defenses at Clemson, and improved Kansas State's defensive acumen in his only season there.
Indiana-The Hoosiers need to somehow steal two conference games to get to a bowl. I say steal because they will likely be an underdog in all 5, and with Minnesota not on the schedule, the Big 10 could have a pair of winless conference teams.
Iowa-Surprisingly, the defense is not as stout as it has been the past two seasons.
Michigan-The best offense and the worst defense in the conference.
Michigan State-Extremely well-balanced on both sides of the ball. Don't be surprised if they walk out of Iowa City with their undefeated record in tow.
Minnesota-Like Indiana, will likely be an underdog in the rest of their games.
Northwestern-The numbers love the Wildcats. Should be a team to watch in the second half.
Ohio State-The Terrelle Pryor for Heisman hype has dissipated, but the defense is still nasty as ever.
Penn State-Joe Pa's charges continue to struggle, but they got their must-needed first conference win at Minnesota.
Purdue-Probably not the league's worst team, but Ohio State so thoroughly dominated them that their overall numbers have plummeted.
Wisconsin-Like Iowa, another team that does not appear to be as strong as their record would indicate.


Big 12 Baylor?!
Yes Baylor. The Bears are currently in first place in the Big 12 South and also rate out as the best team in the conference thanks to a ridiculous offense that is currently averaging, yes averaging, over 600 yards per game in league play. They currently average over 120 more yards per game than the second best offense (Texas A&M). Perhaps not coincidentally, the Bears are also bowl eligible for the first time since 1994, and have a chance to finish .500 or better in Big 12 play for the first time ever!
Here are the Big 12 standings through Saturday's games. 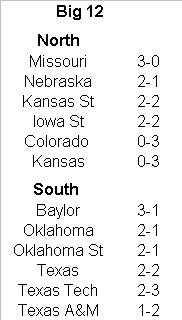 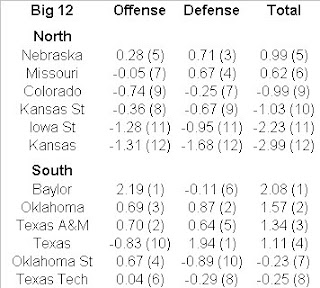 Baylor-The Bears have moved the ball against everyone they have played...except TCU. The Horned Frogs held the prolific Baylor offense to 10 points and 263 total yards in their 45-10 win.
Colorado-The 3-1 start is a distant memory, and Oklahoma is up next this week. However, the Buffs still have Iowa State, Kansas, and Kansas State remaining on the schedule, so a bowl game is still a possibility.
Iowa State-How do they do it? Despite ranking second to last in both offense and defense, the Cyclones are still very much alive in the bowl picture, and technically in the division race as well.
Kansas-The biggest offseason question may be, 'How the hell did they beat Georgia Tech?'
Kansas State-Probably not that good as their two league wins have come against Iowa State (11th) and Kansas (12th).
Missouri-I'm not buying them as national players yet, but if they can beat Nebraska in Lincoln they can certainly run the table in the regular season.
Nebraska-The offense was humbled by Texas, and the defense was humbled by Oklahoma State.
Oklahoma-Probably the most complete team in the conference, but they blew their chance for a national title at Missouri.
Oklahoma State-Back to the way Mike Gundy likes it. A very good offense, and a very bad defense.
Texas-They remind me of LSU sans the clock management debacles, as a great defense is wasted by an inept offense. An interesting clash of strengths this week against Baylor.
Texas A&M-The numbers seem to think the Aggies are poised for a second half run, but I don't know that I trust Mike Sherman.
Texas Tech-Tuberville comes to town and screws up both the offense and the defense. Two more league losses and the Red Raiders will have their first losing conference campaign since 2000.


Pac-10 Look Who's Back!
Yes, the numbers say the Trojans are still the cream of the crop out west. They will have a chance to prove it Saturday night against the only league member with a shot to bring home the national title, Oregon.
Here are the Pac-10 standings through Saturday's games. 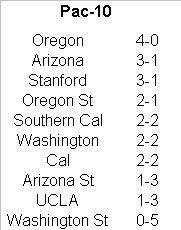 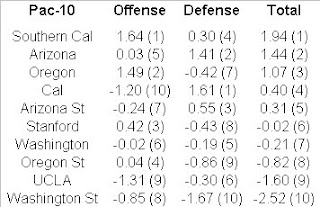 Arizona-The Wildcats are flying under the radar, but at worst will quietly play in their 3rd straight bowl game.
Arizona State-The numbers are a fan, but the Sun Devils likely need a little luck just to get to 6-6.
Cal-The Bears have the league's best defense? Yes. Despite getting eviscerated by Southern Cal (602 yards and 48 points), the Bears have held their other 3 conference foes to 34 total points and 689 total yards.
Oregon-Like their fellow pole-sitters down south (Auburn), the defense is the weak link. It pays to mention, the Ducks were significantly outgained at Arizona State (over 200 yards), but 7 forced turnovers got them the win.
Oregon State-The Beavers are ranked surprisingly low. Boise and TCU certainly hope those numbers don't portend a fall.
Southern Cal-Playing at home, I think the Trojans are a good bet to ensure number one goes down for a 4th consecutive week.
Stanford-Every Pac-10 team besides UCLA has moved the ball against them.
UCLA-At the beginning of October, the future seemed bright. Now the Bruins are just another team that has a hard time moving the ball.
Washington-They don't do anything particularly well, but have an outside shot to go bowling for the first time in 8 years.
Washington State-Believe it or not, they have improved. After being saddled with the worst offense and defense in both 2008 and 2009, the Cougars are merely 50% in the worst of category.
Posted by matt at 3:05 PM