The Big 12: A Compendium

As you may have heard, the 2010 football season marked the end of an era in college football. Beginning with the 2011 season, the Big 12 will have two fewer members, as original Big 8 member Nebraska, and longtime conference rival Colorado move on to the Big 10 and Pac-10 respectively. The Big 12 will continue to exist, at least for a time, as a smaller 10-team conference sans divisions. With that being the case, i thought it would be interesting to look back on the Big 12 as it existed for a decade and a half and provide you with some interesting statistical tidbits and minutiae. Enjoy.

Your League Overlord Is...
Well, its debatable. Oklahoma has the most Big 12 Championships with 7. The other 12 teams in the conference only have 8 combined titles, with Texas and Nebraska being the only other teams with multiple titles (3 and 2 respectively). Oklahoma also has the most division titles with 8. Again Nebraska and Texas are second and third in this respective category with their roles reversed. Nebraska has 6 division titles and Texas has 5. However, despite their dominance, particularly since Bob Stoops arrived in Norman before the 1999 season, the Sooners do not own the league's best conference record. 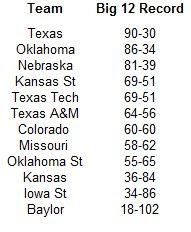 That distinction belongs to Texas. Oklahoma does own the best record in the conference since 1999, edging out Texas 78-18 to 76-20. The best team to never appear in the Big 12 Championship game is obviously Texas Tech. The Red Raiders are tied with Kansas State for the 4th best record since the inception of the conference, but thanks to their placement in the South division with Texas and Oklahoma, they were never able to win the division (though they did tie for the crown in 2008). The Red Raiders are also tied with Texas for the fewest losing seasons in conference play with 2, and they are also the only Big 12 team to be bowl eligible in each season of the Big 12's existence. 11 of the league's 12 teams have at least tied for their respective division crowns, with the lone exception of course, being Baylor. In fact this past season, the Bears posted their first-ever non-losing season in Big 12 play when they went 4-4. However, before we start dumping on the Bears and their lack of success, it also bears (nice eh?) mentioning that Kansas and Iowa State have had only one winning season in conference play apiece. Kansas, as you may recall, went 7-1 in 2007 on their way to the Orange Bowl, while Iowa State managed a 5-3 mark back in the year 2000.

Protecting This House
Which Big 12 team has been the best at defending its home turf? The answer, will not shock you. 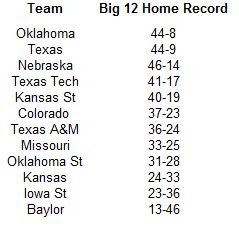 Oklahoma narrowly edges Texas as the best home team in the Big 12's existence. Oklahoma moved into the top spot after the Longhorns went winless at home in the Big 12 in 2010. After losing in Austin just 3 times during Mack Brown's first 12 years in the lone star state, the Longhorns amazingly lost all 4 of their Big 12 home games this past season. Meanwhile, Oklahoma has lost just once in Norman to a Big 12 foe under Bob Stoops (it came in 2001 to Bedlam rival Oklahoma State). You'll notice Oklahoma and Texas have significantly fewer home games than the other 10 Big 12 teams. This is because they each forfeit a home game every other year in order to play each other at the state fair in Dallas.

Road Warriors
And who has performed the best in the road? Again, the answer is not likely to surprise you. 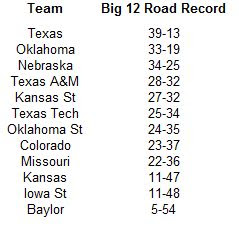 Texas and Oklahoma are once again tops in the conference, this time in true road record. These games comprise only 'true' road games, so any neutral site game (including every Oklahoma/Texas Red River battle) is not considered. Nebraska joins the Longhorns and Sooners as the only other Big 12 team with a winning record in road games. Baylor has been by far the worst road team in Big 12 play. In fact, they did not win their first Big 12 road game until 2005, the 10th year of the league's existence. 2010, as mentioned earlier, not only marked Baylor's first .500 or better season in the Big 12, but it also marked the first time they managed more than a single road win. The Bears defeated both Colorado and Texas on the road in 2010. The victory over Colorado means the Buffs are currently the only team to ever lose multiple times to Baylor at home in Big 12 play (Baylor also beat them in 2006).

The Biggest Homefield Advantage Is In...Lubbock?!
That's right. Texas Tech has the largest discrepancy between their record at home and their record in 'true' road games. The Red Raiders win over 70% of the time in Lubbock, but see their winning percentage drop to just over 42% on the road. 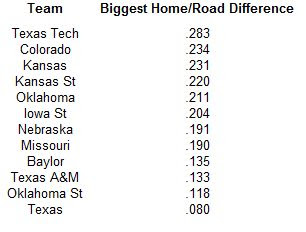 Colorado also enjoys a significant homefield advantage (compared to their road performance) playing in Boulder. Texas has shown the smallest difference between their home and road record, meaning they are just as tough to beat on the road as they are in Austin (usually).
Posted by matt at 11:31 AM

Have you considered a scatter plot of home vs away records as a way to visualize home-field advantage? That might tell more of the Texas story -- their home-away difference is small, but both home and away, their win percentage is high. Just a thought.

Not a bad idea. I'll file that away for a potential post later in the offseason.