If you spent any time this bowl season watching ESPN after New Year's Day, you no doubt heard the talking heads going on and on about how 'awful' the Big 10 was. They loved to site and ridicule in particular the league's 0-5 mark on January 1st. However, what they failed to mention was that all 5 Big 10 teams were underdogs in those games, with Northwestern (9 and a half point dogs to Texas Tech) and Michigan State (10 point dogs to Alabama) coming in as prohibitive underdogs. In order to come up with a more sophisticated way to look at how a conference (or team) performs in the bowl season, it would help to know the probability they had of winning their bowl game. One way to estimate win probability is to use the point spread or Vegas line. While the point spread is to some degree influenced by public opinion (in the form of line shifts), it is for the most part an unbiased rating system. In order to determine how likely a team with a given point spread was to win a particular game, I looked at all games played between IA teams from 2005-2009 where there was a point spread of at least one point (i.e. the game was not a pick em' or had a half point favorite) and determined who won the actual game (covering the spread was not important in this exercise). I then (somewhat) arbitrarily divided the results into difference ranges. They are listed in the table below. 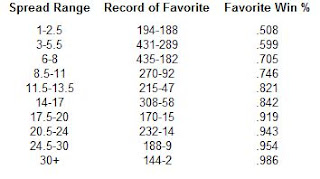 For the most part, the numbers are pretty intuitive. When a team is favored by less than a field goal, the game result is usually a coin flip, with the favorite prevailing just over 50% of the time. When the margin increases to at least a field goal, but less than a touchdown, the favorite wins nearly 60% of the time. You can peruse the rest of the table for yourself, and see if you can guess the 2 teams that lost as favorites of 30 points or more (the answer is at the bottom of this post). I'll give you a hint, they both happened in 2007 and occurred within 2 weeks of each other. 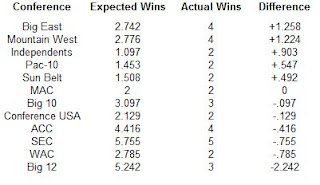