We have but two more leagues to review in our jaunt through the college football landscape. We begin the end of our SDPI reviews with a look at the MAC, a league even the NFL envies with its commitment to parity. More on this later. If you want a primer on what's going on here, follow the link to last year's MAC post. 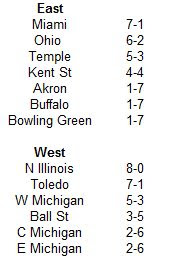 Now here are the 2010 MAC SDPI standings. The standings are sorted by division by total SDPI with ranking for each category (out of 13 teams) in parentheses. 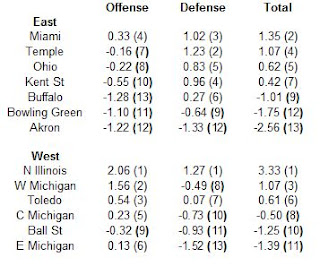 The MAC almost had a team finish the year ranked for the second consecutive season. Heading into the MAC Championship Game, Northern Illinois was ranked 24th in the AP Poll. However, their upset loss to Miami dropped them out of the poll. Still, the MAC enjoyed a solid season, with its top two teams (Miami and Northern Illinois) winning bowl games in relatively easy fashion. Northern Illinois' win over Fresno was especially satisfying as the Bulldogs (deservedly or not) are one of the more revered mid-major teams.

So Who Was Better Than Their Record Showed?
Pick your directional Michigan school. Both Central Michigan (won three of the previous four MAC titles) and Western Michigan were much better than their records showed. Central Michigan was undone by turnovers (committed a league-high 25 in MAC play for league-worse margin of -13) and an inability to win close games. Their 1-5 record in one-score games (1-3 in the MAC) relegated them to their first losing season since 2004. Meanwhile, Western Michigan rated out as the third best team in the league statistically. They too struggled in close games (0-2 overall and in the league), but won several blowouts (four of their five league wins came by at least 29 points), suggesting that they were capable of much more than a third place finish in the division.

So Who Was Worse Than Their Record Showed?
The Toledo Rockets enjoyed their first winning season since 2005, but a great deal of their success is likely unsustainable, unless they improve their overall play. Toledo forced a league-high 27 turnovers in MAC play and turned the ball over just nine times for an absurd margin of +18 in eight games (for comparison's sake, they forced 10 and lost 23 in 2009). That number will likely trend the other way in 2011. Make no mistake, the Rockets were in the upper-half of the MAC statistically last year. However, their play was not indicative of a team that lost just a single conference game.

Best Offense: Northern Illinois 2.06
The Huskies never failed to generate at least 420 yards of offense or 28 points in any league game until they were held to 373 and 21 respectively in their MAC Championship Game defeat.

Worst Offense: Buffalo -1.28
New coach. New quarterback. Yuck. After rolling for 441 yards against Bowling Green in their conference opener, the Bulls averaged just 241 yards per game over their last seven. For the season, their leading rusher gained just 298 yards and averaged under 3 yards per carry.

Best Defense: Northern Illinois 1.27
Western Michigan was the only MAC team to top 400 yards against the Huskies, until Miami put 432 on them in the MAC Championship Game.

Worst Defense: Eastern Michigan -1.52
The Eagles somehow held Ball State and Buffalo in check (540 combined yards), but were utterly hopeless against everyone else (allowed 480 yards per game).

The MAC is the NFL of College Football
I know what you're thinking: How can the MAC, one of, if not the weakest of the IA conferences possibly be compared to the best of the best in the National Football league? The answer is simple - parity. The NFL prides itself on the notion that even woebegone teams and franchises are just a year or two away from contention. The MAC may not tout its parity like the NFL, but rest assured it does exist. Before we delve into the hard numbers, consider these few facts. Over the past three seasons, Buffalo has won the MAC, and finished 1-7 in the conference just two years later. Ball State and Central Michigan have both finished unbeaten in MAC play, then 2-6 the very next year. Bowling Green has finished with six league wins one season and then two the next. Miami went from the basement of the East division (1-7) to the top of the East (7-1) in just one season. I could go on, but suffice it to say parity is alive and well in the MAC. How much parity is there in the MAC and how does this parity compare to the other ten IA conferences? To answer that question I did a simple regression analysis to determine how well a team's conference wins in one season predict their conference wins in the following season. I looked at three years worth of data (2008-2010). That is, how well did a team's 2008 conference record predict their 2009 conference record and how well did their 2009 conference record predict their 2010 conference record. The R squared values for each conference are included in the chart below. 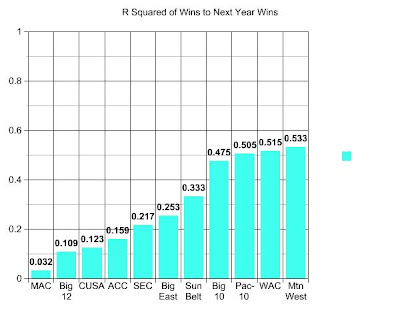 I didn't know that MAC was a league that it was quite competitive. I have to check some of their games.