This week, our conference recap takes us to the WAC, a league that may soon cease to exist in football. Boise State will be joining the more prestigious Mountain West in 2011, with Fresno State, Hawaii, and Nevada following suit in 2012. Oh well, for at least one more season, the WAC is alive and well. For a primer on what this series is about, here's the link to last year's WAC post. 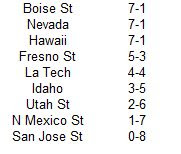 Now here are the 2010 WAC SDPI standings. The standings are sorted by total SDPI with ranking for each category (out of 9 teams) in parentheses. 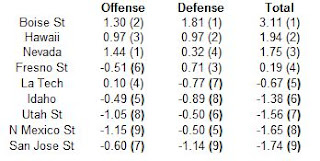 The actual standings and SDPI ratings agree there was a triumvirate at the top of the WAC in 2010. Boise continued their dominance in their swan song, but Hawaii and Nevada also rose up and enjoyed solid seasons. The WAC nearly placed two teams in the top-10 of the final AP poll for the first time in its history with Boise finishing the season ranked 9th and Nevada 11th. When the Wolfpack upset the Broncos in exciting fashion on November 26th, it marked the end of Boise's 22-game WAC winning streak and 35-game regular season winning streak. On the other end of the spectrum, San Jose State failed to win a league game, and dating back to their slide to end the 2008 season, the Spartans are now 1-18 in their last 19 conference games.

So Who Was Better Than Their Record Showed?
The WAC standings line up nearly identically with the SDPI ratings. However, Boise is probably the team that is most underrated by their standing in the conference. While the Broncos tied for the league title, they thoroughly dominated their league opponents, with the exception of a second-half meltdown in Reno. The Broncos won each of their other league games by at least 29 points, and eviscerated fellow co-champ Hawaii by 35 points. For comparison's sake, the Broncos posted a combined SDPI of 2.44 in 2009. The second rated team, Nevada, posted a combined of SDPI of 2.13 for an advantage of 0.31 standard deviations. If you don't want to go back and look at the table, Boise posted a combined SDPI of 3.11 last year. Hawaii was second at 1.94, 1.17 standard deviations below Boise. Misfortune in the kicking game was the only thing keeping this team from a third consecutive perfect conference mark.

So Who Was Worse Than Their Record Showed?
Once again, we're splitting hairs here as the WAC teams that were good in 2010 posted good records and vice-versa. However, Idaho managed to win three league games despite not being appreciably better than the three teams that finished below them in the standings. Idaho followed up their surprising 8-5 2009 season with a somewhat disappointing 6-7 mark. However, outside of 2009, the six wins represent their most in a season since 1999 when they went 7-4. The Vandals were not particularly lucky in 2010, they just weren't a great deal better than Utah State, New Mexico State, or San Jose State, which combined won as many games in conference as Idaho.

Best Offense: Nevada 1.44
The Pistol was a 357 in 2010. The Wolfpack continued their dominance (finished first in the category in 2009) with Colin Kaepernick under center (or just behind center as it were) in his senior season. Outside of their struggle on the islands (season-low 293 yards), the Wolfpack averaged 577 yards in their other seven conference games.

Worst Offense: New Mexico State -1.15
The Aggies topped 400 yards of offense just once on the year, in their lone league win versus San Jose State. They were held below 215 yards three times in league play.

Best Defense: Boise State 1.81
Nevada showed they were mortal when they racked up 528 yards in their upset win. However, in their other seven league games, the Broncos were nearly impenetrable, allowing just 230 yards per game.

Worst Defense: San Jose State -1.14
What's an easy way to go winless? Allow over 500 yards per game to your conference brethren. The Spartans were at their worst against Nevada and Hawaii, allowing them to gouge them for over 1200 yards in the two games.

Sacks in the WAC
Even casual fans by now know about Boise State. The Broncos, along with schools like TCU and Utah, have been the poster child for mid-major football the past few seasons. The Broncos routinely dominate their opponents in the WAC and also hold their own against the big boys from the BCS leagues. To satisfy my own curiosity, I wanted to find out how dominant Boise State was in regards to protecting their own quarterback and pressuring the opposing quarterback in the confines of WAC play. To answer that question, I wanted to look at more than just total sacks and sacks allowed (though Boise did lead the WAC in both categories with 30 sacks and just 6 sacks allowed). Instead I looked at sack rate. Sack rate is simply the number of sacks divided by the number of pass attempts plus sacks. This number tells us how many times out of 100 pass attempts a team sacked the opposing quarterback or was sacked by the opposing team. The table below lists the sacks rates (higher is better) for WAC teams in 2010 (conference play only). 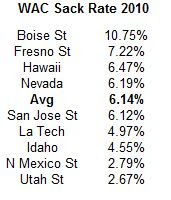 The average sack rate was 6.14%. Boise State sacked opposing WAC quarterbacks at a rate of more than once every ten pass attempts, while Utah State registered a sack roughly every 40 pass attempts. Just eyeballing sack rates, the ability to sack opposing quarterbacks seems to align itself pretty evenly with overall defensive ability. Most teams were ranked in sack rate very close to where they were ranked in defensive SDPI. The big exception is of course San Jose State, which finished dead last in the conference in defense, but was actually about average in sack rate. Unfortunately for the Spartans, when they didn't sack the opposing quarterback, their secondary broke down. WAC opponents averaged more than 8.5 yards per pass attempt. Now let's look at how often a team's quarterback was sacked by the opposition (lower is better). 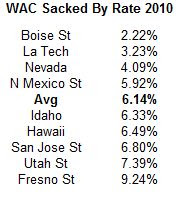 Once again Boise State is by far the cream of the crop. Opponents sacked Boise quarterback Kellen Moore just once every 45 drop backs. On the other end of the spectrum, Fresno State quarterback Ryan Colburn was sacked about once every 11 pass attempts. This helps explain why Fresno finished with a below average SDPI rating (6th in the WAC) despite Colburn's otherwise solid passing stats.
Posted by matt at 1:57 PM