Its been nearly 6 months since Auburn and Oregon squared off in the BCS National Championship Game, and I don't know about you, but I sure could use some amateur football. While we still have a ways to go (54 days to be exact), it is time to resume an annual tradition here at Statistically Speaking, the conference previews. We'll begin today with the ACC, and go alphabetically through the 6 BCS conferences before moving on to the Independents and the Mid-Majors. These projections come from my very own projection system, so feel free to disagree with them. If you want to see how wrong I was last year, here's the link to the 2010 ACC Projections. In addition to the projections, there is a small post regarding some statistical fact I found interesting about the ACC last year. All other league projections will feature a similar format. Check back in a few days for the Big East preview. And without further adieu, here's how the ACC will shake out in 2011. 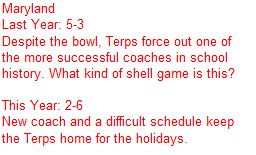 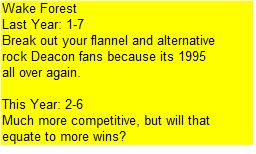 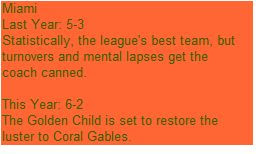 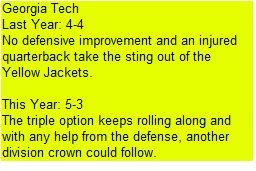 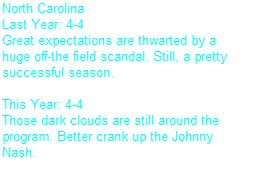 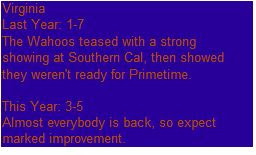 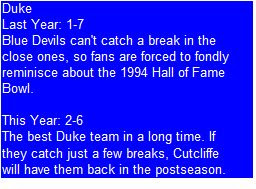 No Offense, None Taken
If you watched a lot of ACC football, or paid attention to the SDPI post way back in January, you know that Clemson and Boston College were among the most poorly balanced teams in the nation last season; at least in terms of offense and defense. Both teams boasted stellar offenses, with Clemson leading the ACC in defense and Boston College finishing second. However, both teams were at the opposite end of the spectrum when it came to moving the ball themselves. Clemson ranked tenth (out of twelve teams) in offense, and Boston College ranked eleventh. Thus, we can intuitively surmise that games involving Boston College and Clemson provided very few touchdowns. And we would be correct in our assumption. The table below lists the offensive touchdowns (touchdowns not scored by the defense or special teams) both scored and allowed by ACC teams in conference play in 2010. 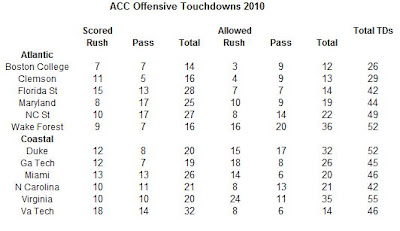 As you can see, Clemson and Boston College had by far the fewest touchdowns scored in their respective games. As a point of reference, the average ACC team saw 44 total touchdowns scored in their eight league games, for an average of 5.5 total touchdowns per game. Virginia games saw the most frequent scores, with the Cavs and their opponents combining to score nearly seven offensive touchdowns per game. Not that the Cavs were very good, as they allowed more than four per game on average, while scoring less than three per game themselves.

So the average ACC teams saw 44 touchdowns scored in their league games with a standard deviation of 8.73863 touchdowns (a little more than one per game). How far away from the average were Clemson and Boston College? Pretty far. Clemson was 1.72 standard deviations below average, while Boston College was 2.06 below average. The following table helps illustrate just how far away from the rest of the league Clemson and Boston College were when it came to scoring (either for or against) in their games. 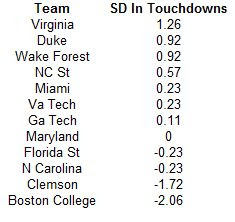