In the past two weeks, we have handicapped seven conference races. This week, we will examine the last four. This week's breakdown includes the Big East, a BCS conference that may be on its final legs and three non-BCS conferences of varying degrees of strength.

First off, here are the Big East standings.

And now the SDPI ratings.

Cincinnati: The Bearcats are the early leader in the Big East race, but that may not last long. They play SDPI darling Pittsburgh on the road Saturday.

Connecticut: The defending Big East champs have not been able to carry over their phenomenal close game luck from last season, going just 1-3 in one-score games thus far. They need to win 3 of their final 4 games to get back to a bowl.

Louisville: The Cardinals are flying under the radar now. Pardon the pun. Their defense has been the best in the Big East in the early going, and they get a chance to prove themselves this week as they take on the conference's best offense in West Virginia. Charlie Strong and defensive coordinator Vance Bedford have done a great job with the defense. The Cardinals have not allowed 30 points or 400 yards of total offense in 15 straight games. In 3 seasons under Steve Kragthorpe, the Cardinals surrendered at least 30 points 17 times and at least 400 yards 18 times (in 36 games).

Pittsburgh: The Panthers have been the league's strongest team in the early going, but unfortunately have done nothing to improve the league's standing nationally in losing to Iowa, Notre Dame, and Utah in non-conference action.

Rutgers: Receiver Mohamed Sanu ranks 5th nationally with 70 catches on the season. However, he is averaging only 10.44 yards per reception. Only 3 receivers with at least 50 catches have a lower per-reception average.

South Florida: It's ironic that the only Big East team to do anything of note in the non-conference is sitting in the league basement. Since joining the Big East in 2005, the Bulls have never finished better than 4-3 in the league.

Syracuse: The Orange need just one win over their final 4 games to secure bowl eligibility for a second straight season. If they do participate in a bowl game, it would mark the first time they have played in consecutive bowls since the 1998 and 1999 seasons.

West Virginia: The conference title and automatic BCS berth may come down to their showdown with Pittsburgh on the Friday after Thanksgiving.


Here are the Mountain West standings.

Air Force: The Falcons have gotten the difficult portion of their league-slate out of the way early. They may close the year on a 5-game sinning streak.

Boise State: What more can you say about the Broncos? Outside of TCU, they are unlikely to be challenged down the stretch. They just need to get out their Stanford and Oklahoma State voodoo dolls.

Colorado State: The Steve Fairchild era began quite well believe it or not. The Rams finished 7-6 in 2008 and then raced out to a 3-0 start in 2009, with upsets over Colorado and Nevada. However, since then, the Rams are just 6-23.

New Mexico: Will the Lobos win a game this year? Their best chance will come on November 12th when they host UNLV. If we do not include their game against Sam Houston State (a IAA school they lost to), the Lobos have scored just 7 offensive touchdowns in their other 7 games. Their date with Boise on the smurf turf on December 3rd should be fun.

San Diego State: With games against Colorado State, New Mexico, and UNLV left on the schedule, the Aztecs have a great shot at a second straight bowl game. However, they have disappointed, particularly on defense.

TCU: The defensive rating is buoyed a great deal by holding New Mexico to 85 total yards. The Horned Frogs aren't nearly as good on that side of the ball as they have been the past 3 seasons.

UNLV: The rebuilding job continues in Las Vegas. They do stand a good chance of not finishing in the basement, so there's that.

Wyoming: A pleasant surprise. The Cowboys still have TCU and Boise to play, but could get to 8 regular season wins for the first time since 1998.


Here are the Sun Belt standings. 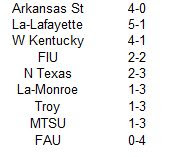 Arkansas St: At 4-0 in the conference, the Red Wolves are threatening for their second ever bowl bid under first-year head coach Hugh Freeze (of The Blindside fame).

Florida Atlantic: Will the Owls go winless? Their best chance for a 'W' is likely at home against UAB.

Florida International: The Panthers have under-performed after raising expectations with a 3-0 start, but still have a shot at a second consecutive bowl game.

Louisiana-Lafayette: Like Arkansas State, the Ragin' Cajuns have surprised folks (at least those who have been paying attention) with a great start under a first-year coach (Mark Hudspeth).

Louisiana-Monroe: Statistically, the Warhawks have been the best team in the Sun Belt. However, a pair of close conference losses, and a tough non-conference schedule means they must win out to have any shot at their first ever bowl game.

Middle Tennessee State: The Blue Raiders have also been very strong statistically, but close losses (1-3 in one-score games) and a tough non-conference schedule means they also have no margin for error down the stretch.

Troy: The King is dead! After winning at least a share of 5 straight Sun Belt titles, the Trojans have fallen on hard times. Their defense, awful last season, has remained as such, and the offense has regressed.

Western Kentucky: After winning just two league games in their first two seasons in the Sun Belt, the Hilltoppers are riding a four-game Sun Belt winning streak. If only they hadn't lost in grisly fashion to Indiana State (IAA) by a 44-16 count, they could be making postseason plans.


Finally, here are the WAC standings.

Fresno St: The Bulldogs have been mediocre in the WAC and unless they play (and win) a bowl game against a BCS-conference school, will not have beaten a BCS-conference opponent for the first time since 2006.

Hawaii: The Warriors shot at a second-straight league title will likely come down to their trip to Reno on November 12th.

Idaho: The Vandals have fallen off a cliff offensively. In their seven games versus IA opponents, they have scored just 9 offensive touchdowns.

Louisiana Tech: The Air-Raid has yet to take off, but the defense is among the best in the conference.

Nevada: The Wolfpack play an entertaining brand of football, and with 3 of their final 4 games coming at home, have a great shot at taking the league crown.

San Jose St: The Spartans did not beat a single IA team last season, but have already won three such games in 2011.

Utah St: America's unluckiest team. 4 of their 5 losses have come by a combined 15 points. The Aggies have outgained their seven opponents by nearly 1000 total yards, averaged nearly two yards more per play, and outscored them by 56 points. Going forward, that means they are very dangerous, but sitting at 2-5, a bowl bid is hardly a sure thing.
Posted by matt at 2:16 PM