For regular readers of this fine blog, you know that one of the tools I use to recap the previous and predict the next college football season is SDPI (Standard Deviation Power Index). The tool measures how far above or below average a team is relative to its conference mates in terms of gaining and preventing yards. Two years ago I decided to calculate SDPI in the middle of the season. Last season I continued the tradition, and now mid-season SDPI returns. This is an attempt to handicap the conference races and provide some insight you might now get in other places. We'll begin with the MAC, Pac-12, and SEC. Enjoy. 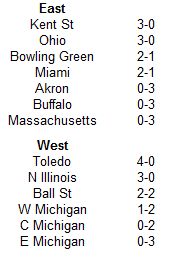 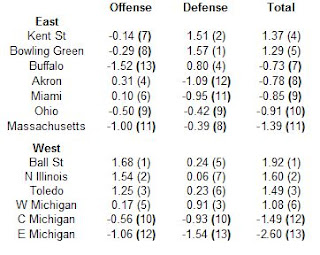 According to SDPI, and despite what you may have seen in the most recent AP Poll, the strength of the conference resides in the MAC West.

Akron: The Zips have shown some spunk, particularly on offense under new coach Terry Bowden. Quarterback Dalton Williams, a transfer from Stephen F Austin, has thrown 19 touchdown passes on the season. As a team, the Zips threw just 24 touchdowns in 2010 and 2011 combined.

Ball State: The Cardinals proved they have great potential in beating a pair of BCS-conference teams (Indiana and South Florida) in September. Unfortunately, they now have a pair of conference defeats and are probably out of the running in the division despite their impressive rating. Head coach Pete Lembo should have the keys to a BCS-conference program in the next few seasons.

Bowling Green: They gave Florida a game to open the season and with the MAC's best defense are still in the running for the MAC East with Kent State and Ohio.

Buffalo: Under Jeff Quinn, the Bulls have won just three games against IA opponents in 27 tries. Even in frigid upstate New York, his seat his heating up.

Central Michigan: All the goodwill the Chippewas engendered with the upset over Iowa has dissipated with three non-competitive losses in a row.

Eastern Michigan: After a surprising 6-6 finish in 2011, the Eagles looked like they could be in contention for at least a bowl game in 2012. However, outside of that 12 game stretch, the Eagles are just 2-28 under head coach Ron English.

Kent State: The Golden Flashes have a great chance at making their first bowl appearance since the great Don James roamed the sidelines in 1972. I've mentioned him before on this blog, but if you get a chance check out Dri Archer when the Golden Flashes host Ohio on the Friday after Thanksgiving. Archer is slight at 5'7'', but his speed makes defenses quiver. Archer is currently averaging more than 10 yards per rush and has scored touchdowns on the ground, through the air, and on returns. Oh, and he threw one last week against Army.

Massachusetts: The Minutemen have had a rough introduction to IA football. When will they get their first win? I'm thinking at home against Buffalo on November 17th.

Miami: The Redhawks have the distinction of making Ohio State's defense look great (its not) and Boise State's offense look explosive (its not).

Northern Illinois: If not for their opening one-point loss to Iowa, the defending MAC champs could be in the discussion for an unbeaten regular season. Quarterback Jordan Lynch is the MAC's version of Collin Klein. Lynch has passed and rushed for 11 touchdowns apiece and is just 82 yards short of 1000 on the ground.

Ohio: First, congrats to the Bobcats on their poll ranking, the team's first since 1968. The Bobcats are also bowl-eligible for the fourth consecutive season and sixth time in eight seasons under Frank Solich. Plus, that win over Penn State looks better and better by the week. However, the Bobcats have been less than impressive in their first three conference games, being outgained by three teams (Akron, Buffalo, and Massachusetts) that have yet to beat a IA team this season. I wouldn't favor them against any of the four teams capable of winning the MAC West (Ball State, Northern Illinois, Toledo, or Western Michigan) and they are probably not as good as Bowling Green or Kent State either. Still, they could very well be 9-0 when they host Bowling Green on the day after Election Day.

Toledo: Like Northern Illinois, the Rockets fell in a close game to a BCS-conference foe in the opening week (in OT at Arizona) and have done nothing but win since. This week, they get another chance at a major conference scalp when they host nationally ranked Cincinnati.

Western Michigan: The OT loss at Ball State pretty much sinks their division title aspirations, but the Broncos still have a shot to get to a second consecutive bowl game. 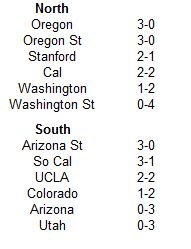 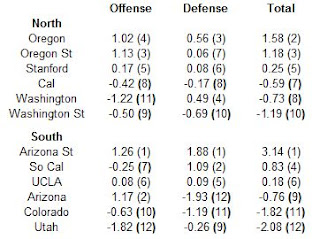 A surprising team occupies the top spot. We'll know after Thursday whether or not they are for real.

Arizona: Rich Rod's first team at Arizona is looking a lot like his last team at Michigan. Superb on offense, and utterly incapable of stopping anyone on defense.

Arizona State: The numbers love them, but before we get all hot and bothered by the Sun Devils, remember, they have played Cal, Colorado, and Utah in their first three games. Wouldn't you know it, they get a chance to prove they are for real when they host Oregon on Thursday night.

Cal: Bears have played much better in their past two conference games (wins versus UCLA and Washington State). If they have designs on a bowl game, the home game against Stanford this weekend is almost a must-win.

Colorado: Somehow, despite being deplorable on both sides of the ball, the Buffaloes already have a conference win.

Oregon: Surprisingly, the Ducks rank just fourth of offense in the early going in the conference. The Ducks have four very challenging road games left on their schedule (Arizona State, Cal, Oregon State, and Southern Cal). Win out and they will truly be a deserving national title participant.

Oregon State: After consecutive losing season, the Beavers have returned to the top-10 for the first time since 2000.

Stanford: The next offensive touchdown Stanford scores in a true road game will be their first since November 5th of last season against Oregon State.

UCLA: The Bruins are a win away from matching last season's win total. Sorry, but all my insights can't be brilliant.

Utah: Life in a BCS-conference has not been kind to the Utes. They are just 4-8 in league play as members of the Pac-12.

Washington: Quarterback Keith Price and his associates have failed to live up to expectations on offense. Thankfully, for Huskie fans, the defense has dramatically improved from the sieve they fielded last season.

Washington State: We knew there would be growing pains, but the Cougars have actually regressed on offense in Mike Leach's first season. 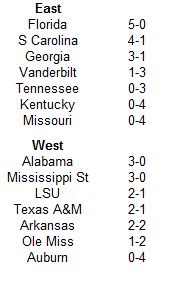 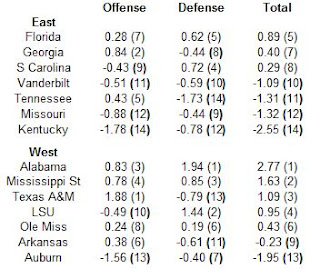 In the SEC, the power seems to once again reside in the West. The SEC West has won four of the past five SEC titles, including three in a row.

Arkansas: The Razorbacks have rebounded after a tough start to conference play. We'll see if their relative renaissance is just a function of playing Auburn and Kentucky.

Auburn: Without Cam Newton, the Auburn Tigers have gone just 7-13 versus the SEC under Gene Chizik.

Florida: The Gators have grown up. The Gators don't have to leave the state of Florida again until the SEC Championship Game (if they make it that far).

Georgia: The defense is holding them back and will probably prevent them from winning the SEC East.

Kentucky: Wildcats are just 4-16 in SEC play under Joker Phillips. Why so serious?

LSU: Cause for concern: The Tigers have scored just three offensive touchdowns in three conference games. Here's an interesting tidbit about the Tigers under coach Les Miles. The Tigers beat South Carolina on Saturday, but failed to cover the field goal spread. Aside from 2011, when the Tigers went 7-1 against the spread in their eight regular season conference games, they are just 15-33-3 against the number in SEC games under Miles.

Mississippi: The Rebels gave Alabama their toughest test of the season and actually rate out pretty well according to SDPI. Don't be shocked if they pull off an upset or two in their final five games and get to a bowl under first-year coach Hugh Freeze. Oh, and Freeze is the anti-Les Miles. Last season at Arkansas State, his Red Wolves went 9-2 against the number. Thus far in 2012, the Rebels are 5-1 against the spread, giving Freeze a 14-3 career mark.

Mississippi State: The win over Tennessee somewhat validated their impressive start to the season. I don't think they are the second-best team in the conference, but they have taken care of business against weak competition in the early going.

Missouri: Their first foray into the SEC has not gone quite as well as they had hoped.

South Carolina: Their low-rating mostly stems from their most recent game against LSU where the Tigers nearly doubled them up in total yards. The good news is that loss did next to nothing to hamper them in their quest to win the SEC East.

Texas A&M: Who is Johnny? Johnny Manziel, the freshman quarterback for the Aggies has already accounted for 24 touchdowns and is well on his way to a 3000-yard passing and 1000-yard rushing season.

Vanderbilt: With their failure to cover against Florida on Saturday, the Commodores are now 7-1 against the number in home games under James Franklin.
Posted by matt at 4:17 PM