Its time for our third installment of SDPI. Last week, among other things, I told you to be wary of large Big 12 favorites that were likely overrated, and lo and behold Texas and Oklahoma were challenged despite being heavy favorites. Of course, I also told you that Memphis had one of the better defenses on Conference USA. This week, we'll see what the numbers tell us about the Mountain West and Sun Belt. Next week, we'll finally get to the Big East and WAC. 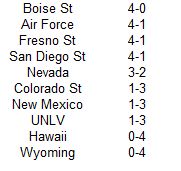 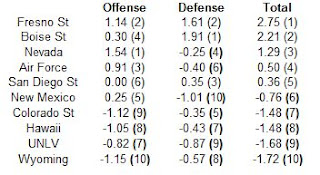 The numbers love Fresno State, and while the Broncos did beat them on the Smurf Turf, you have to be impressed with Tim DeRuyter's success in his first season in the valley.

Air Force: The Falcons have to be kicking themselves for their loss to UNLV. Otherwise, with a schedule devoid of Boise State, they could be in position for their first conference title since 1998.

Boise State: Despite their offensive reputation, the Broncos continue to make their hay with the best and most consistent mid-major defense.

Colorado State: The Jim McElwain era began with a win over in-state rival Colorado. Unfortunately, the Rams went eight weeks before their next win, on Saturday against Hawaii.

Fresno State: If the Bulldogs can survive a trip to Reno on November 10th, they have a chance to enter the postseason with an opportunity to win ten games for the first time since 2001, when another Carr was quarterbacking the team.

Hawaii: The Warriors have been an absolute disaster in their first season under Norm Chow. Unfortunately, Boise State, Fresno State, and Air Force are still on the schedule. At 1-6, the Warriors could lose ten games for the first time since 1998.

Nevada: Two weeks ago, the Wolfpack was 3-0 in the conference and looking forward to hosting Boise on December 1st with the conference title on the line. Now after two straight losses, and with Fresno and Boise remaining on the schedule, they could end the regular-season on a five-game skid.

New Mexico: The Lobos won three games from 2009-2011. They have won four thus far in 2012, and have an outside shot at becoming bowl-eligible. Check out junior running back Kasey Carrier. He has four consecutive 100-yard rushing games, including a 338 yard performance versus Air Force.

San Diego State: Rocky Long lied to us! After contemplating going for it on fourth down often during the offseason, the Aztecs have have just 14 fourth down conversion attempts which is tied for 46th nationally.

UNLV: The Rebels have beaten Air Force, but no one else. They are currently 5-29 under head coach Bobby Hauck. During his seven seasons as head coach of Montana (a IAA power), his teams lost 17 total games.

Wyoming: The Cowboys have an interesting on-again, off-again relationship with lady luck under head coach Dave Christensen. In odd-numbered years, Christensen's first season of 2009 and then last season, the Cowboys are a perfect 11-0 in one-score games. In even-numbered years, the Cowboys are 3-7 in one-score games, including a 1-4 mark this season. In other words, folks in Laramie should wait until next year to buy that lottery ticket. 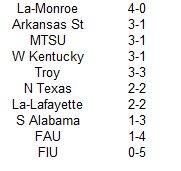 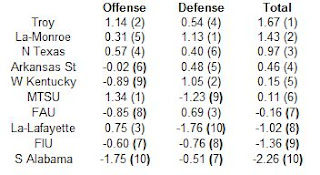 A familiar team is at the top of the Sun Belt ratings, but not the standings. That honor belongs to the team that was the toast of September.

Arkansas State: The Red Wolves were due for some regression after their perfect Sun Belt campaign last year, but halfway home they remain contenders.

Florida Atlantic: Congrats to the Owls who broke a 14-game Sun Belt losing streak with their upset win over Troy on Saturday. It was their first win against a IA opponent under first-year coach Carl Pelini. Don't look now, but the former Nebraska defensive coordinator has the Owls playing pretty well on that side of the ball.

Florida International: They came in as heavy favorites to win the conference, and here we are almost in November, and they have zero conference wins. Sometimes you just never know.

Louisiana-Lafayette: The Ragin' Cajuns have experienced some adversity, particularly on defense, where they rank last in the conference, but they have four wins banked and need just two more to become bowl-eligible for the sixth time in the last eight seasons.

Louisiana-Monroe: If you forgot about them after their September hit and pair of near misses, you'll be happy to know they have won five in a row.

Middle Tennessee State: Another reason you never know. The Blue Raiders have somehow managed to lose to a IAA team (McNeese State) at home, and beat an ACC team (Georgia Tech) on the road.

South Alabama: Welcome to IA football! The Jaguars rate out as the worst team in the conference, but already have a conference win banked.

Troy: They rate out as the best team in the conference, but with three league losses, they have virtually no shot at the title. Plus with games left against Tennessee and Navy, they may not get to bowl-eligibility either.

Western Kentucky: Standing at 6-2 with four games remaining, the Hilltoppers (along with the Warhawks of Louisiana-Monroe) have a shot at winning ten games in the regular season. That would be quite an achievement for a team that was winless in 2009.
Posted by matt at 4:10 PM