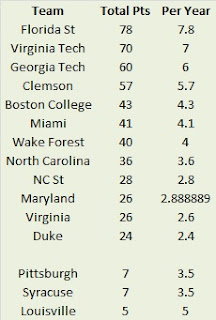 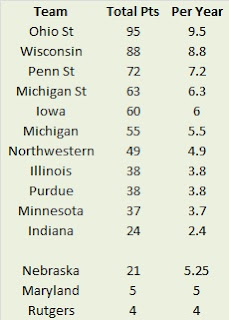 The top of the Big 10 heap is not a dramatic revelation. Prior to the conference expanding and splitting into divisions in 2011, Ohio State won at least a share of the first six Big 10 titles in the period we are examining. Since the league expanded, Wisconsin has the most Big 10 Championship Game appearances with three (although they won in 2012 thanks to sanctions in Columbus and State College) while Ohio State and Michigan State are tied with two. Nebraska has the other appearance. For those easily distracted by the new East/West division set up, during the first three years of divisional play (the Leaders and Legends fiasco), Ohio State and Wisconsin were actually in the same division. Whether that was the Leaders or Legends division is a question that should never be asked. Maryland and Rutgers acquitted themselves reasonably well during their respective preliminary forays into Midwestern football. For Rutgers, after slumming with gridiron peasants like Connecticut, South Florida, and Temple for the past quarter century or so, the guaranteed yearly battles with Ohio State, Michigan, Michigan State, and Penn State likely have fans partying like its 1869.
Posted by matt at 9:36 AM