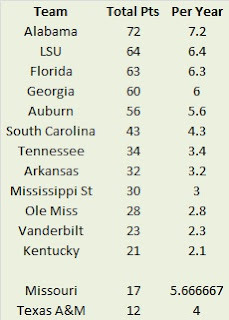 I don’t think many college football fans are surprised to see Alabama as the most dominant team in the SEC. What may surprise college football fans is that Alabama ‘only’ won three SEC titles in the past decade. In the same way that Ronald Reagan ‘only’ won 59% of the popular vote in 1984, this is both impressive and yet not quite as remarkable as you remembered. The leaderboard aligns closely with the number of conference titles. After Alabama’s trifecta, Auburn, Florida, and LSU all have a pair of SEC titles with Georgia adding a single championship. Alabama also has the most SEC Championship Game appearances with four. In 2010, South Carolina enjoyed a historic season by not only playing in their first SEC Championship Game, but also breaking the Florida/Georgia/Tennessee hegemonic hold on the SEC East. In the first 18 seasons of divisional play, some combination of the Gators, Bulldogs, or Volunteers captured every SEC East crown. And speaking of divisional crowns, in just three seasons of play in the SEC, Missouri has already won twice as many SEC East titles as Kentucky, South Carolina, and Vanderbilt combined. In the SEC Championship Game itself, the west has reeled off six consecutive victories (with five coming by at least 17 points). Before we close this chapter of Statistically Speaking, I will leave you with what I feel is an extraordinary piece of statistical minutia regarding the SEC. Since 2005, every SEC team (including newbies Missouri and Texas A&M) has had at least one season with at least four conference wins and one season with at least five conference losses (i.e. a .500 conference record and a losing conference record). Kentucky is the only team to not have a winning SEC record in that span (topping out at 4-4 in 2006). Do with that what you will. Until next time.
Posted by matt at 8:17 AM