College football's offseason is among the longest of all sports. Except for the World Cup or Olympic Games, no other sport makes you wait longer between the end of one season and the beginning of another. To pass the thirty something weeks before college football returns, each of the ten FBS conferences will get two posts (one per week) reviewing the season that was in terms of Yards per Play and Adjusted Pythagorean Record. We won't play favorites in terms of Power Five versus Group of Five, as we'll tackle each league in alphabetical order. We begin with the American Athletic Conference. Here are the AAC standings. 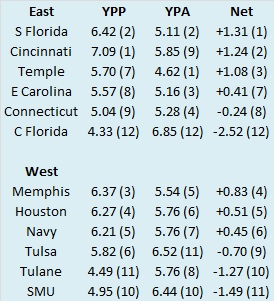 College football teams play either eight or nine conference games. Consequently, their record in such a small sample may not be indicative of their quality of play. A few fortuitous bounces here or there can be the difference between another ho-hum campaign or a special season. Randomness and other factors outside of our perception play a role in determining the standings. It would be fantastic if college football teams played 100 or even 1000 games. Then we could have a better idea about which teams were really the best. Alas, players would miss too much class time, their bodies would be battered beyond recognition, and I would never leave the couch. As it is, we have to make do with the handful of games teams do play. In those games, we can learn a lot from a team’s YPP. Since 2005, I have collected YPP data for every conference. I use conference games only because teams play such divergent non-conference schedules and the teams within a conference tend to be of similar quality. By running a regression analysis between a team’s Net YPP (the difference between their Yards Per Play and Yards Per Play Allowed) and their conference winning percentage, we can see if Net YPP is a decent predictor of a team’s record. Spoiler alert. It is. For the statistically inclined, the correlation coefficient between a team’s Net YPP in conference play and their conference record is around .66. Since Net YPP is a solid predictor of a team’s conference record, we can use it to identify which teams had a significant disparity between their conference record as predicted by Net YPP and their actual conference record. I used a difference of .200 between predicted and actual winning percentage as the threshold for ‘significant’. Why .200? It is a little arbitrary, but .200 corresponds to a difference of 1.6 games over an eight game conference schedule and 1.8 games over a nine game one. Over or under-performing by more than a game and a half in a small sample seems significant to me. In the 2015 season, which teams in the AAC met this threshold? Here are the AAC teams sorted by performance over what would be expected from their Net YPP numbers. 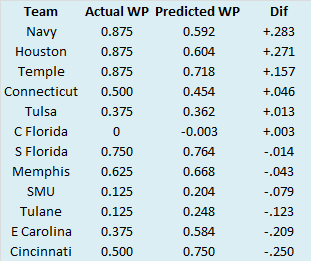 Before we get started, no, that is not a typo in the table. Based on their poor performance, the regression analysis would have expected Central Florida to win slightly fewer than zero games. Cincinnati and East Carolina under-performed based on their YPP numbers (and Ruffin McNeil lost his job because of it) while Houston and Navy produced better records than one would expect from their Net YPP numbers. For Cincinnati and East Carolina, the usual suspects were in play here. Both schools combined for a 1-5 record in one-score games. If both teams had won half of their close games as we would expect in the long run, their records would have more closely matched up with their YPP numbers. Cincinnati also had a big problem with turnovers, finishing with a margin of -12 in league play (second worst) that contributed to their disappointing season. For Houston and Navy, you have to dig a little deeper to find answers for their success. Houston went 2-1 in one-score games, which hardly implies they were extremely lucky, while Navy did not play any close games in the AAC. For Houston, their overall offensive numbers are depressed by their performance in their only loss when quarterback Greg Ward Jr was injured. In their other seven games, their offensive numbers would have ranked second in the AAC. For Navy, the reason for their difference in record is turnovers, pace, and capitalizing on scoring opportunities. The Midshipmen committed just three turnovers in their eight conference games and their margin of +11 led the AAC. While Navy’s defense was about average in the AAC in Yards per Play Allowed (seventh), they faced the fewest plays of any defense in the AAC thanks to Navy’s ball control offense. Navy faced about seven fewer plays per game than the average AAC defense and about 17 fewer per game than lightning fast Tulsa. Limiting possessions can ‘hide’ a defense and mitigate the impact of lacking an elite unit. They also ranked first in the AAC in offensive touchdowns despite ranking fifth in yards per play. Navy was able to finish drives and score more points than would be expected based on their per play averages.

Next week, the AAC gets the APR treatment and we'll also take a closer look at the rise of South Florida.
Posted by matt at 5:00 PM