Our first two posts of the offseason have examined the American Athletic Conference. Now we turn our attention to the Atlantic Coast Conference. Here are the ACC Standings. 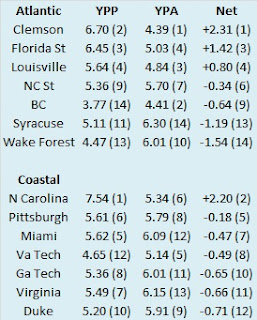 College football teams play either eight or nine conference games. Consequently, their record in such a small sample may not be indicative of their quality of play. A few fortuitous bounces here or there can be the difference between another ho-hum campaign or a special season. Randomness and other factors outside of our perception play a role in determining the standings. It would be fantastic if college football teams played 100 or even 1000 games. Then we could have a better idea about which teams were really the best. Alas, players would miss too much class time, their bodies would be battered beyond recognition, and I would never leave the couch. As it is, we have to make do with the handful of games teams do play. In those games, we can learn a lot from a team’s Yards per Play (YPP). Since 2005, I have collected YPP data for every conference. I use conference games only because teams play such divergent non-conference schedules and the teams within a conference tend to be of similar quality. By running a regression analysis between a team’s Net YPP (the difference between their Yards per Play and Yards per Play Allowed) and their conference winning percentage, we can see if Net YPP is a decent predictor of a team’s record. Spoiler alert. It is. For the statistically inclined, the correlation coefficient between a team’s Net YPP in conference play and their conference record is around .66. Since Net YPP is a solid predictor of a team’s conference record, we can use it to identify which teams had a significant disparity between their conference record as predicted by Net YPP and their actual conference record. I used a difference of .200 between predicted and actual winning percentage as the threshold for ‘significant’. Why .200? It is a little arbitrary, but .200 corresponds to a difference of 1.6 games over an eight game conference schedule and 1.8 games over a nine game one. Over or under-performing by more than a game and a half in a small sample seems significant to me. In the 2015 season, which teams in the ACC met this threshold? Here are the ACC teams sorted by performance over what would be expected from their Net YPP numbers 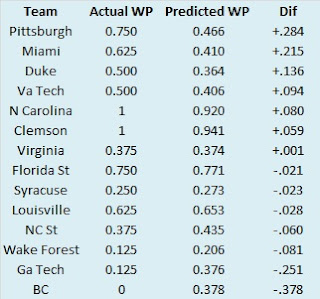 Georgia Tech and Boston College under-performed based on their YPP numbers while Pittsburgh and Miami produced better records than one would expect. Georgia Tech entered the season with great expectations after playing in the ACC Championship Game and winning the Orange Bowl in 2014. The Jackets dominated a pair of over-matched foes to begin the year and rose to number 14 in the AP Poll. Then, they encountered a scenario that would play out multiple times in 2015. Their offense was held in check by a competent team (this time by Notre Dame) and they lost a one-score contest. The Yellow Jackets went 1-4 in one-possession ACC games, and if we include their non-league losses to Notre Dame and Georgia, their overall mark in close games was just 1-6. Couple that with a turnover margin of -8 in ACC play (tied for last in the conference), and it becomes clear why the Yellow Jackets disappointed in 2015. However, the one tight game they did manage to win may have been worth the other six losses. Boston College wasted a fantastic defense by fielding one of the worst offenses of the modern era (we’ll discuss them more in depth next week). They also struggled in close games, with half of their league losses coming by three points or less. 2015 was an interesting year for Miami. After posting the best YPP differential in the ACC in 2014 (and finishing 3-5), Al Golden was squarely on the hot seat. The Hurricanes opened ACC play 1-2 and Golden was canned. The Hurricanes proceeded to win four of their last five games under interim coach Larry Scott, including one in very dramatic fashion. The Hurricanes finished 3-1 in one-score ACC games, but I think the main reason for the disparity between their YPP and their conference record was the way they played in two of their losses. I rarely question the effort of football players as they are tougher than I could ever hope to be, so I don’t know if the Hurricanes were apathetic against Clemson and North Carolina, but they lost both of those games by a combined 96 points. Those two poor performances do a good job of anchoring their overall YPP ratings. Finally, Pittsburgh enjoyed the largest positive disparity between their YPP and overall record. The Panthers seemed set on being the Cardiac Cats in their first season under Pat Narduzzi. Including their non-league clashes with Youngstown State and Iowa, seven of the Panthers’ first eight games were decided by one-score. The Panthers won their first four league games by a combined 17 points to put themselves in contention for the Coastal Division crown. They lost their last two one-score games to drop out of the race, but posted their first winning league record since 2011 when they were still members of the Big East.

Next week, the ACC gets the APR treatment, and we'll take a closer look at Boston College and their poor offense/strong defense combination.
Posted by matt at 4:02 PM