Last week, we looked at how AAC teams fared in terms of yards per play. This week, we turn our attention to how the season played out in terms of the Adjusted Pythagorean Record, or APR. For an in-depth look at APR, click here. If you didn’t feel like clicking, here is the Reader’s Digest version. APR looks at how well a team scores and prevents touchdowns. Non-offensive touchdowns, field goals, extra points, and safeties are excluded. The ratio of offensive touchdowns to touchdowns allowed is converted into a winning percentage. Pretty simple actually.

Once again, here are the 2016 AAC standings. 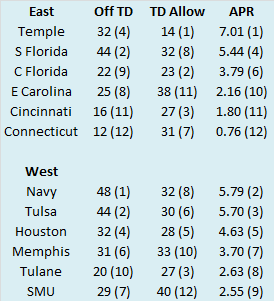 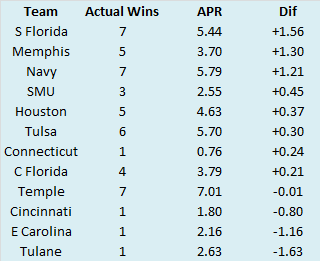 I use a game and a half as a line of demarcation to determine if teams drastically over or under perform their APR. By that standard, South Florida and Tulane were the only teams with actual records far removed from their APR. South Florida finished ranked for the first time in school history, but was a bit fortunate to go 7-1 in league play. The Bulls finished 3-0 in one-score conference games and will probably need a little defensive improvement to remain near the top of the east division next season. On the other end of the spectrum, Tulane did not become a triple-option machine in Willie Fritz’s first season in charge. They won only a single conference game, matching their conference win total from 2015, but were a bit unlucky. They were 0-2 in one-score games and were -4 in net non-offensive touchdowns with three defensive returns returns turning a tight contest against Central Florida into a laugher.

Regular readers of this blog know one of the things I am most interested in is a coach/team’s record in close games. Since the college football season is so short, close games play an outsized role in determining how we evaluate and remember certain seasons. What I had been meaning to do for many years was determine if certain coaches possessed an ability to win close games. While I believe that close games involve a great deal of randomness, I think coaches can have a modest (though probably less than what the media and most fans attribute) impact on these close games both positively and negatively. In the interest of furthering this research, I looked at every coach who was active at the beginning of the 2016 and who had coached at least ten years as a head coach at the FBS level at the end of the 2016 season. In other words, if a coach had at least ten years of experience prior to the 2016 season and was fired before it was over (Les Miles), they are included. Similarly, if 2016 represented their tenth year on the job and they made it to the end, they are also included (Butch Jones). I chose ten years as an arbitrary cut off point so that each coach would have a significant sample size of close games. Certainly one or two years into a coaching career is not enough data to evaluate whether or not a coach possesses (if it exists) an ability to win close games. I chose ten because it was a nice round number and because it produced 36 coaches who met the criteria which I thought was a decent enough sample. So what did I find? Glad you asked.

For starters, there does seem to be a relationship between good, or at least long-tenured coaches, and an above average record in close games. The 36 coaches in this cohort, in over 2200 games, produced a combined winning percentage of nearly 56% in one-score (decided by eight points or less) games. If close games were ultimately decided by random chance, we would expect their winning percentage to be much closer to 50%. This likely means one of two things. Either good (in this case I am equating long-tenured to good) coaches do have a positive ability to influence close games. Or, close games are random, and as such if the fates do not smile upon you, you are unlikely to last very long as a head coach. I am inclined to believe the former. Anyway, that is the aggregate data. But let’s look closer at some micro level data. Which coach has performed the best in close games? I began this data excursion expecting to find Bill Snyder as the guru of close wins. Snyder has been solid in close games in his quarter century on the sidelines in Manhattan, Kansas (posting a 55-40 mark in one-score games), but I was surprised at one of the names near the top of the leaderboard. Since this is appearing in the post about the American Athletic Conference, perhaps you can guess who it is. Here are the top coaches sorted first by overall winning percentage and then by games above .500 in one-score contests. 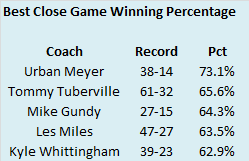 It does appear that winning close games is a repeatable skill, at least to some extent, and not merely a sequence of random coin flips. However, judging by the names at the top of the leaderboard, perhaps these close games should serve as a sort of indictment against these coaches. Take Meyer and Miles for example. Meyer is 29-11 in one-score games as a head coach at Florida and Ohio State while Miles was 40-20 in one-score games at LSU. I didn’t dig through all the data, but I would assume Meyer and Miles were favorites, and perhaps large ones at that, in a majority of those one-score games. Thus, they probably had more talented teams and probably should not have been in as many one-score games to begin with. Think of winning these one-score games as more relief (pulling one out of the fire) than cause for celebration (winning a close game against a better opponent). Just something to chew on.
Posted by matt at 3:44 AM