Next up on our review tour is the ACC, home of the current national champions. Here are the ACC standings. 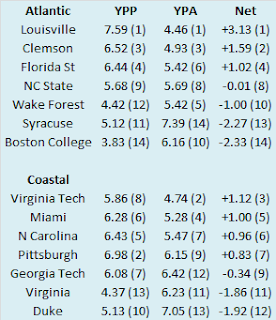 College football teams play either eight or nine conference games. Consequently, their record in such a small sample may not be indicative of their quality of play. A few fortuitous bounces here or there can be the difference between another ho-hum campaign or a special season. Randomness and other factors outside of our perception play a role in determining the standings. It would be fantastic if college football teams played 100 or even 1000 games. Then we could have a better idea about which teams were really the best. Alas, players would miss too much class time, their bodies would be battered beyond recognition, and I would never leave the couch. As it is, we have to make do with the handful of games teams do play. In those games, we can learn a lot from a team’s YPP. Since 2005, I have collected YPP data for every conference. I use conference games only because teams play such divergent non-conference schedules and the teams within a conference tend to be of similar quality. By running a regression analysis between a team’s Net YPP (the difference between their Yards Per Play and Yards Per Play Allowed) and their conference winning percentage, we can see if Net YPP is a decent predictor of a team’s record. Spoiler alert. It is. For the statistically inclined, the correlation coefficient between a team’s Net YPP in conference play and their conference record is around .66. Since Net YPP is a solid predictor of a team’s conference record, we can use it to identify which teams had a significant disparity between their conference record as predicted by Net YPP and their actual conference record. I used a difference of .200 between predicted and actual winning percentage as the threshold for ‘significant’. Why .200? It is a little arbitrary, but .200 corresponds to a difference of 1.6 games over an eight game conference schedule and 1.8 games over a nine game one. Over or under-performing by more than a game and a half in a small sample seems significant to me. In the 2016 season, which teams in the ACC met this threshold? Here are the ACC teams sorted by performance over what would be expected from their Net YPP numbers. 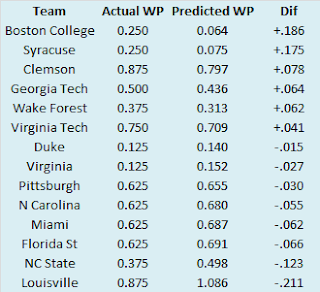 No team really stood out as vastly outperforming their underlying statistics. Two of the poorer teams in the conference did manage to win a pair of games each despite YPP numbers that are often correlated with winless or one-win seasons. However, the team that produced the biggest disparity between its record and its expected record was Louisville. The Cardinals put up such strong YPP numbers they basically broke the regression analysis as it is obviously impossible to win more than 100% of your games, though I assume Nick Saban is hard at work at attempting to do so. Still, I think it is useful to look at Louisville’s season. I trust numbers and ratings systems more than I trust my own eyes or some expert’s opinions, but they are far from infallible. Whatever rating system one employs will either over or under-estimate certain teams thanks to a small sample size (an eight or nine game conference season) and a plethora of other variables related to the fact that teams are dynamic. Better players progress as they gain experience. Poorer players stay the same or get worse. Some players get injured and miss time. Coaches break down film and try to identify weaknesses. Travel and fatigue play a role in a team’s overall numbers. The list goes on. Louisville appears to be a team that is overrated, and perhaps extremely overrated when using YPP numbers. While the Cardinals did win seven of their eight league games, with their only loss coming in a tight game against eventual national champion Clemson, there were signs this team might not be as strong as some of their blowout wins portended. Consider that Louisville needed a roughing the kicker penalty to put Duke away at home in a ten point win. They also needed a late touchdown pass to escape on the road against a Virginia team that did not win a home conference game. Plus, while they beat Wake Forest by more than 30 points at home, even with advanced knowledge of what was coming, the Cardinals actually trailed the Deacons at the start of the fourth quarter. Once conference play ended, Louisville delivered arguably three of their worst performances on the season. Against a Houston team that would allow 46 points to Navy, 38 points to SMU, and 48 points to Memphis, Louisville with the eventual Heisman winner, netted ten points in an embarrassing defeat. In their next game, the offense returned to form, but the defense, ranked first in the ACC in yards allowed per play permitted Kentucky to score more than 40 points against a Power 5 team for the first time in over two years. Finally, in their bowl game, Louisville could not move the ball against one of the SEC’s best defenses and lurched into the offseason on a three-game skid. Couldn’t happen to a nicer guy.

Despite the fact that Louisville may have ‘fooled’ the conference YPP statistics, those numbers did a good job of identifying one team in particular that was overrated based on national rankings. Boston College had a truly elite defense in 2015, holding ACC opponents to 4.41 yards per play and allowing just twelve offensive touchdowns. However, thanks to a poor offense and some bad luck they did not scrounge up a single conference victory. If you just look at their raw 2016 defensive numbers, you might be inclined to believe they were elite again. You would be wrong. In 2016, Boston College allowed 314 yards per game, 5.09 yards per play, and 25 points per game. Those statistics ranked ninth, 25th, and 44th nationally in those respective categories. However, if we look at the eight ACC games the Eagles played, they allowed over six yards per play, a figure that ranked tenth in the fourteen-team league and 37 offensive touchdowns which ranked twelfth. How then did they convince the nation they were good? They answer is their non-conference schedule. The Eagles played Buffalo, Connecticut, Massachusetts, and Wagner in non-conference play. Buffalo and Connecticut are mid-major teams that ranked ninth in their respective leagues in yards play. Massachusetts does not play in a conference, but they ranked 94th nationally in yards per play. And Wagner is of course, an FCS school. Against those four overmatched opponents, Boston College allowed 104 yards per game, 2.12 yards play pay, and twenty total points. Since those games represented a third of their regular season schedule it elevated their national numbers in much the same way that picking all four number 1 seeds to win their first round game artificially inflates accuracy in NCAA tourney pools. It’s an easy choice that almost everyone gets right and not very useful in determining your real quality.
Posted by matt at 3:32 AM