Last week, we looked at how ACC teams fared in terms of yards per play. This week, we turn our attention to how the season played out in terms of the Adjusted Pythagorean Record, or APR. For an in-depth look at APR, click here. If you didn’t feel like clicking, here is the Reader’s Digest version. APR looks at how well a team scores and prevents touchdowns. Non-offensive touchdowns, field goals, extra points, and safeties are excluded. The ratio of offensive touchdowns to touchdowns allowed is converted into a winning percentage. Pretty simple actually.

Once again, here are the 2016 ACC standings. 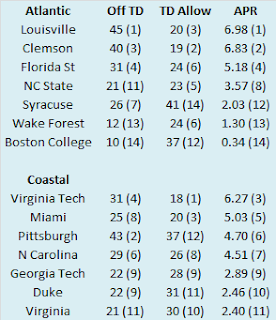 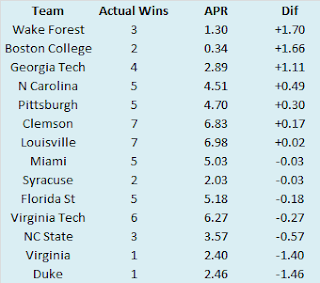 I use a game and a half as a line of demarcation to determine if teams drastically over or under perform their APR. By that standard, Wake Forest and Boston College were the only teams with actual records far removed from their APR. Neither team was particularly fortunate in close games, with the Deacons and Eagles combining for a 3-3 record in one-score conference games. The primary reason for the disconnect was the fact that Wake and BC lost their fair share of blowouts. Four of Wake Forest’s five conference losses came by double digits and Boston College lost four of their six league games by at least 38 points. In their games against Clemson, Florida State, Louisville, and Virginia Tech, the Eagles were outscored by a combined 178 points!

I love the option and by extension, I tend to root for teams that run the option or some variation of it. Consequently, I end up watching a lot of games that involve the service academies, Georgia Southern, New Mexico, Tulane, and the only Power 5 team that currently employs it – Georgia Tech. Since I watched a great deal of Georgia Tech games this year, I noticed the Yellow Jackets were pretty abysmal at rushing the passer. In fact, Georgia Tech accumulated just 18 sacks all year. They did get to the quarterback better late in the year as they notched ten sacks in their final four games. Still, 18 sacks ranked just 107th nationally, and when you consider that Georgia Tech had an extra game to pad their total, well the number looks even worse. Of course, Georgia Tech only allowed 16 sacks on the year, which was in the top 20 nationally, so they must have protected the quarterback pretty well right? Ah, but as I mentioned before, Georgia Tech runs the option which means they attempt among the fewest passes in the nation. In fact, they threw just 160 passes in 2016. Only three teams (all three service academies) attempted fewer. So, allowing 16 sacks is not nearly as impressive as the raw total might lead you to believe when adjusting for the number of pass attempts and considering that Georgia Tech often uses the forward pass to surprise opponents. Without running the numbers, Georgia Tech seemed to possess an historic inability to rush the passer and protect their own quarterback. In the interest of determining where they ranked in recent history, I decided to run the numbers. I looked at all Power 5 teams (and Notre Dame) over the last three seasons and calculated their Sack Rate and Sack Rate Allowed.

As far as recent history goes, Georgia Tech was quite poor in 2016 at generating a pass rush and protecting their own quarterbacks on the rare occasions they attempted to pass. It is interesting that an awful Net Sack Rate does not necessarily correlate with a bad record. Georgia Tech finished 9-4 in 2016, while Maryland, South Carolina, and Vanderbilt all played in bowl games. It just goes to show that it is possible to win (at a moderate clip) despite being severely deficient at an important aspect of the game.
Posted by matt at 3:31 AM