Two conferences down, eight to go. We now head to the Midwest and the Big 10. Here are the Big 10 standings. 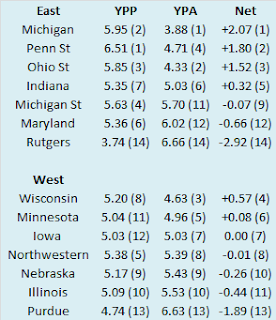 College football teams play either eight or nine conference games. Consequently, their record in such a small sample may not be indicative of their quality of play. A few fortuitous bounces here or there can be the difference between another ho-hum campaign or a special season. Randomness and other factors outside of our perception play a role in determining the standings. It would be fantastic if college football teams played 100 or even 1000 games. Then we could have a better idea about which teams were really the best. Alas, players would miss too much class time, their bodies would be battered beyond recognition, and I would never leave the couch. As it is, we have to make do with the handful of games teams do play. In those games, we can learn a lot from a team’s YPP. Since 2005, I have collected YPP data for every conference. I use conference games only because teams play such divergent non-conference schedules and the teams within a conference tend to be of similar quality. By running a regression analysis between a team’s Net YPP (the difference between their Yards Per Play and Yards Per Play Allowed) and their conference winning percentage, we can see if Net YPP is a decent predictor of a team’s record. Spoiler alert. It is. For the statistically inclined, the correlation coefficient between a team’s Net YPP in conference play and their conference record is around .66. Since Net YPP is a solid predictor of a team’s conference record, we can use it to identify which teams had a significant disparity between their conference record as predicted by Net YPP and their actual conference record. I used a difference of .200 between predicted and actual winning percentage as the threshold for ‘significant’. Why .200? It is a little arbitrary, but .200 corresponds to a difference of 1.6 games over an eight game conference schedule and 1.8 games over a nine game one. Over or under-performing by more than a game and a half in a small sample seems significant to me. In the 2016 season, which teams in the Big 10 met this threshold? Here are the Big 10 teams sorted by performance over what would be expected from their Net YPP numbers. 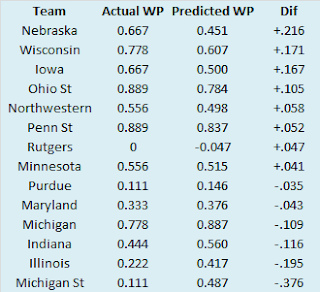 Illinois and Michigan State significantly underperformed their expected records based on their YPP numbers while Nebraska far exceeded their middling peripherals. For Michigan State, the culprit is pretty simple. The Spartans were 0-3 in one-score conference games (and really 0-4 as their final margin against Michigan was a bit misleading after Jabrill Peppers returned a two-point conversion attempt for a score). In addition, the Spartans won their only conference game (albeit against Rutgers) in dominant fashion. We’ll come back to Michigan State in a bit. For Illinois, their case is a bit harder to crack. The Illini were not especially poor in close games (1-1 record) nor did they have a particularly dreadful turnover margin (-3 in conference play). The culprit appears to be their inefficient passing attack. In their final seven conference games, Illinois managed to complete just 44% of their passes! In the modern college game, that is simply unfathomable for a non-option offense to play that poorly. Even with a decent running game, the lack of any semblance of a passing offense confined the Illini to a 2-7 record despite poor, but not horrendous peripherals. How did Nebraska post such a great conference record despite numbers that suggested they should have lost more conference games than they won? The Cornhuskers were only 2-1 in one-score conference games, so we’ll have to look elsewhere. The answer lies in two of their defeats. While Nebraska was solid in most of their games, they were awful in two of their three conference losses. Ohio State and Iowa beat the Cornhuskers by a combined score of 102-13, and the per play numbers were also brutal. Those two losses more than wiped out the margin of victory in their six conference wins (outscored those teams by 72 points). Nebraska was good, but not dominant in most of their wins, and they played like Rutgers in two of their three losses.

Michigan State was one of the most disappointing teams in 2016. The Spartans, fresh off a Big 10 title and playoff appearance, began the year in the top 15 of the AP Poll, but won just a single conference game and finished 3-9 overall. However, while their won/loss record was abysmal, their actual play was mediocre. Based on their YPP numbers, a team with Michigan State’s profile would have been expected to win about four of their nine conference games. That would have put them at about 6-6 on the year. That record is hardly cause for celebration, but it would have been quite similar to their 2012 campaign when they reset after multiple years competing for conference titles. As you may have noticed in the table regarding differences between predicted record and actual record, Michigan State undershot their projection by a significant margin. I use .200 as the arbitrary threshold of significance, but Michigan State missed out on their projection by nearly double that margin! Since I have calculated YPP data back through 2005, I decided to look at teams that had similar exaggerated discrepancies between their expected record based on YPP and their actual record. For this study, I looked at BCS/Power 5 teams that undershot their YPP projection by at least .300. Those parameters yielded fifteen BCS/Power 5 teams from 2005-2015 (and three teams from 2016, including Michigan State, Arizona, and UCLA). I then looked at how those teams performed the following season. Well, what can Michigan State expect in 2017? Take a look at the following table that summarizes the results. 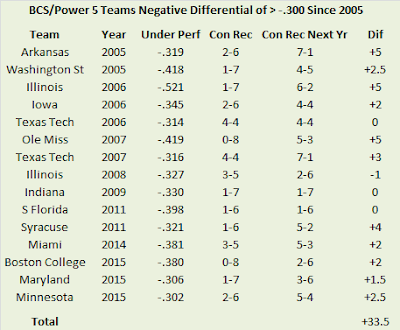 In a not shocking at all development, these teams tend to improve the next season. The fifteen teams improved by an aggregate total of 33.5 games in conference play the following season (2.23 per team). Eleven of the fifteen teams improved by at least one game, with some teams making tremendous leaps (four teams saw their conference win total improve by at least four games). Four teams saw their win totals remain the same and only one team declined. Even though Michigan, Ohio State, and Penn State occupy the same division as the Spartans, there is a high probability that the team will rebound in 2017. In fact, it would basically take the coaching prowess of Ron Zook for Michigan State not to be better in 2017.
Posted by matt at 3:29 AM