Last week, we looked at how Mountain West teams fared in terms of yards per play. This week, we turn our attention to how the season played out in terms of the Adjusted Pythagorean Record, or APR. For an in-depth look at APR, click here. If you didn’t feel like clicking, here is the Reader’s Digest version. APR looks at how well a team scores and prevents touchdowns. Non-offensive touchdowns, field goals, extra points, and safeties are excluded. The ratio of offensive touchdowns to touchdowns allowed is converted into a winning percentage. Pretty simple actually.

Once again, here are the 2016 Mountain West standings. 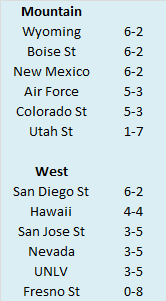 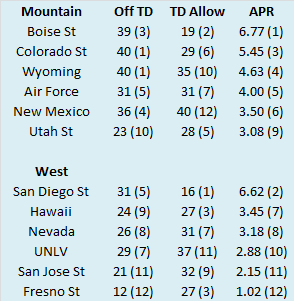 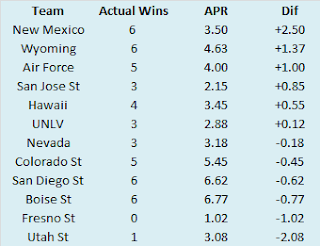 I use a game and a half as a line of demarcation to determine if teams drastically over or under perform their APR. By that standard, New Mexico outperformed their APR and Utah State underperformed. Both teams also over and underperformed their expected record based on YPP and we discussed some reasons why last week. Read last week’s post if you’re interested in why the Lobos and Aggies boasted records that differed from what we might expect.

Take another look at the Mountain West standings. I’ll wait. Did you notice that almost every team in the Mountain Division had a winning conference record? Yep. Five of the six teams won at least five of their eight conference games and three won six. Is this unique? How often does one division produce so many teams with winning records? I’m glad you asked.

Thankfully, divisional play only goes back a quarter century so I didn’t have to look back too far. It began in 1992 when the SEC opened Pandora's Box by expanding to twelve teams, splitting into two divisions, and hosting a championship game. Several conferences followed suit throughout the 90’s and now every conference except the Big 12 and Sun Belt features two divisions. I looked at all those FBS divisions since 1992 and discovered this phenomenon has only happened four times, but each occurrence has come in the past three seasons. Here is each instance listed chronologically.

The Pac-12 plays nine conference games which means teams cannot finish with a .500 conference record. Depending on how the schedule shakes out, this gives a team that might have only finished 4-4 an opportunity to steal an extra game and eke out a winning record. It also helps when the last place team in the division does not win a game and in effect donates a victory to the other five members. Perhaps the Pac-12 can develop a plaque or award to honor the 2014 South Division as the first to feature five teams with winning conference records.

2016 was not the first time the Mountain West boasted five teams with winning conference records. It also happened the year before. While the last place team in the division did manage a pair of conference wins, they came in games against the West Division so the Cowboys did not win a game against their division foes.
Big 10 West 2016 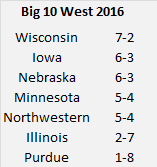 Personally, I think this one deserves an asterisk and perhaps two because this division has seven teams and the conference played nine games. Despite winning three conference games between then, Illinois and Purdue did not beat any of the other five teams in the division. They merely provided them with a combined ten conference wins.

Not only did the Mountain West pull off this improbable accomplishment two seasons in a row, they did it with a nice ‘worst to first’ story as Wyoming won the division after finishing last in 2015. Again, the last place team in the division, Utah State, did not win a single game against divisional foes.

The past two seasons have truly been unique in the Mountain West. The Mountain Division has produced five teams with winning conference records both seasons despite not having the presence of a seventh team or a ninth conference game. It doesn’t mean a great deal in the grand scheme of things. In fact, most people probably didn’t even realize it happened, but it shows that if you pay close attention you might see something historic.
Posted by matt at 2:38 PM