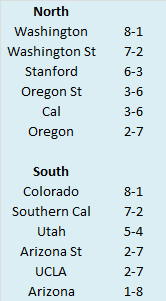 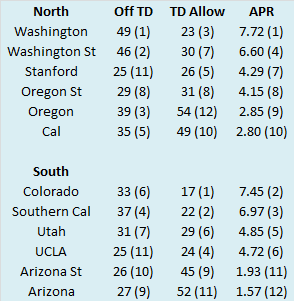 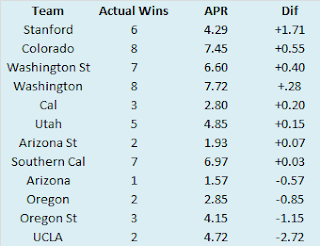 I use a game and a half as a line of demarcation to determine if teams drastically over or under perform their APR. By that standard Stanford exceeded their expected record and UCLA under-performed relative to their expected record. Last week, we went over some reasons regarding UCLA poor record, so let's focus on Stanford. The Cardinal were not particularly lucky in on-score games, as they played in just one and lost it to Colorado. Of course, while the final score may not say so, their game against UCLA for all intents and purposes was a one-score affair. The Cardinal scored late to take the lead and then scored a defensive touchdown on the final play of the game for a misleading final score. Its just too bad Brent Musburger was not calling the game. What about turnover margin? No, Stanford was middling in that regard, posting a -1 in-conference turnover margin. So how did Stanford manage to drastically exceed their expected record? The answer lies in their two games with the Washington schools. Over an eight-day stretch in late September and early October, Stanford lost to Washington and Washington State by a combined margin of 64 points. These two blowouts dragged down their scoring margin and tarnished their overall profile despite them winning six of their other seven conference games.

I have been blogging about Yards Per Play and APR for FBS conferences for nearly two years now and I have data going back to 2005. With that in mind, I wanted to see if some coaches had any particular knack for exceeding or failing to exceed their expected record based on YPP and APR. As many coaches have come and gone in the twelve seasons I have data, I decided to just look at Pac-12 teams (for obvious reasons) and just look at teams since 2011, when the conference last expanded. I arbitrarily decided to only look at coaches who coached for at least three seasons so that no one-year wonders are unfairly represented. Obviously, using three years and beginning in 2011 means we miss out on quite a few notable Pac-10/12 coaches including Pete Carroll, Chip Kelly, and Jeff Tedford among many others. Perhaps a future post will be more inclusive. Anyway, here are all Pac-12 coaches since 2011 who have coached at least three seasons in the conference ranked by the average number of wins per season they exceed their APR. 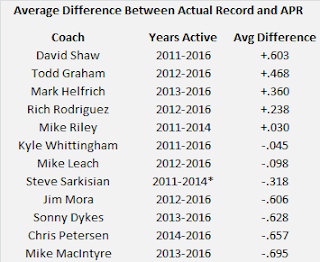 I placed an asterisk by Steve Sarkisian as I elected not to count any of his games from 2015, when he was relieved of his duties after three conference games. APR and YPP numbers are done at the season level, so it made sense to ignore the three games he coached in 2015. Stanford had the largest positive difference of any Pac-12 team between their APR and actual record in 2016 and that is nothing new. Since 2011, David Shaw leads all Pac-12 coaches in average number of wins by which he exceeds his APR. Todd Graham is a distant second, with the recently fired Mark Helfrich third, and Rich Rodriguez fourth. On the other end of the spectrum, Jim Mora, Sonny Dykes, Chris Petersen, and Mike MacIntyre have averaged more than half a win fewer than expected based on their APR. Some of this can be blamed on small sample size as Washington was nearly two and a half game below their APR last season which significantly skews the data considering Petersen has only been in Seattle for three years. Similarly, UCLA has more than two and a half games worse than their APR in 2016 which negatively impacts Jim Mora's overall numbers.

Let's now turn our attention to Yards Per Play. Using the same criteria previously outlined, here are the Pac-12 coaches sorted by the average amount they exceed their expected record based on YPP. 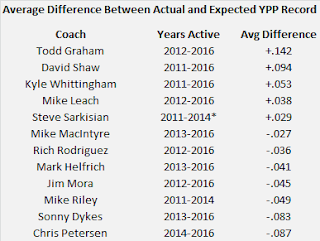 Keep in mind while APR was based on games (i.e. David Shaw's +.603 means his teams exceeded their APR by six tenths of a game on average), the expected record based on YPP is based on winning percentage. Thus, Todd Graham's +.142 translates to about 1.3 games over a nine game conference season (.142*9). Once again, Graham and Shaw are at the top of the list. And again, Mora, Dykes, and Petersen are near the bottom, while MacIntyre has been more average by this measure. As I mentioned earlier, sample size is an issue when looking at these numbers.

So what do these numbers mean? Is Chris Petersen overrated as a coach because his teams appear to under-perform their records based on things like YPP and APR? Maybe there is something systemic to his teams that make them under-perform. Or maybe this is all 'noise' and the result of one bad season in a sample size of three. I would think Washington fans would be happy with his teams under-performing in these metrics as long as Washington continues to contend for Pac-12 titles and College Football Playoff appearances. On the other hand, David Shaw and Todd Graham do seem to always have their teams winning more games than we might otherwise suspect based on their per play averages and the amount of touchdowns they score and allow. Many factors influence which teams win football games, but it appears, at least on the surface, that David Shaw and Todd Graham have found something on the margins that allow their teams to win more than we might otherwise expect.
Posted by matt at 5:43 AM