In Part I of this Putlizer-worthy series on the AP Poll, we looked at the preseason poll from the last twelve seasons. This time out, we will examine twelve years’ worth of data on the final AP Poll. The methodology will be the same. The team that finishes ranked first will receive 25 Postseason AP Poll Points (POAPPP, yeah the acronym could probably use some work), the team ranked second will receive 24, and so on until we come to the 25th ranked team which will receive a single point. While the preseason poll is based on expectations and pedigree, the postseason poll is based on performance. Certainly, some biases still exist. A ten-win Texas will probably be ranked ahead of a ten-win Vanderbilt all else being equal, but performance instead of reputation should account for most of the position in the final poll. Once again, only current Power Five teams are included. Without further ado, here are the top ten teams in POAPPP since 2005. 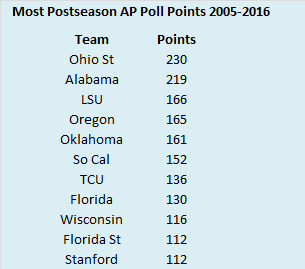 The top spot is a little surprising to me. I expected Alabama to have a stranglehold on the top spot with four championships in the past twelve seasons, but Ohio State’s dependability wins the day. Eight schools have won national titles in the past twelve seasons and five are represented here. Auburn, Clemson, and Texas are the three champs that have not been consistent enough to break into the top ten. TCU, Stanford, and Wisconsin are the lone top-ten teams to have not won or played in the national championship game since 2005.

Unlike the preseason poll, no team has appeared in every iteration of the final poll. Twelve teams have appeared in at least eight editions of the poll. They are listed below, ordered by number of appearances. 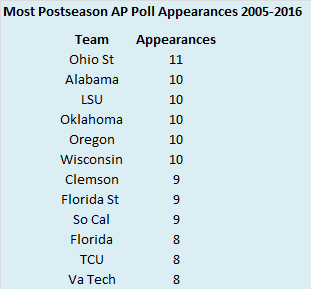 Ohio State missed out on an appearance in the final poll in the bridge year between Jim Tressel and Urban Meyer. They have finished ranked eleven times, with ten of those finishes coming in the top-ten. Alabama, LSU, Oklahoma, and Oregon should not surprise anyone with ten ranked finishes, but Wisconsin showing up with the same amount was shocking to me.

Next, I thought it would be useful to compare the POAPPP by conference. This will tell us which school have had the most success in their respective leagues. We’ll start with the ACC. 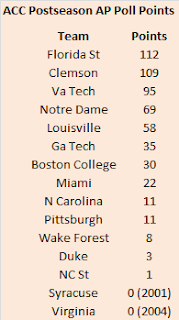 Not much of a surprise at the top of the ACC standings. Florida State and Clemson have won one national title apiece in the last five years, and along with Virginia Tech, those three teams have combined for 15 of the 24 available slots in the twelve ACC Championship Games. Last week, I forgot to include Notre Dame in the rankings since they were the only Independent school. They are listed here for simplicity’s sake. Look how low Miami ranks in this metric. Hail Mary by Doug Flutie aside, Miami should not rank below Boston College over an extended period of time. Syracuse and Virginia have not finished in the final poll in this time period, but they both finished ranked relatively recently. 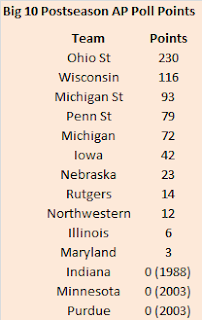 Much like they did with the preseason poll, the Buckeyes have also dominated in postseason achievement. Ohio State has more POAPPP than the second and third place Big 10 teams combined. It’s interesting that Wisconsin and Michigan State occupy second and third in place of more traditional powers Penn State and Michigan. The Nittany Lions and Wolverines appear to back on the upswing, but both have a ways to go to catch Wisconsin. Elsewhere in the rankings, take a look at Nebraska. Somewhere Tommie Frazier is probably rolling over defenders at the thought of the Cornhuskers barely having more POAPPP than Rutgers (keep in mind this does include points Nebraska accumulated while a Big 12 member). Indiana has the distinction of being the lone current Big 10 team to not finish ranked since the turn of the century. 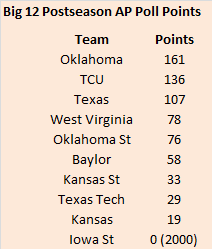 In a bit of an upset, TCU and not Texas, finishes second in the Big 12. In fact, the Horned Frogs are closer to Oklahoma than Texas is them. Toward the bottom of the list, Kansas has only finished ranked once since 2005, but they made the most of their outlier year, finishing seventh. The Jayhawks are the only Power 5 team with just one ranked finish in that time period to end up in the top-ten of the final poll. 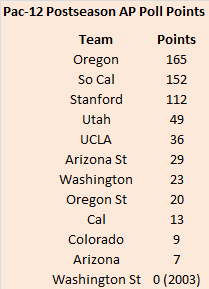 The top of the Pac-12 is not very surprising, but it is interesting that Oregon was able to pass Southern Cal for the top spot. Stanford spotted the rest of the conference a half-decade head start, finishing outside the polls until 2010, but has racked up more than 100 POAPPP over the past seven years. The fact that Utah is ranked fourth is an indictment of the rest of the conference. Utah was a (quality) mid-major for half of the twelve-year time period, but no other mid-level Pac-10/12 squad (UCLA, Arizona State, Washington) managed to eclipse their POAPPP. Washington State finished ranked in the top-ten three consecutive years (2001-2003), but turned to dust just before the time period featured here. 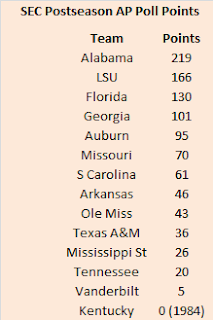 Alabama endured back-to-back 6-6 regular seasons (otherwise known as reasons for celebration at Vanderbilt) in 2006 and 2007, but have otherwise dominated the SEC during this time period. LSU is a distant second with Florida and Georgia also eclipsing the 100 point threshold. This chart shows why Tennessee has had to resort to ‘champions of life’ as they have bested only Vanderbilt and Kentucky in terms of POAPPP since 2005. Speaking of Kentucky, the Wildcats hold the ignominious distinction of being the current Power 5 team that finished ranked longest ago.

Another poll post has come and gone. If you think about it for a second you can probably guess where I’m headed next. That’s right, in the next post we’ll look at which teams have the biggest differences (positive and negative) between their preseason and postseason rankings. Basically, who exceeds expectations and who fails to live up to the hype. You can do the math yourself from the last two posts or wait for me lay it out for you. Either way, thanks for reading. Stay tuned.
Posted by matt at 3:31 AM