In the first two posts on the AP Poll, I looked at the preseason poll and the end of season poll and calculated which teams accrued the most ‘points’ in each over the past twelve seasons. I awarded 25 points for teams ranked first, 24 for teams ranked second, and so on with the 25th ranked team receiving a solitary point. Now comes the next logical step: determining which teams have exceeded expectations the most and which teams have failed to live up to their lofty preseason projections. The methodology is quite simple. Just take the number of Postseason AP Poll Points (POAPPP) each current Power 5 team has accumulated and subtract their Preseason AP Poll Points (PAPPP) from that number. Positive numbers indicate teams that have over-performed and negative numbers indicate teams that have under-performed. So with the methodology out of the way, here are the top ten teams that have over-performed relative to their preseason ranking since 2005. 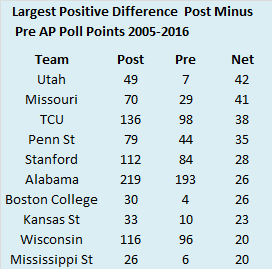 Congratulations Kyle Whittingham. Despite receiving almost no preseason love during his tenure in Salt Lake City (ranked 19th in the 2009 preseason poll), the Utes have racked up 49 points in the postseason AP poll over five ranked finishes. Missouri, with four conference title game appearances since 2005, is a close second and former mid-major TCU ranks third. It is interesting to note that the top three teams in this metric all upgraded to better conferences during this time period. You could have probably guessed most of the remaining teams on this list. For the most part, they are solid programs that are underrated nationally (Boston College, Kansas State, Wisconsin, and Mississippi State) or a non-traditional power that has exploded onto the national scene thanks to some great hires (Stanford). However, it is a bit surprising for Penn State and Alabama to appear here. The Nittany Lions have finished ranked in the top-ten four times in the past twelve seasons (2005, 2008, 2009, and 2016), but in two of those seasons (2005 and 2016) they were not ranked in the preseason poll at all and in another (2008), they were only ranked 22nd in the initial poll. For Alabama, this only serves to further Nick Saban’s legacy. As you may remember from a previous post, Alabama ranks fourth since 2005 in preseason AP Poll points. Yet, they have exceeded even that lofty standard with their final rankings. As we will see in a moment, most other preseason darlings have not been so fortunate. Speaking of, here are the top ten teams in failing to meet their preseason poll expectations since 2005. 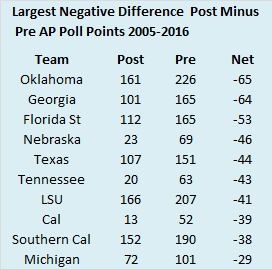 This list features six teams (Oklahoma, Georgia, Florida State, Texas, LSU, and Southern Cal) that were in the top ten of total preseason AP Poll Points, with the recently retired Bob Stoops grabbing the pole position. That makes perfect sense. Teams that receive a large number of preseason points obviously have the most to lose. The teams that should really be shamed by this metric are Cal, Nebraska, and Tennessee. Those three all accrued 69 preseason points or less and still managed to make this list. For comparison’s sake, while Oklahoma lost 65 points from their preseason total, they still managed to hold on to more than 70% of their total points. Meanwhile, Nebraska and Tennessee only held on to about a third of their preseason points and Cal kept only a quarter of theirs. As with the past two posts, we will now examine the difference in POAPPP and PAPPP by conference. We’ll start with the ACC. 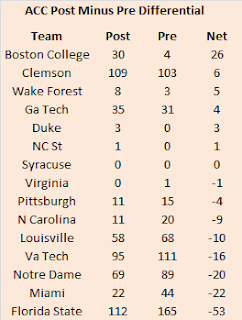 Outside of Boston College, no ACC team drastically exceeded their preseason expectations. And for Boston College, this is a function of three consecutive ranked finishes a decade ago. The Eagles have not finished in the final poll since 2007, but they have only appeared in a single preseason poll (2005). Clemson has done a good job of living up to their relatively lofty preseason expectations. Among teams with at least 100 preseason points, only the Tigers, along with Oregon and Alabama, have a positive differential. The rest of the conference is just not that interesting from an analytical perspective. 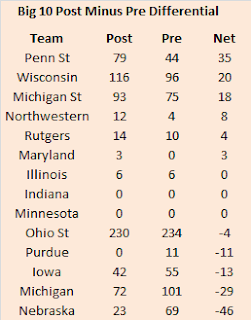 Joining Penn State and Wisconsin as the only Big 10 team with a double-digit positive differential is Michigan State. If I had done this look back prior to their forgettable 2016 campaign, the Spartans would have ranked even higher. Michigan State began last season ranked twelfth and thus lost out on 14 points when they finished 3-9. While Ohio State does have a slight negative differential, they have pretty much finished in line with expectations on average, holding on to more than 98% of their preseason points. 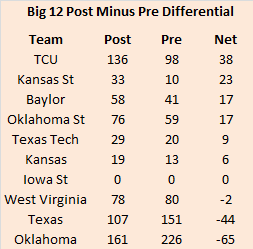 I feel like West Virginia has a reputation for not meeting lofty expectations, but the numbers do not appear to support this claim. This undeserved reputation is most likely due to the 2008 and 2012 seasons when West Virginia began the year ranked eighth and eleventh respectively. The Mountaineers finished near the bottom of the poll in 2008 (23rd) and outside the poll in 2012, but in the other ten years, the West Virginia outpaced their initial standing in the poll. 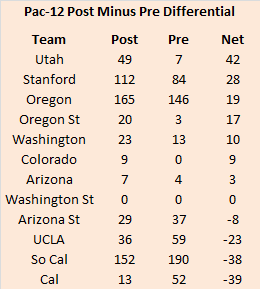 The Pac-12 owns the distinction of being the only conference to have five teams post a double-digit positive differential. Washington State is one of only six teams (Indiana, Iowa State, Kentucky, Minnesota, and Syracuse) to not appear in either the preseason or postseason AP Poll since 2005. 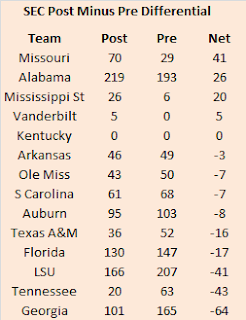 This concludes our look at differences between the preseason and postseason polls. In the next post, I’ll run a regression analysis between team record (Power 5 only) and final poll ranking. I’ll use the resulting formula to rank the most overrated teams of the past twelve seasons and determine which teams probably should have finished ranked. Until next time, thanks for reading.
Posted by matt at 3:29 AM

Can you crunch the numbers to show percentage of points kept or lost? That would make it more comparable for teams that have many preseason points vs those that don't.

First off, thanks for reading. Secondly, I had contemplated doing that in the original post, but decided to just use net points. I am indisposed this weekend, but I will post an addendum early next week using percentages for all P5 teams.