The second conference up in our annual review is the ACC. Here are the ACC standings. 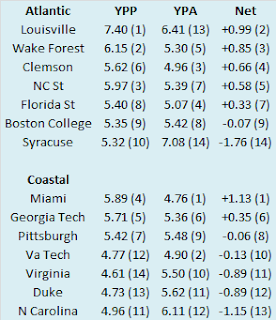 College football teams play either eight or nine conference games. Consequently, their record in such a small sample may not be indicative of their quality of play. A few fortuitous bounces here or there can be the difference between another ho-hum campaign or a special season. Randomness and other factors outside of our perception play a role in determining the standings. It would be fantastic if college football teams played 100 or even 1000 games. Then we could have a better idea about which teams were really the best. Alas, players would miss too much class time, their bodies would be battered beyond recognition, and I would never leave the couch. As it is, we have to make do with the handful of games teams do play. In those games, we can learn a lot from a team’s YPP. Since 2005, I have collected YPP data for every conference. I use conference games only because teams play such divergent non-conference schedules and the teams within a conference tend to be of similar quality. By running a regression analysis between a team’s Net YPP (the difference between their Yards Per Play and Yards Per Play Allowed) and their conference winning percentage, we can see if Net YPP is a decent predictor of a team’s record. Spoiler alert. It is. For the statistically inclined, the correlation coefficient between a team’s Net YPP in conference play and their conference record is around .66. Since Net YPP is a solid predictor of a team’s conference record, we can use it to identify which teams had a significant disparity between their conference record as predicted by Net YPP and their actual conference record. I used a difference of .200 between predicted and actual winning percentage as the threshold for ‘significant’. Why .200? It is a little arbitrary, but .200 corresponds to a difference of 1.6 games over an eight game conference schedule and 1.8 games over a nine game one. Over or under-performing by more than a game and a half in a small sample seems significant to me. In the 2017 season, which teams in the ACC met this threshold? Here are the ACC teams sorted by performance over what would be expected from their Net YPP numbers. 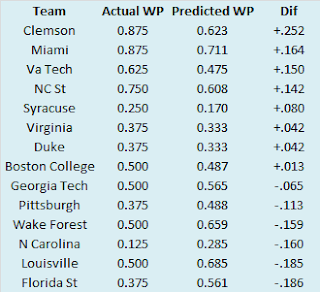 Clemson was the only team to significantly over or under-perform their respective YPP numbers. Clemson's Net YPP of 0.66 was drastically below their 2015 (+2.31) and 2016 (+1.59) numbers, yet the Tigers still managed to win their third straight ACC title and qualify for their third consecutive playoff. How did they do it? You can't blame close games, where the Tigers were 1-1 in conference play. Their in-conference turnover margin of +4 was also not very extreme. The place where Clemson excelled was non-offensive touchdowns. The Tigers scored four in ACC play and did not allow any. Most of those returns also came in crucial situations. The Tigers interception return against Virginia Tech came on a tipped pass in the fourth quarter after the Hokies got the ball back trailing by two touchdowns. That effectively ended the game. Their fumble return against Syracuse came in the second quarter with the Tigers trailing by a touchdown. It tied the game and allowed the Tigers to remain competitive despite their offensive struggles. Finally, their punt return against NC State tied the game early in the first quarter and ended up providing the winning margin in a game that all but wrapped up the division for the Tigers. In addition, outside of Florida State, the Atlantic Division was more competitive overall. This stiffer competition meant Clemson was not able to run up their efficiency margins as they had the previous two seasons.

A few weeks ago, Louisville quarterback Lamar Jackson announced he would be forgoing his senior season and entering the 2018 NFL Draft. Jackson had an illustrious career at Louisville, winning the Heisman Trophy in 2016, finishing as a finalist in 2017, and accounting for 119 touchdowns in less than three full seasons. Regardless of his performance in the NFL, Jackson will be remembered as one of the best college quarterbacks of all-time. However, when reviewing his career at Louisville, I get the feeling the Cardinals did not take full advantage of his talents.

Jackson started 33 games during his time at Louisville. The Cardinals won 22 of his starts. That’s not bad. Any number of schools would certainly ‘settle’ for winning two thirds of their games. However, outside of one historic home game a breakout bowl performance, Louisville never really beat any good teams during Jackson’s tenure. The following table lists the teams Louisville beat in games Jackson started. The table also lists the final record of those teams and their SRS ranking for that particular year. 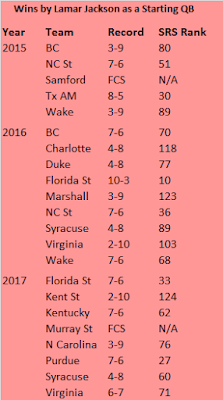 I am not blaming Lamar Jackson for the dearth of Louisville’s team accomplishments. In fact, Jackson deserves great praise for a game that is not listed here. In his freshman season, Jackson began the annual rivalry game with Kentucky on the bench before rallying his team from a 21-0 deficit. If you want to blame someone, try Bobby Petrino. Fault him for not surrounding Jackson with enough talent, particularly on defense and along the offensive line, to take advantage of a transcendent talent.
Posted by matt at 3:32 AM