Last week, we looked at how ACC teams fared in terms of yards per play. This week, we turn our attention to how the season played out in terms of the Adjusted Pythagorean Record, or APR. For an in-depth look at APR, click here. If you didn’t feel like clicking, here is the Reader’s Digest version. APR looks at how well a team scores and prevents touchdowns. Non-offensive touchdowns, field goals, extra points, and safeties are excluded. The ratio of offensive touchdowns to touchdowns allowed is converted into a winning percentage. Pretty simple actually.

Once again, here are the 2017 ACC standings. 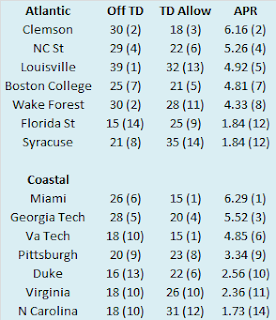 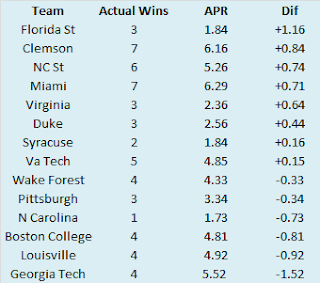 I use a game and a half as a line of demarcation to determine if teams drastically over or under perform their APR. By that standard Georgia Tech was the lone ACC team that saw their record differ significantly from their APR. The Yellow Jackets were a little unlucky in one-score games, going 1-2 in such contests. They also posted a poor, but hardly abysmal in-conference turnover margin of -5. Perhaps the biggest contributor to their bowl-less season was the vagaries of opposing field goal kickers. In ACC play, opponents attempted 17 field goals against Georgia Tech. They made fourteen. 82% is not an otherworldly field goal percentage, but in their three close conference games, Georgia Tech opponents made all eight of their attempts! Those made kicks, especially in the close losses to Miami and Virginia kept the Yellow Jackets home for the holidays for the second time in three seasons.

2017 was a special season for the Clemson Tigers. Despite key losses from their title team, the defending national champions qualified for the College Football Playoff for the third consecutive season and in the process won their third consecutive ACC title. While the playoff is a relatively recent innovation, the ACC has been around for over 60 years, and in that time period, there have only been seven instances of a team winning three consecutive outright ACC titles. 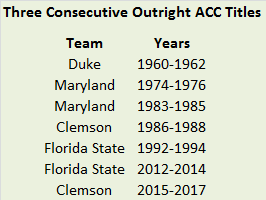 Obviously, the qualifiers to the previous sentence are very important in framing this accomplishment. Florida State won nine consecutive ACC titles from their first year in the conference (1992) through 2000. However, a pair of shared titles in the middle of their run (1995 with Virginia and 1998 with Georgia Tech) prevented them from winning more than three outright titles in a row. Plus, with the addition of the ACC Championship Game in 2005, the conference only crowns an outright champion now instead of the potential for shared titles in the first 50+ years of the conference. Despite those qualifiers, this is still quite an accomplishment and the Tigers will take aim at becoming the first ACC team to ever win four consecutive outright conference titles in 2018.
Posted by matt at 3:29 AM