We head to the heartland of America this week and examine the Big 10. Here are the Big 10 standings. 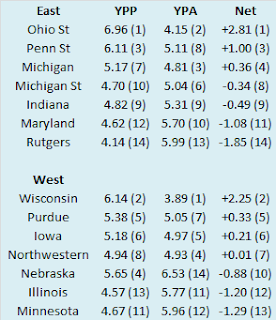 College football teams play either eight or nine conference games. Consequently, their record in such a small sample may not be indicative of their quality of play. A few fortuitous bounces here or there can be the difference between another ho-hum campaign or a special season. Randomness and other factors outside of our perception play a role in determining the standings. It would be fantastic if college football teams played 100 or even 1000 games. Then we could have a better idea about which teams were really the best. Alas, players would miss too much class time, their bodies would be battered beyond recognition, and I would never leave the couch. As it is, we have to make do with the handful of games teams do play. In those games, we can learn a lot from a team’s YPP. Since 2005, I have collected YPP data for every conference. I use conference games only because teams play such divergent non-conference schedules and the teams within a conference tend to be of similar quality. By running a regression analysis between a team’s Net YPP (the difference between their Yards Per Play and Yards Per Play Allowed) and their conference winning percentage, we can see if Net YPP is a decent predictor of a team’s record. Spoiler alert. It is. For the statistically inclined, the correlation coefficient between a team’s Net YPP in conference play and their conference record is around .66. Since Net YPP is a solid predictor of a team’s conference record, we can use it to identify which teams had a significant disparity between their conference record as predicted by Net YPP and their actual conference record. I used a difference of .200 between predicted and actual winning percentage as the threshold for ‘significant’. Why .200? It is a little arbitrary, but .200 corresponds to a difference of 1.6 games over an eight game conference schedule and 1.8 games over a nine game one. Over or under-performing by more than a game and a half in a small sample seems significant to me. In the 2017 season, which teams in the Big 10 met this threshold? Here are Big 10 teams sorted by performance over what would be expected from their Net YPP numbers. 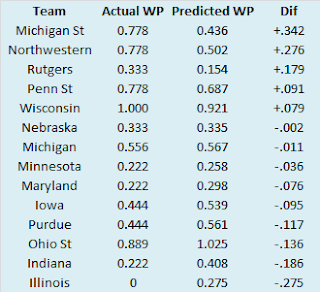 The Big 10 saw three teams finish with records vastly different from their expected records. Michigan State and Northwestern over-performed relative to their expected records while Illinois under-performed. The Spartans and Wildcats rebounded from somewhat (Northwestern) and very (Michigan State) disappointing 2016 campaigns by coming through in the clutch. Michigan State and Northwestern combined to go 8-1 in one-score conference games with the Spartans (5-1) consistently edging their opponents. In fact, the lone close loss between these two came in their October matchup when the Wildcats upset the Spartans in triple overtime. Outside of that game, the teams combined for a perfect 7-0 record in one-score conference games. The Spartans and Wildcats also finished first and second in in-conference turnover margin (+8 for Michigan State and +7 for Northwestern). Meanwhile, Illinois cannot blame close games as only one of their nine conference defeats came by fewer than ten points. The Illini did finish last in in-conference turnover margin (-7), and as we will soon see, they are no stranger to under-performing their peripherals. 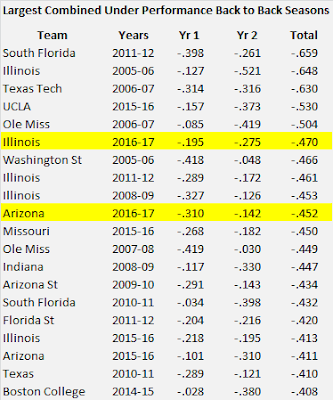 Since 2005, twenty teams have under-performed by at least .400 over two consecutive seasons and Illinois has accounted for a quarter of those instances! Arizona and South Florida are the only other schools with multiple appearances (remember South Florida was in a BCS conference during this time period) and both are here primarily on the strength of one horrendous season bookended by other slightly below average seasons. Meanwhile, the Illini have done this multiple times under four different head coaches!

Alright, so the Illini have a penchant for under-performing, but what can we expect going forward? Are the Illini due for an incredible rebound? Excluding the current Illinois and Arizona teams, I looked at how the other 18 teams performed in the year immediately following their two consecutive years of under-performance. I compared this to the average conference record the team put together in the under-performing years and calculated the difference. The results are summarized below chronologically. 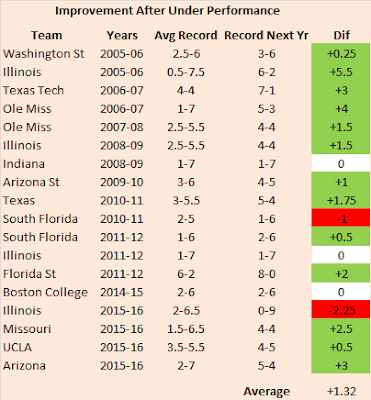 Illinois fans can take heart from this exercise. 13 teams improved their conference win total from the average of the previous two seasons, three saw no changes, and only two declined. The average improvement was by about one and a third games. Illinois has averaged one conference win over the previous two seasons (2-7 in 2016 and 0-9 in 2017), so I would set expectations at around two and a half conference wins in 2018. I don’t know how the Lovie Smith hire will work out in the long run (it seemed pretty unimaginative at the time), but if Smith doesn’t manage at least three conference wins in 2018, I would be inclined to fire him and start over
Posted by matt at 3:30 AM