Last week, we looked at how Big 10 teams fared in terms of yards per play. This week, we turn our attention to how the season played out in terms of the Adjusted Pythagorean Record, or APR. For an in-depth look at APR, click here. If you didn’t feel like clicking, here is the Reader’s Digest version. APR looks at how well a team scores and prevents touchdowns. Non-offensive touchdowns, field goals, extra points, and safeties are excluded. The ratio of offensive touchdowns to touchdowns allowed is converted into a winning percentage. Pretty simple actually. 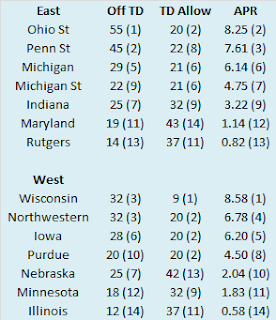 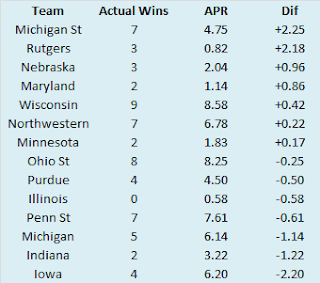 I use a game and a half as a line of demarcation to determine if teams drastically over or under perform their APR. By that standard Michigan State and Rutgers exceeded their APR while Iowa fell short. Last week, I touched on why Michigan State was able to win seven of their nine conference games despite middling peripherals, but I’ll once again highlight their 5-1 record in one-score conference games. Rutgers was 2-0 in one-score conference games, but the reason their APR is so low is due to the other seven conference games, in particular, their six losses. Rutgers' three conference wins came by a combined 20 points. Five of their six conference losses came by more than that. Their ten point loss to Nebraska represented their best performance in a losing effort. Their average margin of defeat in the other five games was 36 points! Consistently getting blown out will tramp down your APR. Finally, Iowa's APR score is due to a confluence of factors. Their inexplicable performance against Ohio State somewhat inflates their season numbers, but the Hawkeyes were also a slightly unlucky 1-3 in one-score conference games. Change a few plays here or there, especially in the Penn State or Northwestern games and Iowa’s record is much closer to their APR.

Once you become an adult, it’s no secret that life comes at you fast. One minute the president is an erudite, well-spoken intellectual capable of making you believe anything is possible. The next minute he’s a racist, septuagenarian. But I digress. I mention that because Urban Meyer has now coached more games at Ohio State than he did at Florida. I know. I’ll give you a second to collect yourself after that bombshell. What’s even more amazing is how well his Ohio State teams have performed in the clutch. The following table lists each Big 10 team’s record in one-score conference games since Meyer’s arrival in 2012. 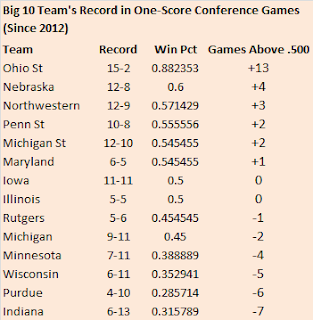 The table is sorted by games above .500 instead of winning percentage to give you an idea of just how much Ohio State has owned close games. Ohio State’s margin of +13 is greater than the cumulative margin of the other five teams that have managed a winning record in close games (+12). In fact, if you think hard enough, you can probably recall the two instances in which Ohio State came out on the short end of a close game (this does not include Big Championship Games where Ohio State is 1-1 in close games). If close games are indeed a 50/50 proposition, then the chances of one team winning 15 of 17 is roughly 1 in 964.

As a comparison, how did Meyer do in close games at Florida? I’m glad you asked. 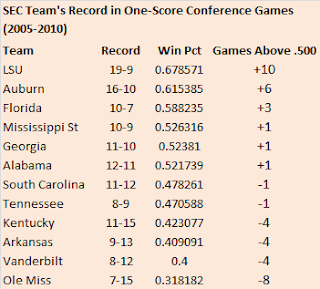 His Florida teams were not nearly as dominant (Les Miles, Tommy Tuberville, and Gene Chizik must have all had a rabbit’s foot), but the Gators still won more than they lost over a decent sample size. Meyer’s teams win close games at a rate that suggests it is more than just random chance. I wouldn’t expect his teams to continue winning close games at a nearly 90% clip, but the Buckeyes should continue to perform well in close games for the duration of Meyer’s tenure.
Posted by matt at 3:30 AM