Eight conferences down, just two to go. This week we move cross country from the west coast to the southeast. Next up is the SEC. Here are the 2017 SEC standings. 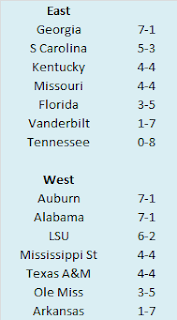 So we know what each team achieved, but how did they perform? To answer that, here are the Yards Per Play (YPP), Yards Per Play Allowed (YPA) and Net Yards Per Play (Net) numbers for each SEC team. This includes conference play only, championship game excluded. The teams are sorted by division by Net YPP with conference rank in parentheses. 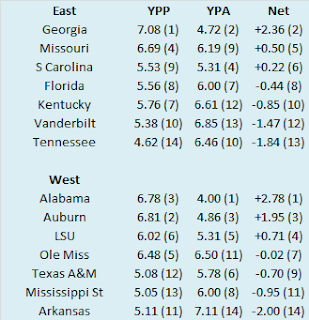 College football teams play either eight or nine conference games. Consequently, their record in such a small sample may not be indicative of their quality of play. A few fortuitous bounces here or there can be the difference between another ho-hum campaign or a special season. Randomness and other factors outside of our perception play a role in determining the standings. It would be fantastic if college football teams played 100 or even 1000 games. Then we could have a better idea about which teams were really the best. Alas, players would miss too much class time, their bodies would be battered beyond recognition, and I would never leave the couch. As it is, we have to make do with the handful of games teams do play. In those games, we can learn a lot from a team’s YPP. Since 2005, I have collected YPP data for every conference. I use conference games only because teams play such divergent non-conference schedules and the teams within a conference tend to be of similar quality. By running a regression analysis between a team’s Net YPP (the difference between their Yards Per Play and Yards Per Play Allowed) and their conference winning percentage, we can see if Net YPP is a decent predictor of a team’s record. Spoiler alert. It is. For the statistically inclined, the correlation coefficient between a team’s Net YPP in conference play and their conference record is around .66. Since Net YPP is a solid predictor of a team’s conference record, we can use it to identify which teams had a significant disparity between their conference record as predicted by Net YPP and their actual conference record. I used a difference of .200 between predicted and actual winning percentage as the threshold for ‘significant’. Why .200? It is a little arbitrary, but .200 corresponds to a difference of 1.6 games over an eight game conference schedule and 1.8 games over a nine game one. Over or under-performing by more than a game and a half in a small sample seems significant to me. In the 2017 season, which teams in the SEC met this threshold? Here are SEC teams sorted by performance over what would be expected from their Net YPP numbers. 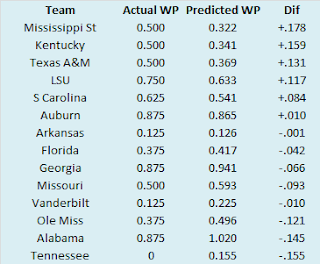 No SEC teams significantly over or under-performed relative to their expected record based on YPP. The top three teams dominated the conference, finishing a combined 21-3 with Auburn’s loss to LSU the only one coming against the other eleven. There is really nothing interesting or new to report in that regard. So, instead I’ll focus on something that is rather interesting.

When Jim McElwain was relieved of his duties in late October, I realized no current coach in the SEC East at that point had ever won the division! In fact, the last three head coaches to win the division (McElwain, Pinkel, and Richt) had all departed within three seasons of winning the division! Is this standard practice in the SEC? To find out, I looked at all SEC coaches that have won division titles since the league expanded in 1992. I then calculated how many seasons they coached at their school after their most recent title. For example, Steve Spurrier won pretty much every SEC East title in the 90’s at Florida, but his most recent title with the Gators came in 2000. He coached just one additional season at Florida before resigning to become head coach of the Washington Redskins. Obviously, Spurrier was not forced out at Florida, but I still wanted to get an idea of how long each coach lasted after their last division title. I rounded partial seasons up, so Jim McElwain gets credit for one full season and Les Miles get credit for five even though they did not finish out their final campaigns. The following table lists the SEC division winning coaches who are no longer employed by the schools where they won titles. I have highlighted coaches who were removed for performance based reasons to differentiate those from coaches who moved on voluntarily. We can quibble with a few of those distinctions, but for the most part, I think they are accurate. 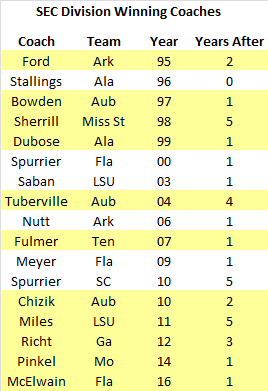 Those 17 head coaches combined to coach for 35 seasons after their most recent division title. It doesn’t take an abacus to calculate that is an average of just over two seasons. Ten of the 17 coaches lasted one season or less with Les Miles and Jackie Sherrill surviving the longest (five seasons) after their last division title. When we remove the coaches who left voluntarily or for reasons other than performance, the numbers look a little better. Those eleven coaches lasted a total of 26 seasons with five lasting one season or less.

Examining the SEC in a vacuum allows us to gleam a little information, but a comparison is what we really want. Are SEC coaches on a much shorter leash? To answer that, we need to look at the other Power Five conferences. The SEC had a decade or more head start on every other major conference except the Big 12, and the Big 12 ended divisional play eight seasons ago, so I have decided to lump the other four conferences together. Once again, I have included all division title winning coaches while highlighting those that were fired or forced out for performance-based reasons. 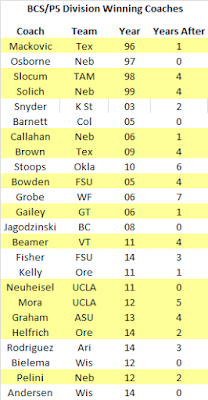 Overall, coaches in other conferences lasted longer. These 24 coaches remained employed a combined 58 years after their most recent division title. This is roughly 2.4 seasons versus 2.1 for SEC coaches. In addition, ten of those 24 coaches lasted one season or fewer. Recall this is equal to the number of short-tenured coaches from the SEC albeit with a much higher denominator. Once we remove those coaches who were not fired for performance, the numbers get better. Those 13 fired coaches lasted a total of 36 seasons which is 2.8 seasons on average versus 2.4 for fired SEC coaches and less than a quarter of the fired coaches (four of 13) lasted one season or less.

It does appear life is tougher for coaches in the SEC, at least in regards to longevity. Winning a division title doesn’t buy you a lot of time. Of course, the compensation, on par with the GDP of some Central American countries and the guaranteed contracts that are the envy of NBA players helps keep the fired coaches above the poverty line.
Posted by matt at 5:30 AM