The Evolution of Heisman Winning Quarterbacks Part I: Passing

The Heisman Trophy is perhaps the most prestigious ‘amateur’ award in sports with a rich history and unrivaled pageantry. It ostensibly goes to the best player in college football, but could more accurately be described as going to the best backfield player in college football. No non-back has won the award since Charles Woodson in 1997 and no wide receiver has won it since Desmond Howard in 1991. While the award was egalitarian among backs in the 90’s, with quarterbacks and running backs each winning four times in the decade, signal callers have gained a stranglehold on the award since the turn of the century. Beginning with middle-aged Chris Weinke in 2000, fifteen of the last eighteen winners (and yes, around here Reggie Bush is still considered a Heisman winner) have been quarterbacks. Since the Heisman is almost exclusively a quarterback award, and since we still have seven weeks or so until the season kicks off, I decided to look at the last twenty Heisman winning quarterbacks (beginning with Andre Ware in 1989) and compare their statistics in several categories. Obviously, the game has changed a great deal since Ware hoisted the award in December of 1989, not only with schemes and tactics, but also with television and streaming services, as well as our understanding of the game. As the title of this post suggests, this is part one in a multi-part series. I wanted to look at a number of different statistics for Heisman winners and decided to break those stats into digestible pieces. We’ll start with some passing statistics for Heisman winning quarterbacks and next week, we’ll dive into rushing and total offense stats. For each stat, the twenty quarterbacks will be ranked and the average (mean) will be included to give you an idea of how far above or below average each quarterback ranks. This next paragraph deals with some housekeeping information, so if you want the meat of the article skip down.

First and foremost, the statistics we will be examining are raw. No, there is (virtually) no risk for salmonella, but these stats are not adjusted for opponent nor era, and they are not calculated on a per game basis. Bowl and playoff statistics are not included because those games happen after the Heisman Trophy is awarded. With that out of the way, let’s get started with our first statistic: pass attempts. 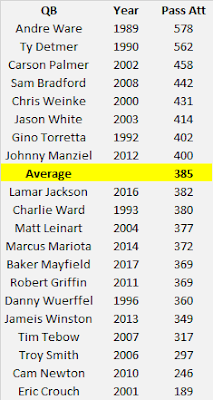 I know I said in the intro that the game has changed a great deal since Ware hoisted the trophy, but its cool to see him top this list in terms of volume of pass attempts. This shows you have far ahead of the curve Houston and BYU were in terms of utilizing the forward pass in the late 80s and how crazy it probably seemed to ‘real’ football coaches who preferred to run the ball into the line three times and then punt. Most of the other Heisman winners from the 90s all rank below average in this metric although Gino Torretta surprisingly shouldered a lot of Miami’s offense in 1992. Spoiler alert: Eric Crouch will rank at or near the bottom in every passing measure. He was a different kind of quarterback in a different offensive system, but his numbers look more like a Big 8 quarterback from the 80s than any of his Heisman winning contemporaries.

Next up is completion percentage. 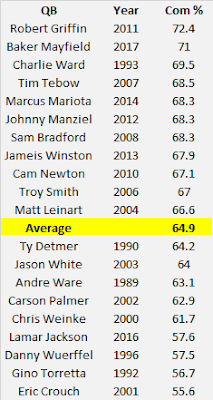 Next up is total passing yards. 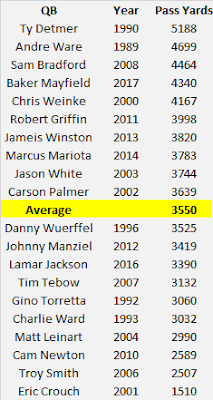 Ty Detmer is the only Heisman winner to top 5000 passing yards in a single season. In fact, his total is more than the combined passing yardage of the two lowest ranked players in this metric. Once again Detmer and Ware were ahead of their time (or at least played in systems that were ahead of their time), as they topped the Heisman winning average by over 1000 yards each.

Next up is passing touchdowns. 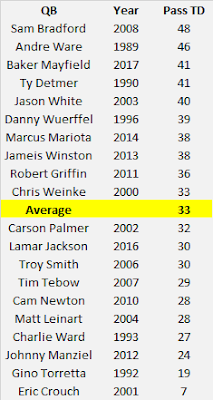 I already touched on how Eric Crouch would populate the bottom of these passing stats, but look at Gino Torretta. Those 19 touchdowns seem more indicative of a third team All-Big East quarterback rather than a Heisman winner. And while we’re talking about Torretta, I decided to sort the Heisman winners by their passing touchdown percentage. 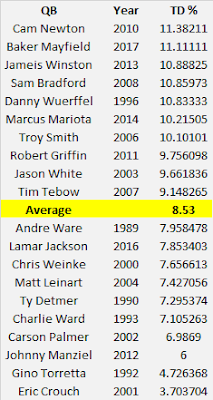 Next up is interceptions. Haha. Look at that number for Ty Detmer. 28. That is comical. His performance pretty much destroys the curve. He threw more than three times the number of interceptions as the average Heisman winner. As you can observe from the bottom of the list, passing has gotten much safer in the last ten years. Jameis Winston is the only Heisman winner since 2003 to hit double digits in interceptions. Conversely, Charlie Ward and Gino Torretta were the only Heisman winners prior to 2003 to throw fewer than ten interceptions. And while I denigrated Torretta for his low touchdown percentage a few moments ago, we need to give him credit for being careful with the ball and not squandering any of that South Beach talent he had around him with dangerous throws. 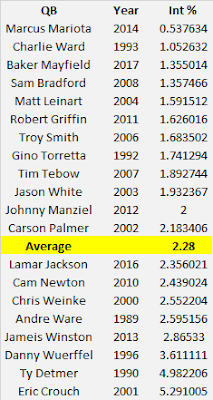 Charlie Ward also continues to shine in efficiency metrics as his interception percentage is topped only by Marcus Mariota’s minuscule mistakes in 2014.

Next up is touchdown to interception ratio. 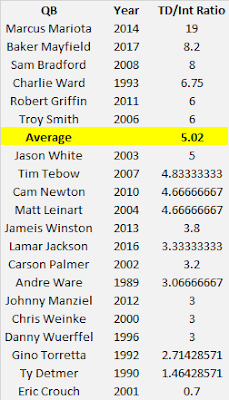 Obviously, if you only throw two interceptions all season, you should rate highly in this area. Mariota’s ratio is more than double that of silver medalist Baker Mayfield. I know you may be getting tired of this refrain, but Charlie Ward again stands out as the only 90s winner with an above average ranking in this metric.

Next up is touchdown to interception net. 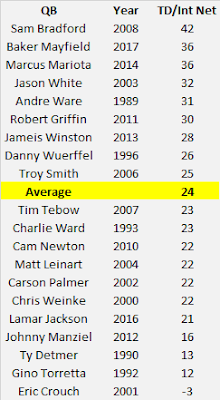 If you like basic math, but don’t care for any of that fancy division, this stat is for you. Instead of dividing touchdowns by interceptions, we are instead subtracting interceptions from touchdowns. A pair of Oklahoma quarterbacks are able to steal the crown from Mariota here, while legacy touchdown passers like Andre Ware and Danny Wuerffel move from below to above average.

Finally, our last statistic is Adjusted Yards per Pass Attempt. It does involve a formula, but its pretty simple. You take yards per pass attempt and award a 20 yard bonus for each touchdown and subtract a 45 yard penalty for each interception. 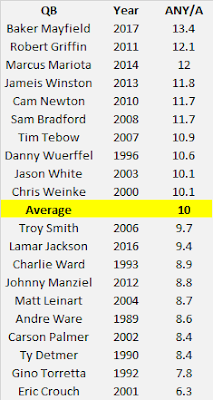 Mayfield’s 2017 campaign is far and away the best AY/A season by a Heisman winner. For comparison, the difference between Mayfield’s AY/A and that of second place Robert Griffin is roughly the same as the difference between Griffin and eighth place Danny Wuerffel. Speaking of Wuerffel, he is the only 90s quarterback to rank above average in this metric. The bottom of this ranking is populated with the usual suspects (Crouch and Torretta), but other polished passers with great supporting casts at a selective, private, west coast institution also rate pretty low here (Leinart and Palmer).

This concludes part I of our look at Heisman winning quarterbacks. When we return next week, we’ll look at how these 20 gentlemen rate in several rushing and combined statistics. Then we’ll summarize the results and see which quarterbacks consistently rated above and below average and maybe even hand out some superlatives. See you next week.
Posted by matt at 3:26 AM