Another Summer of Polls Part III: The Most Under-Rated Teams (Since 2005)

Last week, in our ongoing look at the AP Poll, we looked at teams the pollsters probably over-rated. This week, we are going to look at teams that the pollsters under-rated. I know, you are thinking we already did that. However, in this instance, the pollsters managed to rate these teams (i.e. they finished ranked), but they should have rated them higher. Once again the numbers we will be comparing are the final rankings from the AP Poll and the SRS rankings. For a primer on SRS, follow this link.

Since 2005, which teams have seen the biggest disparity between their SRS ranking and their final AP ranking? Glad you asked. The top-ten are listed below. 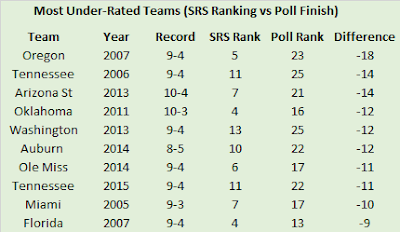 Congratulations to Oregon. Mike Bellotti’s penultimate teams ranks as the most under-rated since 2005. As you may recall, the Ducks were ranked second in the country and perhaps on course to play for the national title before an injury to star quarterback Dennis Dixon devastated their offense and contributed to them losing their final three regular season games. The Ducks did rebound to win the Sun Bowl, but their final ranking near the bottom of the AP Poll belied their strong statistical resume.

What do these under-rated teams all have in common? For starters, they all came from BCS/Power 5 conferences. Half of the top-ten came from the SEC and eight of the top-ten came from either the SEC or Pac-10/12. Every team also lost at least three games. Intuitively, this makes sense. If a Power 5 team loses two or fewer games, they will probably finish pretty close to the top-ten and not be capable of being under-rated by this methodology. In addition, six of the ten teams lost their bowl game. For the most part, losses cause teams to drop in the polls, so those teams had their otherwise solid seasons end on sour notes. This is especially true for a pair of Peach/Chick Fil-A Bowl losers, Miami and Ole Miss. The Hurricanes and Rebels were decimated in their bowl losses to LSU and TCU respectively, so the final image any pollster had of those two teams was not positive. Finally, every team on this list save Arizona State failed to win their conference or division. In several cases (Tennessee 2006, Florida 2007, Oklahoma 2011, Auburn 2014, and Ole Miss 2014) this meant there was a national title contender directly adjacent in the conference standings. And in Arizona State’s case, while the Sun Devils managed to win their division, they lost in the conference title game and were then upset in their bowl game. This two-game skid severely impacted their final ranking.

That concludes another summer of polls. Next week, we'll take a look at how Heisman quarterbacks have evolved over the last 30 years or so. Stay tuned.
Posted by matt at 9:36 AM