Last week we looked at how ACC teams fared in terms of yards per play. This week, we turn our attention to how the season played out in terms of the Adjusted Pythagorean Record, or APR. For an in-depth look at APR, click here. If you didn’t feel like clicking, here is the Reader’s Digest version. APR looks at how well a team scores and prevents touchdowns. Non-offensive touchdowns, field goals, extra points, and safeties are excluded. The ratio of offensive touchdowns to touchdowns allowed is converted into a winning percentage. Pretty simple actually.

Once again, here are the 2018 ACC standings. 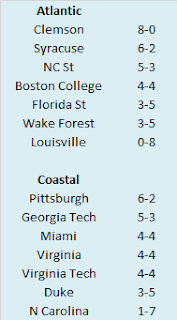 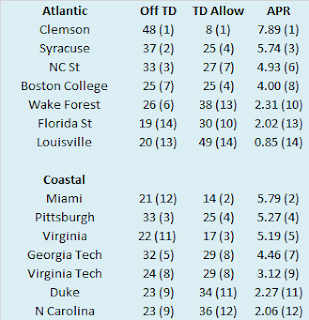 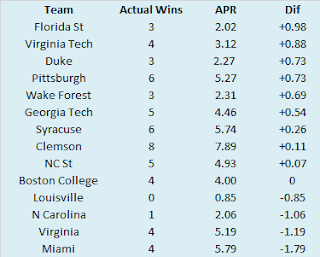 I use a game and a half as a line of demarcation to determine if teams drastically over or under perform their APR. By that standard Miami was the only team that saw their actual record significantly diverge from their APR. The Hurricanes undershot their expected record because three of their four conference losses came by one score while three of their four conference wins came by at least 21 points. They wasted a fine defensive performance (second to Clemson in touchdowns allowed) as the offense was unable to consistently punch the ball in the endzone (only Louisville and Florida State scored fewer touchdowns).

How Dominant was Clemson in 2018?
A little less than four weeks ago, Clemson won their second national title in the past three seasons (and third overall). The Tigers dominated (on the scoreboard if not in the box score) an Alabama team that many thought might be one of the best of all-time. Clemson was touted as one of the best teams in the nation all season, but with the Tide sucking most of the oxygen out of the college football ecosystem, I feel like most casual football fans didn’t realize how dominant Clemson was this (I know I didn’t realize it until I was crunching the numbers for bowl season). The Tigers did survive a few tight games in 2018, edging Texas A&M in College Station and rallying to beat their Orange adversaries in Death Valley. However, those games share a common thread: quarterback Trevor Lawrence did not both start and finish them. In games Lawrence both started and finished, the Tigers won by an average of 36 points per game, with no team coming closer than twenty points! Scoring margin is one estimator of team strength, but since I have YPP and APR data going back to 2005, I decided to see where Clemson ranked in those categories compared to the other thirteen national champions in that span. Let’s start with YPP. 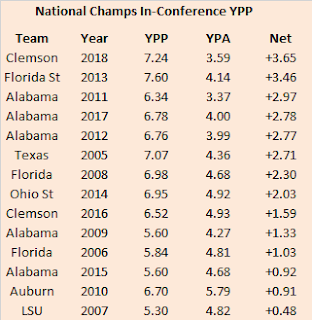 Using YPP, Clemson was the most dominant national champion since 2005. In that time frame, only 29 power conference teams (BCS or Power 5) have averaged at least seven yards per play against their conference opponents. Only 14 have allowed fewer than four yards per play to their conference opponents. Clemson is one of only two teams to do both. The other was Florida State in 2012 (the year before they won the national title). So Clemson ranks quite well using YPP. What about APR? 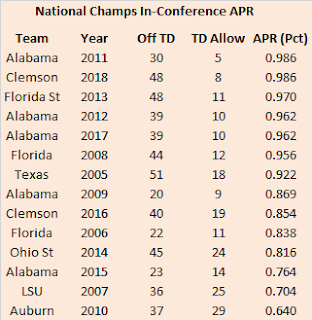 After ranking first in YPP, Clemson drops all the way to…tied for first in APR (notice I used APR as a win percentage to account for potential differences in number of conference games). The Tigers scored six times as many touchdowns as they allowed in conference play, tying them with a dominant national champion that didn’t even win their conference.

The ACC was mediocre at best in 2018, but Clemson thoroughly dominated it, and with their non-conference performance (victories against two SEC bowl teams as well as a solid Sun Belt squad) and subsequent playoff thrashing of two unbeaten heavyweights, the Tigers can make a case they are the best national champion of the new century. A significant portion of the population in the city where I live probably won't like it, but Orange might be the new black (shirt).
Posted by matt at 3:28 AM