College football season always passes by so fast. It seems like just yesterday I was lounging on the sofa enjoying some Week Zero action. And now we have no college football for nearly eight months. Don’t worry though, we’ll get through this together. This post begins our offseason sojourn through each of the ten FBS conferences. We’ll examine each conference in terms of Yards per Play (YPP yeah you know me) and the Adjusted Pythagorean Record (APR). Don’t know that those two acronyms mean? Read on to find out. We start as always, with the American Athletic Conference. 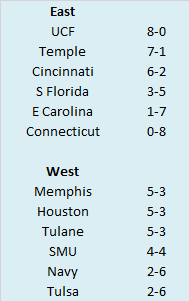 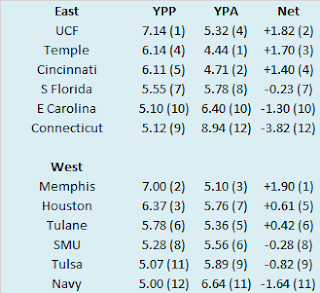 College football teams play either eight or nine conference games. Consequently, their record in such a small sample may not be indicative of their quality of play. A few fortuitous bounces here or there can be the difference between another ho-hum campaign or a special season. Randomness and other factors outside of our perception play a role in determining the standings. It would be fantastic if college football teams played 100 or even 1000 games. Then we could have a better idea about which teams were really the best. Alas, players would miss too much class time, their bodies would be battered beyond recognition, and I would never leave the couch. As it is, we have to make do with the handful of games teams do play. In those games, we can learn a lot from a team’s YPP. Since 2005, I have collected YPP data for every conference. I use conference games only because teams play such divergent non-conference schedules and the teams within a conference tend to be of similar quality. By running a regression analysis between a team’s Net YPP (the difference between their Yards Per Play and Yards Per Play Allowed) and their conference winning percentage, we can see if Net YPP is a decent predictor of a team’s record. Spoiler alert. It is. For the statistically inclined, the correlation coefficient between a team’s Net YPP in conference play and their conference record is around .66. Since Net YPP is a solid predictor of a team’s conference record, we can use it to identify which teams had a significant disparity between their conference record as predicted by Net YPP and their actual conference record. I used a difference of .200 between predicted and actual winning percentage as the threshold for ‘significant’. Why .200? It is a little arbitrary, but .200 corresponds to a difference of 1.6 games over an eight game conference schedule and 1.8 games over a nine game one. Over or under-performing by more than a game and a half in a small sample seems significant to me. In the 2018 season, which teams in the American Athletic Conference met this threshold? Here are AAC teams sorted by performance over what would be expected from their Net YPP numbers. 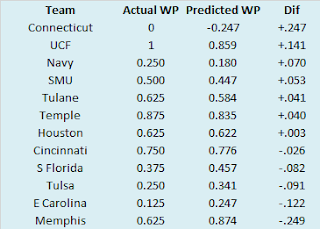 Memphis was the lone AAC team to under-perform relative to their YPP numbers. The Tigers actually bested Central Florida in terms of YPP, although they were not able to do so on the field. How did the Tigers lose three times despite such pristine numbers? As is usually the case, you can blame close games. The Tigers dropped a pair of one-point decisions in conference play, including the aforementioned defeat to Central Florida. In their other one-point loss (to Navy), the Tigers outgained the Midshipmen by nearly four yards per play, but were done in by untimely turnovers and an inability to finish drives. On the other end of the spectrum, despite not registering a single conference win, Connecticut actually exceeded their expected record (by a significant amount) based on YPP. The Huskies were so bad defensively (more on that next week), they actually break the regression analysis and should have won about negative two games instead of zero.

In these weekly posts, this is where I take a deeper dive into the statistical minutia of the conference. However, I noticed over the previous offseasons that I just sort of shifted gears into the next topic. No more. We are professionals here on this nearly fourteen year old blogspot account. And there will be headings!

Bettor Beware!
This may have gone unnoticed by you over the bowl season, but I caught it since the team I root for (Wake Forest) was involved. Four ACC teams played in bowl games where they were betting underdogs to Group of Five teams. Obviously, this probably says a lot about the quality of the ACC in 2018, national champ notwithstanding. Three of those ACC teams were underdogs to teams from the AAC. All three of the ACC teams covered and two won outright (the other ACC team had their game canceled). Is the 2018 postseason an isolated incident or are Group of Five teams a bad bet when they are favored against Power Five teams in bowl games? Let’s investigate!

Beginning with the 2005 season, I looked at all bowl games where a non-BCS or Group of Five team was a betting favorite against a BCS or Power Five team. It should go without saying, but the team labels are time sensitive. In other words, while TCU is currently a member of the Big 12, in 2005, when they played Iowa State in the Houston Bowl, they were members of the Mountain West Conference and are included in the analysis. Similarly, their Rose Bowl classic with Wisconsin is also included here (TCU won both games, but pushed against the Cyclones and failed to cover against Wisconsin).

So how did those ‘mid-majors’ do when matching up as a favorite against ‘major’ conference opponents? Since 2005, mid-majors have been favored 29 times against major conference opponents. Overall, they have done well, winning 18 of those 29 contests straight up. However, their Against the Spread (ATS) record is another issue. Mid-majors are just 11-17-1 ATS. The following table breaks the numbers down chronologically with an obvious arbitrary separation. 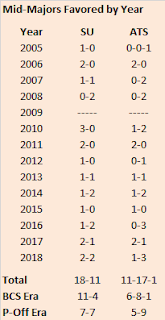 Hopefully your small sample alert siren blared when looking at the BCS versus playoff era records, but real or not, mid-majors have struggled to win those games outright since the dawning off the College Football Playoff in 2014. This will bear watching in the coming years.

It does appear that Group of Five teams might not be the ideal choice to back in bowl season when they are favored against Power Five teams. Why might this be so? I have a few theories.

Those are just a few thoughts I had as to why G5 teams have struggled when favored in bowl games against P5 teams. If you have any thoughts, please drop them in the Comments section.

Finally, I apologize for the delay in this post, as I was under the weather last week. However, your patience will be rewarded as there will be two posts this week. The APR AAC post will be up on Thursday and barring any health challenges, posts will resume on a weekly basis every Thursday. Thanks for reading.
Posted by matt at 3:30 PM