Last week we looked at how Big 10 teams fared in terms of yards per play. This week, we turn our attention to how the season played out in terms of the Adjusted Pythagorean Record, or APR. For an in-depth look at APR, click here. If you didn’t feel like clicking, here is the Reader’s Digest version. APR looks at how well a team scores and prevents touchdowns. Non-offensive touchdowns, field goals, extra points, and safeties are excluded. The ratio of offensive touchdowns to touchdowns allowed is converted into a winning percentage. Pretty simple actually. 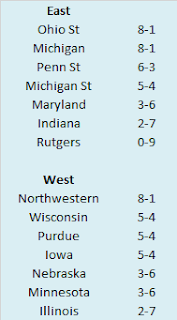 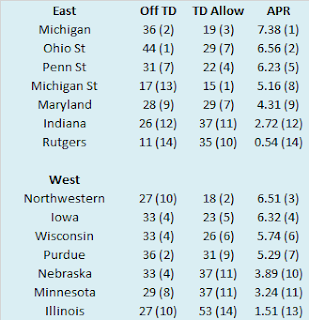 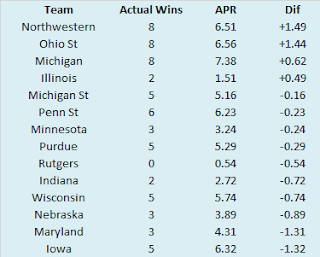 Northwestern and Ohio State nearly met the game and a half threshold that I use for determining if a team significantly over or under-performed relative to their APR. Those two teams did meet the YPP standard and we went over why last week, so I won't bore you with rehashing that this week.

Whither the Preseason Top-Ten Teams that Finish Unranked?
For the first time since 2012 and just the third time since 2003, Wisconsin finished the 2018 season unranked. This feat was doubly notable since the Badgers began the season in the top-five (they were fourth). A lot of Power Five teams would kill (or more accurately cheat like hell for an 8-5 record and bowl win). However, based on preseason expectations, 2018 qualifies as a disappointment for Wisconsin fans. What then should Wisconsin fans expect in 2019? Are the Badgers likely to rebound? To answer that question, I looked at all preseason top-ten teams (in the AP Poll) that finished unranked since 2005. Besides the three teams that ‘accomplished’ this feat in 2018 (Auburn and Miami joined Wisconsin as unranked finishers despite preseason top-ten rankings), 23 other teams began the season in the top-ten and finished outside the final polls. Those teams along with their follow up (regular season) records are summarized chronologically in the following table. 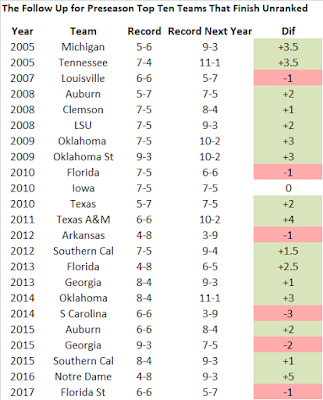 In the aggregate, those top-ten teams that finish unranked tend to rebound the following season. Of the 23 previous top-ten teams to finish unranked, only seven failed to see their win total improve the following season. In addition, four of those seven teams experienced coaching changes (Florida, Arkansas, Georgia, and Florida State) so that may partially explain why they did not improve. When we break things down further, this is how those 23 teams fared on average in their follow up season.

Chances are at least two of the three preseason top-ten teams that finished unranked from last season will rebound in 2019, and seeing all three rebound wouldn’t be that shocking.

Were I forced to choose two, I would take Auburn and Wisconsin to rebound. Auburn always seems to zig when the preseason consensus says they will zag and Wisconsin has been one of the most consistent programs in the nation over the past two decades. Miami could certainly rebound as well, but I don’t feel quite as confident in the Hurricanes since their offense looked lost at the end of 2018 and they are going through a coaching change which is one of the common traits in most of the teams that did not improve. While each season is viewed in hindsight as preordained, the reality is the small sample size of college football can produce highly variable results. Pollsters tend to do a solid job of evaluating teams in the preseason, so even if a team disappoints record-wise, their underlying talent is probably closer to where the preseason polls rated them.
Posted by matt at 3:25 AM