Last week we looked at how Big 12 teams fared in terms of yards per play. This week, we turn our attention to how the season played out in terms of the Adjusted Pythagorean Record, or APR. For an in-depth look at APR, click here. If you didn’t feel like clicking, here is the Reader’s Digest version. APR looks at how well a team scores and prevents touchdowns. Non-offensive touchdowns, field goals, extra points, and safeties are excluded. The ratio of offensive touchdowns to touchdowns allowed is converted into a winning percentage. Pretty simple actually. 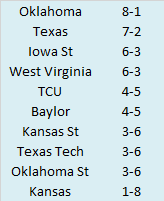 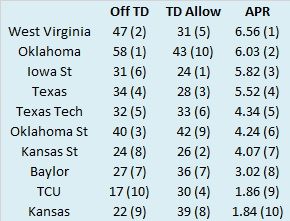 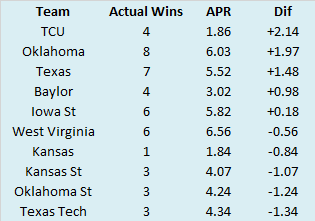 Using one and a half games as a benchmark for under or over-performing relative to APR, TCU and Oklahoma were the Big 12 teams that significantly exceeded their expected record in 2018. Texas almost hit the mark and they were the lone team to significantly exceed their expected record based on YPP. We touched on a few reasons why last week, so I won't rehash that here. For TCU and Oklahoma, their problems were on opposite sides of the ball. TCU, as they always do under Gary Patterson, had an above-average Big 12 defense, but the worst offense (touchdown-wise) in the conference. Meanwhile, Oklahoma moved the ball at will, but could not stop anyone, scoring and allowing the most touchdowns in Big 12 play. Both teams were able to exceed their APR thanks to solid records in close games. TCU went 4-2 in one score-conference games while Oklahoma was 3-1 in such contests.

The Hrned Frgs Lost Their 'O'
I had to look twice while calculating the Big 12 APR data to make sure I hadn’t made a mistake. I could not believe that TCU ranked ninth in the conference and just ahead of lowly Kansas. But, as usual, my math checked out and if you watched any of the Cheez-It Bowl, you know why TCU ranked so low. The Horned Frogs scored just seventeen offensive touchdowns in Big 12 play. That means they averaged less than two offensive touchdowns per game over the course of their conference campaign. The Big 12 has a reputation as a defense optional conference so, how bad was TCU’s offensive performance in a historical Big 12 context? Glad you asked. The table below lists every Big 12 offense that averaged two or less offensive touchdowns per game in conference play since 2005. Spoiler alert: You’ll find a lot of Kansas entries on this list. 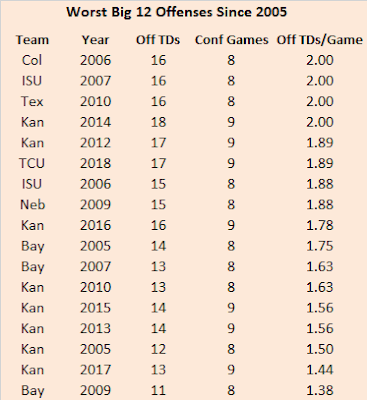 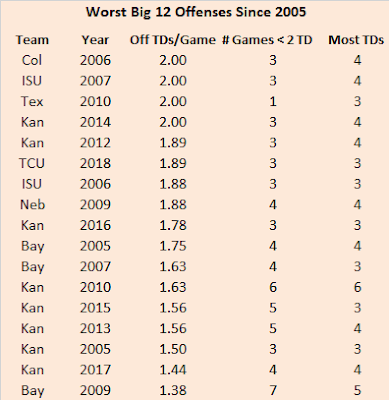 I would like to direct your attention to two teams that really stand out: Baylor circa 2009 and Kansas in 2010. In 2009, sophomore Robert Griffin began the season at quarterback for Baylor. He was injured in their third game (a victory against Northwestern State), but even in his absence, the Bears finished non-conference play 3-1 and had designs on their first bowl bid since 1994. However, the Bears lost their first four conference games while scoring just 34 total points. Then miraculously, their offense exploded in a road trip at Missouri. The Bears scored 40 points and managed five offensive touchdowns in a shocking win. Alas, their offensive firepower was a mirage and the Bears scored just 30 total points in losing their last three games. Outside of that offensive explosion against Missouri, Baylor did not score more than one offensive touchdown in any of their other seven conference games.

Kansas opened the Turner Gill era in 2010 by scoring three points in a loss at home to North Dakota State. They rebounded to beat a ranked Georgia Tech team the next weekend and split their remaining two non-conference games against Southern Miss and New Mexico State. At 2-2, a bowl game was an unlikely proposition, but the Jayhawks had posted at least five wins in six of the seven previous seasons, so few could have predicted the depths to which the program would sink. Kansas opened conference play losing their first four games while failing to score more than 16 points in any one. They looked to be well on their way to a fifth straight loss as they trailed Colorado 45-17 at home early in the fourth quarter. Then suddenly, without warning, the offense found its rhythm. The Jayhawks scored five touchdowns in twelve minutes (four offensive and one fumble return) to shock the Buffaloes. The Jayhawks used the momentum they generated there to score 24 total points over their last three games. The Colorado game, especially the fourth quarter was an amazing outlier performance. In that fourth quarter, the Jayhawks scored four offensive touchdowns. In the other 31 quarters they played against Big 12 opponents that season, the Jayhawks scored nine offensive touchdowns.

Doing research, uncovering surprising statistics, and recalling events that had escaped my memory are the reasons I continue to run this blog. Baylor and Kansas were two bad and unremarkable teams, but their performances in one game and one quarter respectively were truly amazing, especially considering how those teams played the rest of the season. I’m not sure if he was the first to say it, as he may have only popularized it during his stint on ESPN, but Lou Holtz was fond of the adage ‘The kids on the other team are on scholarship too’. Baylor and Kansas are stark reminders that even bad teams have gifted athletes that are capable of remarkable performances.
Posted by matt at 3:25 AM