After six weeks of Power Five action, we return to the Group of Five with Conference USA.

Here are the Conference USA standings. 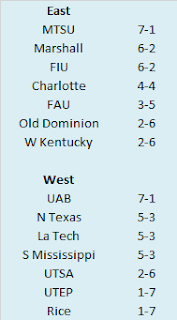 So we know what each team achieved, but how did they perform? To answer that, here are the Yards Per Play (YPP), Yards Per Play Allowed (YPA) and Net Yards Per Play (Net) numbers for each Conference USA team. This includes conference play only, with the championship game not included. The teams are sorted by division by Net YPP with conference rank in parentheses. 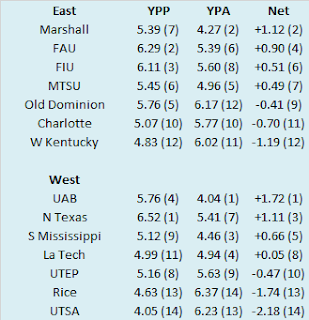 College football teams play either eight or nine conference games. Consequently, their record in such a small sample may not be indicative of their quality of play. A few fortuitous bounces here or there can be the difference between another ho-hum campaign or a special season. Randomness and other factors outside of our perception play a role in determining the standings. It would be fantastic if college football teams played 100 or even 1000 games. Then we could have a better idea about which teams were really the best. Alas, players would miss too much class time, their bodies would be battered beyond recognition, and I would never leave the couch. As it is, we have to make do with the handful of games teams do play. In those games, we can learn a lot from a team’s YPP. Since 2005, I have collected YPP data for every conference. I use conference games only because teams play such divergent non-conference schedules and the teams within a conference tend to be of similar quality. By running a regression analysis between a team’s Net YPP (the difference between their Yards Per Play and Yards Per Play Allowed) and their conference winning percentage, we can see if Net YPP is a decent predictor of a team’s record. Spoiler alert. It is. For the statistically inclined, the correlation coefficient between a team’s Net YPP in conference play and their conference record is around .66. Since Net YPP is a solid predictor of a team’s conference record, we can use it to identify which teams had a significant disparity between their conference record as predicted by Net YPP and their actual conference record. I used a difference of .200 between predicted and actual winning percentage as the threshold for ‘significant’. Why .200? It is a little arbitrary, but .200 corresponds to a difference of 1.6 games over an eight game conference schedule and 1.8 games over a nine game one. Over or under-performing by more than a game and a half in a small sample seems significant to me. In the 2018 season, which teams in Conference USA met this threshold? Here are Conference USA teams sorted by performance over what would be expected from their Net YPP numbers. 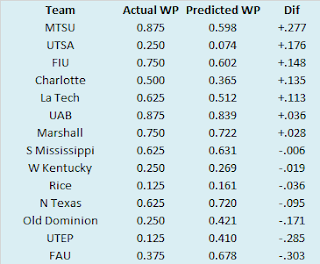 Middle Tennessee State significantly exceeded their expected YPP record and qualified for the championship game for the first time since joining Conference USA. The Blue Raiders nearly won their first outright conference championship as an FBS program but lost to UAB thanks in part to having too many men on the field during a punt return. Middle Tennessee was a solid 2-1 in one-score conference games (prior to their close loss in the title game), but turnovers and non-offensive touchdowns were the reason they were able to exceed their expected record. The Blue Raiders had a league-best in-conference turnover margin of +10 and they also scored three non-offensive touchdowns while allowing none. UTEP and Florida Atlantic were the two Conference USA teams that failed to live up to their YPP numbers. UTEP had a league-worst in-conference turnover margin of -12, finished 1-2 in one-score conference games, and allowed four non-offensive touchdowns while scoring none of their own. For Florida Atlantic, the culprit was close game performance. Of their five conference losses, four came by a touchdown or less. Those four close losses came by a combined fifteen points, while each of their three conference wins came by at least nineteen points.

From the Penthouse to the Outhouse
Going in to the 2018 season, Florida Atlantic was a prohibitive favorite in the east division of Conference USA. And rightfully so. The Owls dominated the league in 2017, winning all eight of their regular season games, with seven coming by double digits, drubbing North Texas in the Conference USA Championship Game, and embarrassing Akron in their bowl game on the way to a school-record eleven victories. Thanks to the, shall we say, interesting career path of their head coach, they even got to hang on to him for another year. A lot of things can go wrong over the course of a football season, but worst case scenario for 2018 seemed to be a second consecutive bowl game. Yet, when December rolled around, the Owls were home for the holidays, having posted a 5-7 overall record (just 3-5 in Conference USA). While it probably wasn’t what their fans were expecting, Florida Atlantic did put together a historic season in 2018. They became just the tenth team since 1998 (the beginning of the BCS era) to finish with a losing conference record one season after going unbeaten in league play. The others are listed below. 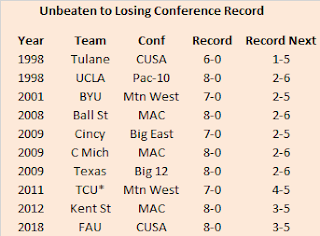 Florida Atlantic is even more unique as they, along with BYU, were the lone mid-major (non-BCS or Group of Five) team to post a losing record despite retaining their head coach. The other mid-major teams on this list (Ball State, Central Michigan, Kent State, and Tulane) lost their head coaches to better jobs after their undefeated campaigns or in the case of TCU, moved to a power conference.

Can Florida Atlantic expect to rebound to their previous status in 2019? To find out, I looked at the follow-up conference records for those nine teams. They are summarized below. 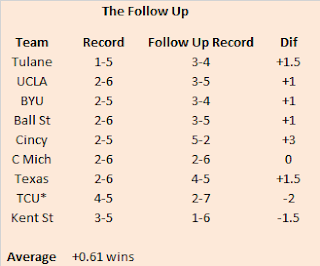 Six of the nine teams saw their conference win total improve after their collapse, two declined, and one finished with the same conference record. On average, the teams improved by about six tenths of a conference win the next season. However, if we remove TCU from the equation, as the circumstances surrounding their decline involved an uptick in competition, the results are a little better. 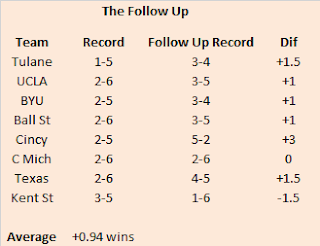 Six of the eight teams saw their conference win total improve, one declined, and one stayed the same. On average the teams improved by nearly one win in conference play the next season. Were I a Florida Atlantic fan, I would feel pretty good heading into 2019. Based on the admittedly small sample here, FAU can expect to improve, albeit probably not to the dizzying heights they reached in 2017. Still, a small improvement in conference play would get them back to a bowl and have them in contention for the division.
Posted by matt at 2:10 AM