Rumors of the Pac-12's Demise Have (Probably) Been Greatly Exaggerated

The Pac-12 has been the butt of a lot of jokes lately. Their football championship game had attendance numbers commensurate with a middle school JV game in Iowa, their football champion has missed the College Football Playoff two years running, their network appears to be going the way of the Prevue Channel (or the go-round channel as my mother calls it), and they may have been in real danger of sending a single team to the NCAA tournament this year. Fortunately, the Pac-12 was able to coax three bids to the tourney after Oregon won four games in four days to grab the automatic bid. I’m not here to suggest ways the Pac-12 can improve its championship game (move it out of Santa Clara), opine on when the conference will land a playoff bid, or offer advice on how to improve the Pac-12 Network, but I will give Pac-12 hoops fans reasons for optimism heading into 2020.

While college football has five ‘Power Conferences’, college basketball has six (and another two pseudo power conferences). Read my post from two years ago for some more background and justification on this (its really good!). Those six conferences (ACC, Big East, Big 10, Big 12, Pac-12, and SEC) account for the majority of at-large bids to the NCAA tournament. How many bids has each conference produced over the past 19 years? Glad you asked. The total number of NCAA tournament bids (at-large and automatic) for each power conference are listed below along with an average number of bids per season. 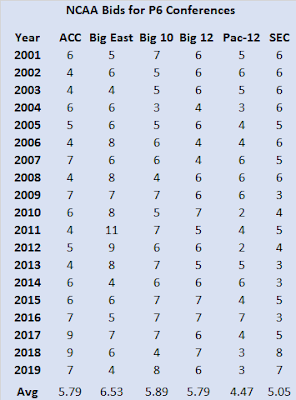 The Big East leads all power conferences with an average of six and a half tourney bids per season. The Big 10, Big 12, and ACC are bunched closely together and have received almost six bids per season, while the SEC has received about five per season and the Pac-12 is last at about four and a half. Alright, so things aren’t looking great for the Pac-12 thus far, but let’s come at this from another angle. Obviously a team that receives a number one seed in the NCAA tournament has been more successful than a team that receives a six seed. In the interest of rewarding better seeds, we’ll award what I have deemed 'seed points' for each tournament bid. A one seed receives sixteen seed points, a two seed receives fifteen seed points, and so on until the bottom of the bracket, where a sixteen seed receives one seed point. Using this methodology, how do the power conferences stack up? 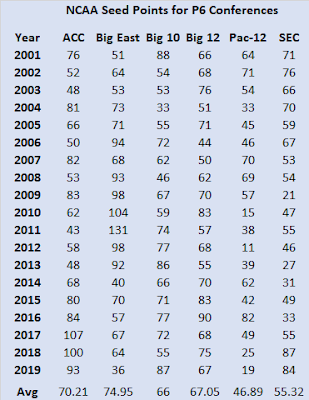 Once again, the Big East is on top, receiving about 75 seed points on average per year. The ACC is a notch below with 70, the Big 12 and Big 10 are close together with 67 and 66 respectively, the SEC is further down the list with 55, and the Pac-12 again brings up the rear with 47. This just seems to further illustrate the point that the ostensible 'conference of champions' has struggled for quite some time. However, I think we need to make one more adjustment. Conference composition has changed a great deal since 2001. In 2001, the ACC had nine basketball playing members. Today, the conference has fifteen. That represents a 67% increase in membership size. To adjust for fluctuating membership size, let’s divide the total number of NCAA tournament bids for each conference by the average size of each conference over this 19 year period. Doing this gives us an average percentage of teams that qualify for the NCAA tournament for each conference.

When we make this adjustment, the Big 12 reigns supreme as on average, more than half of its member schools qualify for the NCAA tournament. The Big 10, Big East, and ACC are all just below 50%, and while the Pac-12 still rates low in this category, a new conference brings up the rear. A similar thing happens when we divide seed points by the average membership size for each conference.

The Big 12 is again tops by this measure with the ACC, Big East, and Big 10 finishing close together. The SEC and Pac-12 are virtually tied at the bottom of the standings. However, as I mentioned in the opening paragraph, there is hope for Pac-12 fans, and they can look to their neighbors as the bottom of this ranking, the SEC, for proof. Scroll back up and look at the first and second table. I’ll wait. Between 2013 and 2016, the SEC received a total of 14 NCAA tournament bids. In three of those seasons (2013, 2014, and 2016), they received just three bids. They also received the fewest seed points of any power conference in three of those four seasons. Yet, in the past two seasons, the SEC has secured fifteen bids to the NCAA tournament while ranking second and third in total seed points. How were they able to do this? They decided they wanted to be good and basketball. They threw money at the problem and hired good coaches. Since the end of the 2013-2014 season, six SEC schools have hired coaches with previous (successful) power conference head coaching experience and currently seven of the fourteen schools have a head coach with previous power conference head coaching experience (and this number doesn’t include John Calipari at Kentucky). If you allocate a few additional resources, success seems to follow. For further proof that the SEC is serious about basketball, look no further than the unemployment line where moderately successful head coaches just lost their jobs. Bryce Drew was fired at Vanderbilt after three seasons and one NCAA appearance. Maybe scratch him from the moderately successful list since the Commodores did finish 0-18 in SEC play this season. Mike Anderson was fired at Arkansas after three NCAA appearances in the last five seasons. Avery Johnson, a successful former NBA coach (and player) was let go by Alabama one season after making the NCAA tournament. Billy Kennedy was fired by Texas A&M despite two Sweet 16 appearances in the past four seasons. The SEC is serious about basketball now.

The ACC will never be the SEC’s equal in football, but the conference has gotten serious about competing in the sport. Clemson has won two of the last three college football national titles (and the conference as a whole has won three of six). Similarly, the SEC will probably not become the preeminent college basketball conference, but they are in much better shape than they were five years ago. Circling back around to the Pac-12, UCLA (arguably the top job in the conference) will hire a head coach in the coming weeks. A return to relevancy can be as simple as making the right hire in Los Angeles. The harder places to win in the conference (Colorado, Oregon State, and Utah) already have good coaches. Imagine if the school with a great location and history did the same?
Posted by matt at 3:26 AM