After a two week break where we talked about basketball, this blog makes its triumphant return to the only sport that really matters - football. This week, we will be examining the MAC.

Here are the MAC standings. 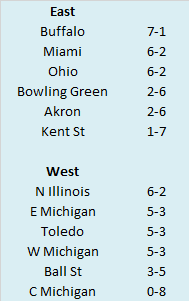 So we know what each team achieved, but how did they perform? To answer that, here are the Yards Per Play (YPP), Yards Per Play Allowed (YPA) and Net Yards Per Play (Net) numbers for each MAC team. This includes conference play only, with the championship game not included. The teams are sorted by division by Net YPP with conference rank in parentheses. 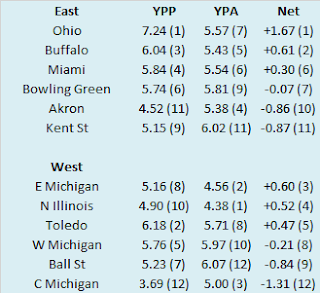 College football teams play either eight or nine conference games. Consequently, their record in such a small sample may not be indicative of their quality of play. A few fortuitous bounces here or there can be the difference between another ho-hum campaign or a special season. Randomness and other factors outside of our perception play a role in determining the standings. It would be fantastic if college football teams played 100 or even 1000 games. Then we could have a better idea about which teams were really the best. Alas, players would miss too much class time, their bodies would be battered beyond recognition, and I would never leave the couch. As it is, we have to make do with the handful of games teams do play. In those games, we can learn a lot from a team’s YPP. Since 2005, I have collected YPP data for every conference. I use conference games only because teams play such divergent non-conference schedules and the teams within a conference tend to be of similar quality. By running a regression analysis between a team’s Net YPP (the difference between their Yards Per Play and Yards Per Play Allowed) and their conference winning percentage, we can see if Net YPP is a decent predictor of a team’s record. Spoiler alert. It is. For the statistically inclined, the correlation coefficient between a team’s Net YPP in conference play and their conference record is around .66. Since Net YPP is a solid predictor of a team’s conference record, we can use it to identify which teams had a significant disparity between their conference record as predicted by Net YPP and their actual conference record. I used a difference of .200 between predicted and actual winning percentage as the threshold for ‘significant’. Why .200? It is a little arbitrary, but .200 corresponds to a difference of 1.6 games over an eight game conference schedule and 1.8 games over a nine game one. Over or under-performing by more than a game and a half in a small sample seems significant to me. In the 2018 season, which teams in the MAC met this threshold? Here are MAC teams sorted by performance over what would be expected from their Net YPP numbers. 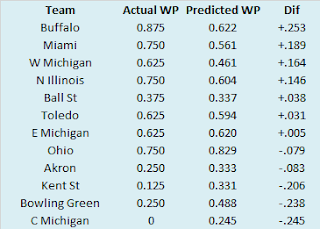 Buffalo was the lone MAC team to significantly exceed their expected record based on YPP. The Bulls were not exceptionally lucky (1-0 in one-score games), nor were they fueled by a fluky turnover margin (+1 in conference play). They simply were not quite as dominant as we might expect from a team that lost just once in eight conference games. On the flip side, three MAC teams significantly under-performed relative to their expected record based on YPP. Bowling Green, Central Michigan, and Kent State finished a combined 1-8 in one-score conference games and the lone victory came in a game played between these teams (Kent State edged Bowling Green in October). Those three teams were bad, they just weren’t quite as bad as their respective records. 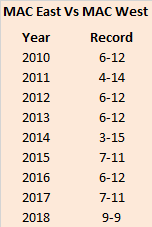 Which MAC East teams have been most responsible for this ghastly record over the past nine seasons? It really has been an equal opportunity performance them. Between 2010 and 2018, eight teams spent time in the MAC East. Akron, Bowling Green, Buffalo, Kent State, Miami, and Ohio were fixtures in the division, but Massachusetts (2012-2015) and Temple (2010-2011) also vacationed there. How did those teams do against the MAC West? 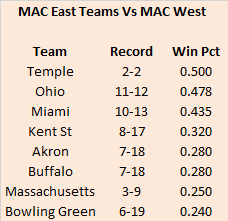 Was 2018 an outlier or will the MAC East continue to close the gap on the MAC West and usher in a new era of competitive inter-division play? Stay tuned to ESPN2 on November weeknights to find out.
Posted by matt at 3:22 AM