Our offseason sojourn keeps churning through the Group of Five. This week we are examining the Mountain West.

Here are the Mountain West standings. 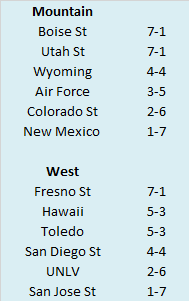 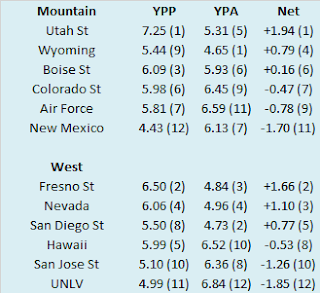 College football teams play either eight or nine conference games. Consequently, their record in such a small sample may not be indicative of their quality of play. A few fortuitous bounces here or there can be the difference between another ho-hum campaign or a special season. Randomness and other factors outside of our perception play a role in determining the standings. It would be fantastic if college football teams played 100 or even 1000 games. Then we could have a better idea about which teams were really the best. Alas, players would miss too much class time, their bodies would be battered beyond recognition, and I would never leave the couch. As it is, we have to make do with the handful of games teams do play. In those games, we can learn a lot from a team’s YPP. Since 2005, I have collected YPP data for every conference. I use conference games only because teams play such divergent non-conference schedules and the teams within a conference tend to be of similar quality. By running a regression analysis between a team’s Net YPP (the difference between their Yards Per Play and Yards Per Play Allowed) and their conference winning percentage, we can see if Net YPP is a decent predictor of a team’s record. Spoiler alert. It is. For the statistically inclined, the correlation coefficient between a team’s Net YPP in conference play and their conference record is around .66. Since Net YPP is a solid predictor of a team’s conference record, we can use it to identify which teams had a significant disparity between their conference record as predicted by Net YPP and their actual conference record. I used a difference of .200 between predicted and actual winning percentage as the threshold for ‘significant’. Why .200? It is a little arbitrary, but .200 corresponds to a difference of 1.6 games over an eight game conference schedule and 1.8 games over a nine game one. Over or under-performing by more than a game and a half in a small sample seems significant to me. In the 2018 season, which teams in the Mountain West met this threshold? Here are Mountain West teams sorted by performance over what would be expected from their Net YPP numbers. 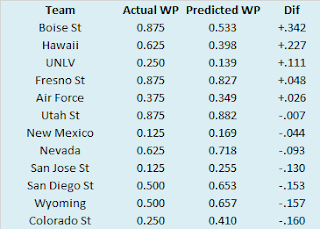 Boise State and Hawaii were the Mountain West teams that significantly exceeded their expected record based on YPP. The reason for Hawaii’s resurgence was simple: they were great in close games. The Warriors were 4-0 in one-score conference games and their other conference win came by just nine points. Contrast that to their losses which all came by at least eighteen points. For Boise State, no one thing stands out, but coupled together, several small factors helped them exceed their expected record. The Broncos were a solid 2-1 in one-score conference games, had a +6 turnover margin in conference play, and were +3 in non-offensive touchdowns in conference play. One non-offensive touchdown proved to be the difference in them winning the division. A 99-yard interception return against Nevada provided the margin of victory in their win against the Wolfpack and allowed them to steal the division when they beat Utah State in the regular season finale.

A Step-Back for Boise?
After compiling the YPP data for 2018, I was surprised Boise State ranked so low. The Broncos were not a bad team, but they did not have the profile of a dominant team either. Yet on the first weekend in December, they were once again hosting the Mountain West Championship Game for the second year in a row and third time in the game’s six year existence. To contextualize just how much Boise State’s actual record exceeded their expected record based on YPP, I went back and looked at all mid-major (non-BCS and Group of Five) teams since 2005 that exceeded their expected record by at least .300 (remember, I consider a difference of .200 significant) and finished with a conference winning percentage of at least .875 (7-1 in an eight game conference schedule). I added this extra qualifier because I wanted to look at teams that not only exceeded their expected record, but were also in contention for their conference title. In other words, I wanted average teams that finished with great records instead of bad teams that finished with average records. So how unique was Boise State in 2018? They were only the sixth mid-major team to exceed their expected record by at least .300 and win at least seven of their eight conference games. Boise and the other five teams are listed below along with their conference records the following season.

Obviously, this reeks of small sample size, but the results should not be encouraging for Boise State fans. The other five teams on this list all declined by at least two games in conference play the next season and the average decline was over three games (3.1). The Broncos do have a better and longer track record than these five teams. All five were coming off losing seasons when they significantly exceeded their expected record, with UCF fresh off a winless campaign when they surprised the nation by nearly winning Conference USA in 2005. Meanwhile, the Broncos have not won fewer than eight games in two decades. Still, they are losing a four-year starter at quarterback and their defensive YPP was the worst (in terms of actual yards per play and conference rank) it has been in the fourteen years I have been tracking YPP data. The Broncos will likely open as the Mountain West favorite when odds are released in the coming months, and they will be an even more prohibitive favorite to win the Mountain Division. I wouldn’t place a bet on one of the other teams in the division (Air Force, Colorado State, New Mexico, Utah State, Wyoming) to win it individually, but collectively, I would take the field over the Broncos to represent the Mountain half of the conference in the championship game.
Posted by matt at 3:27 AM